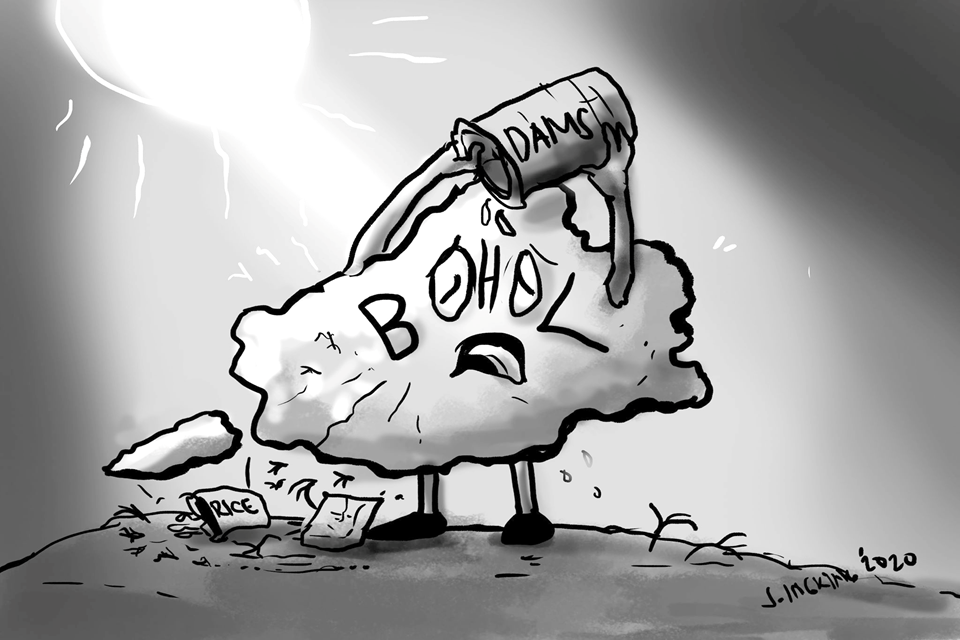 FOR MUCH OF THE LAST TWO DECADES,  Bohol has been served well by the four big dams we had- there was no need to damn them (pun intended).

Despite the fact that half of the rice lands in Bohol depended on rain  (it rains or it shines), the other half was served by the four huge dams. They were: Bayongan (San Miguel) serving 5,300 has,; Malinao (in Pilar) 4,600 has,; Capayas ( Ubay) 750 hectares and the smallerZamora Dam (Talibon).

The damns helped Bohol become the “rice basket” in the Visayas and for years Bohol was self-sufficient in rice and “exported” some to nearby provinces.

(Of course, everyone is aware that when the dreaded El Nino attacks, Nature is induced by cloud-seeding to bring rains direct to the farms and to complement the water level obtaining in the dams. Cloud-seeding is not cheap- several million pesos per activity.)

Last year, the Rice Tarrification Law (RTL) was passed fast to arrest inflation (caused by the rice shortage that resulted in high prices) and the SRIP ( Small Reservoir Impounding Project) was perfected that suited Bohols terrain, according to experts – they were better than the big dams.

The RTL favored food (rice) security for 107 million rice-eating Filipinos over the parochial needs of some 10 million rice farmers. The government realized that we are a large rice-eating nation but we can never quite produce rice cheaply compared to how Vietnam and Thailand can.

Based on one literature read, the production cost of paddy rice here is at P13/kilo and the latest in the 2019 RTL debate, the figure was P17/kilo.

That can never compete with -according to a book published in 2016 ( Competitiveness of Philippine Rice in Asia)- which pegged Vietnam’s rice production cost way down at P6/kilo and that of Thailand – 50%subsidized by the government making it one of the world’s biggest rice exporters.

Rice -dependent folks in Bohol (240,000) have been asked to plant alternative crops like vegetables and learn more from Korea’s KOPIA and PhilRice for better rice yields. And wait for the implementation of the Rice Stabilization Fund (P10B).

That will take some time to do, True enough, last year in 2019- the US Department of Agriculture- Foreign Agriculture Services ( USDA-FAS) cited that the Philippines was indeed the biggest rice importing nation of earth at 3 million (Metric Tonnes) even eclipsing the 1.4-Billion Mainland Chinese who only imported 2.5 Million (Metric Tonnes)

In short, Watson, it is like banging our heads against the wall to even try to produce rice because we need it daily when many countries nearby can sell it landed cost here- much cheaper than we can produce it. Pray, tell me, Watson, what then would monumental dams be for?

One can argue they can be used to irrigate other crops- that needs validation if they demand the same irrigated water supported as rice does.

On the second point, even the NIA (National Irrigation Authority) in the region has accepted the economic dynamics of SRIP and inaugurated two big ones in Bohol in the recent past: Last year was the P 1.2 Billion Benliw SRIP covering 400 has of rice land and another cost P725 Million in Cayacay Mabini. Do we go back to the Big Dams Syndrome?

It will take another longer Editorial to tackle the recent scientific findings of the ecological and environmental cost of putting big dams in Africa. Suffice for now to say – that SRIP is less expensive than the big dams and will cause lesser displacement of people when implemented.

We recall that one of the main advocates of SRIP then was Vice Governor Julius Herrera (younger brother of the late Boholano senator Boy Herrera). He seems vindicated currently in this instance.

From the grapevine, we heard that many towns in the affected districts seem to be more in favor of the SRIP than the Big Dams. To recall, the top town rice producers are Pilar, San Miguel, Ubay, Sierra Bullones and Dgohoy with the runner ups: Alicia, Carmen, Talibon and Buenavista.

Of course, in hindsight, our vision is always perfect. But at the time of even the late Rep-Governor Rico Aumentado, the P4.1 B Northeast Basin Agri-Tourism Project was a “perfect package” that enabled a one-time effort to cover 19,000 has. of new rice irrigation (per his successor, current Rep. Aris Aumentado), a water and land-based tourism project, a filtration for potable water and a 10 Megawatt renewable energy project.

But present realities may have altered such noble a cause.

We are aware that there is huge Chinese Government money to the tune of P42. Billion ready to finance the so-called “flagship irrigation projects” in the Philippines during the term of President Rody Duterte including those in Ilocos Norte and Abra, Panay River, Ilocos Sur, Cagayan Valley and then the P4.1 Billion in Bohol.

Even the NEDA ( National Economic Development Authority) is endorsing the US$8M or P250 M Feasibility Study on the Bayongan Multi-Purpose Dam.

The possible prospects for funding, it has been mentioned – will be from the National Government, Official Development Assistance Funds (ODA) or a PPP (Public-Private Partnership).

In our modest assessment, the “irrigation” aspect of the project will have to be minimized in the final blueprint. And if the Tourism-Potable Water- Flood Control- Power Energy combination would be deemed feasible by the study- it would best that the Project be lodged under a PPP hybrid arrangement.

That will entail, to our minds, just a mere  50% government participation and would be justified since the element of rice production (engendered by irrigation)- a staple food of Filipinos  -will no longer be in consideration.

This is with due respect to Rep. Aris who may- even now- already have developed a new Program Strategy in the light of many rather substantial developments in the economy.

Are the days of the Big Dams in Bohol over? It looks that way from where we sit.

Although we are prepared to be proven otherwise as wrong by the experts.