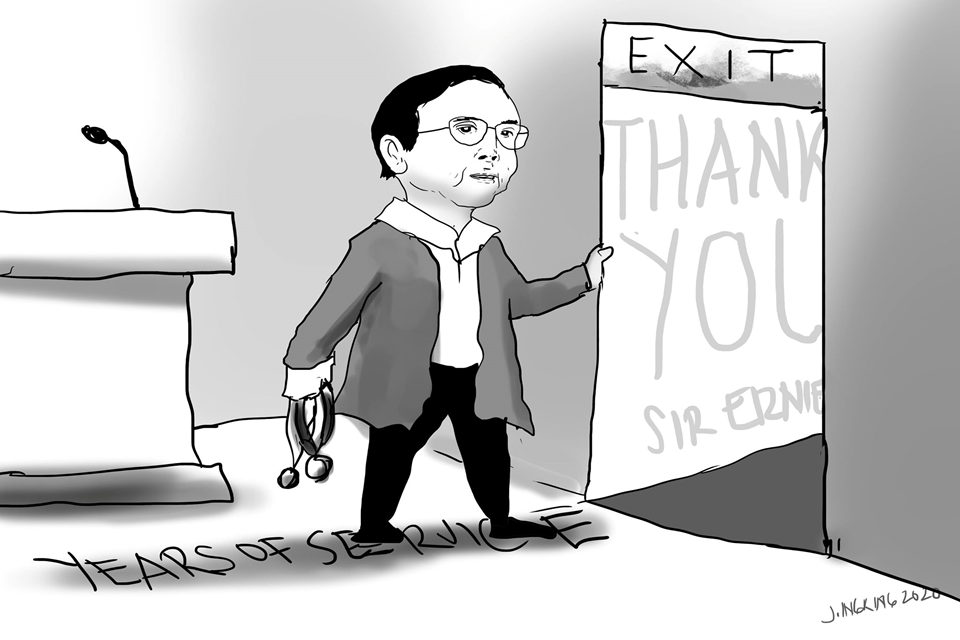 HE WAS NEVER ELECTED Governor of Bohol. But in his close to four years’ journey as Cabinet Secretary, he had intervened positively for many projects for the land of his birth which he once grew in -in its deprived state. He need not be a governor, in fact.

Due to policy differences with some Cabinet secretaries and personal reasons, Dr. Ernesto Pernia (of this city) quit last Friday as the country’s chief economic czar at a time when the country was battling a global pandemic. People can only surmise that as part of the Task Force to combat the health malady, there must-have been an acrimonious tug of war between the policy issues of public safety and revving up an emasculated economy among its multi-discipline members.

Since there were no public disclosures, one can only surmise that the economist in him (former lead economist of the Asian Development Bank) must have seen the dire consequences of policies that will further constrict the economy under an extended lockdown scenario. The nation may not have a second-round to fight for

Pernia, who earned his masteral and doctorate degrees in Economics in American universities, must have been so frustrated with the negative turn of events after many sound fiscal, monetary and economic policies in Noynoy and Rody’s administrations that successfully brought the abominable poverty level of the country down to 15%.

Pernia, who left as Chairman Emeritus of the Economics Department of the University of the Philippines to accept the cabinet post, had extrapolated that from a forlorn Third World Country, the trajectory of growth pointed to the Philippines becoming a middle-ranked country in 2020 – until Covid-19 arrogantly stepped in. A healthy middle class was slowly shaping up for Team Philippines.

Even if Dr. Ernie spent many years outside the province, he was, in his heart of hearts, a Boholano who told us he will not hesitate one bit to do everything in his power to propagate things-Bohol.  In the last many years, Pernia and some of his siblings always came home to welcome the New Year in our island province.

If he could not directly expedite through his lofty government position, he directed those who sought his help which switches to turn on to get their programs and projects off the ground. He, too, was an honest government official.

Pernia knew his numbers and the socio-economic impact of projects as well as the natural lethargy of government bureaucracy – that’s why he lent his weight to get projects off the ground. He is also an open-minded development economist. Whence before, he was a bitter critic of the Bohol international airport, but once convinced of its merits- he made sure alongside the DoTr that the long-gestating environmental airport will be brought to fruition.

The time capsule being laid down as early as during the time of President Gloria Arroyo, there were still critics saying the airport was just for show for mileage during approaching electoral polls and would never take off the ground- but it did, inaugurated no less by the beaming president of the republic Rody Duterte.

NEDA’s support extended to the erection of a second floor to the terminal that will house the tube to carry passengers directly to the airplane’ s hull, needing an additional budget appropriation. NEDA’s Investment Committee had to recommend that first.

Pernia was also part of the reason for the speedy approval of the Gallares Hospital modern medical complex in Cortes with a budget of P 2.3 billion, now partly included in the 2020 national budget on a multi-year funding scheme.

He was active in the UP Bohol Advisory Council, composed mostly of stalwarts of the premiere state college (while he was a professor) alongside the likes of former UP president Dr. Jose “Pepe” Abueva.  The advisory body was created during the incumbency of Governor Edgar Chatto, who was a one time student of the resigned secretary. He is expected to remain in the advisory board despite his departure from a pivotal post in the Duterte government.

Pernia’s legacy will be remembered. For many decades a staunch advocate of sound population management, he moved for the funding of the Reproductive Health Act. When everyone else was fawning to please a newly minted president who had Federalism as one of his campaign promises, the independent-minded Pernia stood his ground against it.  The budget strain it would entail on the nation’s finances would transform the new-fangled form of government into a modern Frankenstein.

As policy maker Pernia supported the sets of Tax Reforms- the windfalls of which were to partly fund the ambitious Build Build Build program to usher the nation into a modern economy. He made known his opposition to the xenophobics that we needed foreign investment liberalized in the fields of real estate, utility, media and education. Likewise, he was against the stringent foreign ownership limits in Philippine companies that had driven foreign investors away from our shores.

When the water crisis erupted, Pernia proposed the creation of the equivalent of a “Water Department” to efficiently manage the direction of such an important component of national life: water. It is known that he has lent his support to make safe, stable potable water be made available for Bohol -as we still have a number of waterless communities as defined by the National Anti Poverty Commission.

At 76 years old, Dr. Pernia may no longer be the spring chicken that this tennis and golf player used to be, but he chose to sacrifice his health and join the government in an effort to make part of the last chapters of his life meaningful for the nation and Bohol.

His late amiable dentist-father Nong Juaning Pernia (of this city) could not have been more proud.