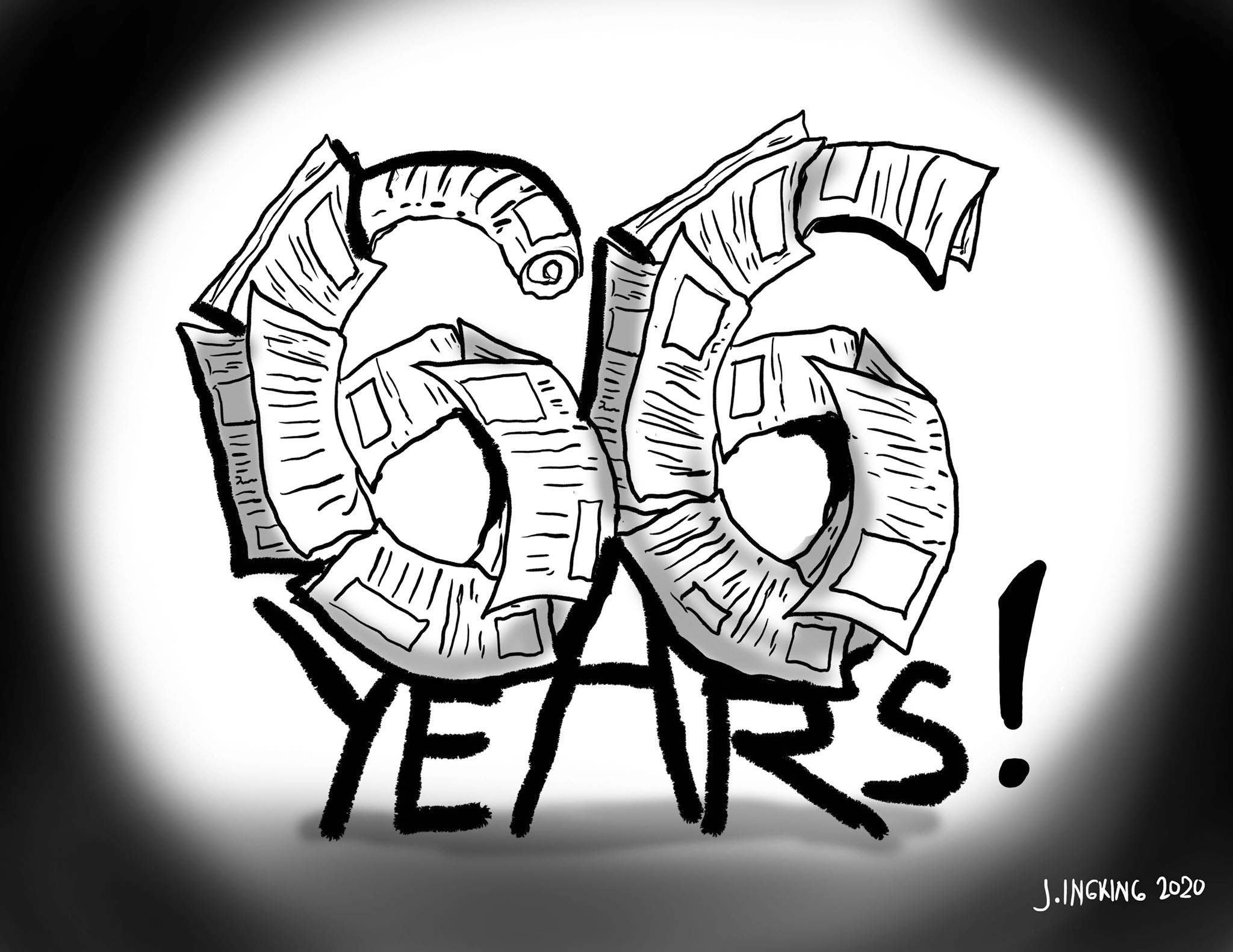 OVER A QUIET LUNCH  yesterday with the staff,  the BOHOL CHRONICLE silently renewed our pledge of dedicated service to the Boholano community as we turned 66 years old.

The average life span of the Filipino is now 71 years old as of 2017. Therefore, from the biological and newspaper longevity points of view, the Chronicle is not young.

Depending on one’s bias, one can say the paper at 66 has become arthritic or has become savvier and battle-scarred for years -struggling to come out every Sunday- except for one Sunday following the Martial Law declaration- come hell or high water.

We can be corrected but the Chronicle could probably be the oldest provincial community newspaper weekly in the Philippines today.

Truth to tell, doomsday oracles have predicted our death twice. First,  was when this started in May 1954 as a two-page machine-pressed newspaper- where the “Father of Bohol Journalism”- founder-publisher Jun Dejaresco was a one-man show.

A concerned priest predicted the paper will die a natural death. Either due to the lack of advertisers and readers or Dejaresco due to exhaustion and disappointment. Dejaresco died at the ripe age past 80, with his boots on, so to speak.

The second prediction of the  Chronicle’s death was to come after the demise of Jun Dejaresco to the Great Beyond in 2002- that the second generation will fall short of the legal acumen, hands-on management and perfectionist discipline of the old man.

But it would also be a false sense of modesty- that after bringing a small paper to over 40 pages in this generation- that we did not bear proudly the torch that has been passed. It would also be an insult to the scores of reporters, printing and administration staff who made sure the paper lived up to its billing the last past 18 years.

In fact,  with the advent of newfangled technology, the paper now has both the hard copy and digital versions with a more expanded coverage of things Bohol- from where the Grand Old Man left. Perhaps in the future- the paper will be purely digital in form- but the content will remain the same.

And content is what we are proud of. From the news pages and the soul of the paper (Editorial) plus the various opinion-makers and our Lifestyle section. Certainly, the paper’ s evolution was not an accident.

Yes, there will be threats from other sources of information from social media. But we have been seasoned by years of grinding our nose to the mill to be able to separate facts from the fancy. Fake news may proliferate but the purveyor of truth will be listened to -and eventually prevail.

And the closest we can get to the elusive truth is to have our facts straight. And to offer parity by giving all sides of the issue their day in court (in our paper, that is).  We are- in short- not scared of competition but welcome them.

It is a  necessary clearing process that separates the chaff from grain; the boys from men. Credibility is everything.

No, we will never pretend to be a national newspaper even if sometimes we comment on national issues. It is the Chronicle’s kinship with the Boholano community that makes us one of and with you- in spirit and in truth. We belong.

For instance, a tricycle driver who returns P50,000 in cash left by an unwitting passenger here does not mean anything in a national paper. In a community newspaper, it is a clarion call for all to emulate and a renewal in the belief of the goodness of the human spirit among our townsfolk.

Of course, while bad news bears, there is good news here. Landmark achievements, personal heroism and success in industries and government are also noted alongside the plethora of bad news like crime and corruption.

The paper has survived calamities -like storms, earthquakes and floods- and even lived 66 years -strong enough, in fact, to record the tales related thereto.

Financial pressure is also always there- the increased cost of production (paper and ink), power, and inflation- generated rise in expenses for salaries and overhead items. Remember that a newspaper is also a business that needs to have its neck above water to survive. Although we maintain service, not profit is our main motive.

But we just understand that for one to become a tool of public service, an entity must first survive in its corporate life.  A dead man tells no tales- neither does a dead newspaper.

Political and other pressures are another type of Damocles sword that hangs over the heads of newspapers anywhere. Libel cases,  death threats and even actual attacks on life and property of media are commonplace.

We are in possession of 66 years of hardbound copies of the newspaper in our building that we hold dear like our lives. It is our proof that we are a living chronicler of the life and times of Bohol for 66 years.

Within those pages, one can also see a glimpse of a long history of this paper sometimes riddled with stories about many attempts to put political and business pressure by strong-armed men as governors, congressmen, city and town mayors on this newspaper.

It is natural for media and government so sometimes be at odds as our role as Fourth Estate demands of us to be a fulcrum for check and balance versus those in power. As it were to be a great venue to give “voice to the voiceless” and be the Great Equalizer in ” comforting the afflicted and afflicting the comfortable.”

This continuing saga of this paper to fight oppression through libel, death threats and tax harassment will never end- for life-and every successful fight against them- is yet another added badge of courage that every media institution should proudly bear on its chest.

When it comes to freedom of expression, speech and dissent, we do not intend to introduce cowardice as part of our vocabulary.

But at the same time, we acknowledge the paper is not perfect. Not in grammar, syntax and appreciation of facts. Please do correct us when we are on error’s end. Only God is perfect.

As we celebrate our 66th birthday, we sincerely thank our readers and advertisers.

For a newspaper without readers is but an exercise in intellectual self-indulgence and the paper is merely a good candidate as a wrapper for fish and meat in the wet market.

For to be 66 years old today and “staying alive” as John Travolta gyrates is proof we have loyal readers who develop heart palpitations (including exaggeration) when we are not yet in the streets by 9 am Sunday morning.

Without readers, there will also be no advertisers. We sincerely thank them both today.

In return for this allegiance by our readers and advertisers, we have tried to honor the business model of giving a product that offers value for your money. Of that we know is true since we are able to sell every single copy that we print – that we have no more complimentary or free copies to give to government offices, seaports or airport terminals and (good gracious) even during funerals and wakes as we see some do. How low a level can one get?

It is not immodest to say the Chronicle is the No 1 paper in Bohol – even if we do not count the “pass on” readership which converts the paper into a “nagum-os” version from too much readership at the end of the day.

But one does not have to take our word for it. In the latest HNU survey of Bohol newspapers last year, the Chronicle was surveyed to be read by 95% of respondents and the remaining 5% to the rest.

Further, under the second generation, the Philippine Press Institute ( the most prestigious group of daily and weekly papers nationwide) already crowned the Chronicle with (four national awards this decade) for weeklies nationwide:(2012) Best Editorial Page, 2013 ((Best in Disaster Reporting), 2015  Best in Arts, Culture and History) and once again (2018) Best Editorial Page. We rest our case.

Today is Sunday and we pray to the Almighty to spare us from grave trials and even from self-pride that gives us the mistaken notion that we can go this far without Him. We also pledge never to assume a sense of self-entitlement in society just because we have rendered service to it.

As much as possible, we will remember to keep in our hearts favors given to us but will immediately forget favors we render others. They were probably just part of our calling.

Today, we are choked by clouds of uncertainty with medical and economic dark clouds hovering us. Even our paper has become thinner for practical reasons.

But like in every clime – good and bad- you and we are in this together.

We are onboard the same ship that we must not allow to capsize.

But during bad weather, they say the Pessimist always says we will all die; the Optimist hopes the weather will improve. Join us as we become the Practical One who simply just adjusts the sails of our ship to reach our common direction.

In any language- ladies and gents- 66 years is quite a long time. But- it was a joy growing old with you. Shalom!

DOUBTLESS, TOURISM IS AN IMPORTANT cog of the Philippine economy. No one will object to any bid to resuscitate the comatose… 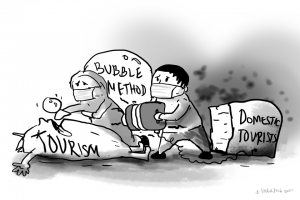