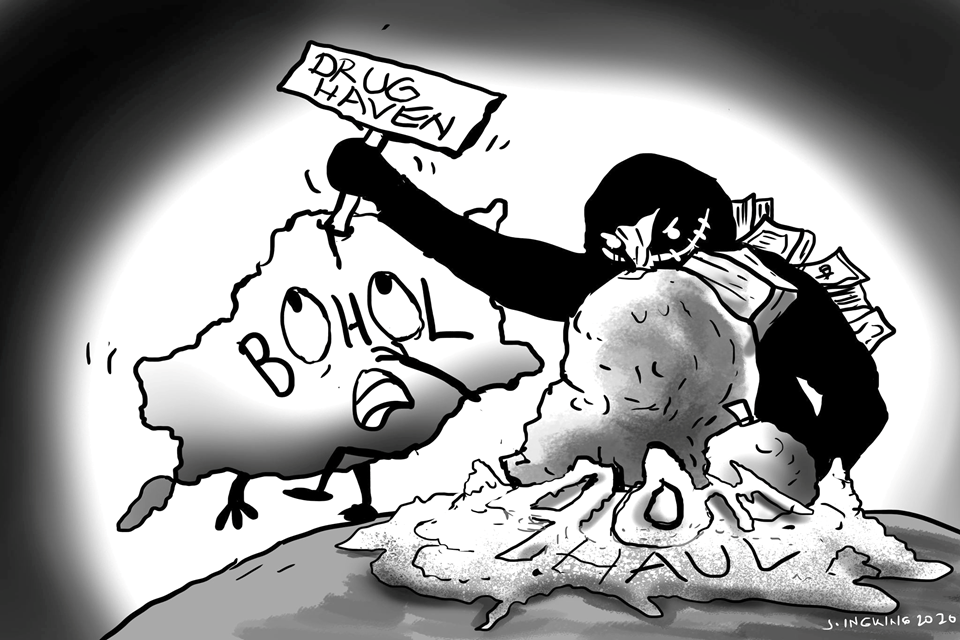 IT WAS JUST THREE MONTHS AGO, that Governor Art Yap may have felt in his bones that something’s brewing underneath in the drug trade in the province- but he cannot quite seem to point a definite finger.

So, in February, he bluntly asked the PNP-PDEA during the PDAC (Provincial Drug Abuse Council) to give him the real lowdown- not embellished public relation remarks nor alarmist grandstanding on the Bohol drug trade.

It was a good question to ask because not too long ago, the authorities were bragging about their numerous buy-bust operations in the anti-drug war of Duterte (based on facts) here that it provided a left-handed compliment to Bohol which in turn was classified among the top provinces proliferated with drugs.

Indeed, what’s there to bust if there are no drugs?

In the February meeting, Yap was assured that unlike in the past wherein 50 grams of shabu in a buy-bust was commonplace, now it was just 5 grams. Well and good. The drugs in Bohol must have disappeared?

There were, of course, doubting Thomases. Why? It was acknowledged that 11 (in all three districts) of the 47 towns -barangays were not classified as “drug-free” (that is the converse of being drug-influenced.)

They included the towns of Bien Unido, Carmen, Corella, Cortes, Inabanga, Loay, Mabini, Panglao, Sagbayan, San Miguel and Ubay. But recently there were relatively fewer buy-busts. Were the LGUs and their police force busy mending the fences that the Covid pandemic destroyed?

No one seemed to know except newcomer Acting PNP Provincial Director Colonel JoselitoClarito- who in less than two weeks- busted a nefarious conjugal drug trade in Tagbilaran and Talibon (This town is not even in the 11 pointed towns) operated by couples Jaime and LilitDajao – the loot weighing 6 kilos.

In the language of the Dangerous Drugs Board at P6.8 million per kilo that is valued at least P40 million, reaching the street end-users at P 20 million per kilo or a whopping P120 million in value- definitely one of the biggest hauls here.

Unless the operators are well-connected, how did this stupendous amount of drug find its way in Bohol- lock-jawed by a lockdown, no vessels and planes allowed in except cargo ships with stringent entry protocol for people? Even a town mayor had offered P5,000 to those who can catch someone who tries to enter their territory illegally through the shores.

Yet, Col. Clarito seemed to know what everybody seemed oblivious to- a P120 million drug cache. The logic, Watson, is no one drops such amount of illegals here if there was no market for it here. Well, you have the 11 towns to start with. And perhaps a few in the city and some resorts.

Should Bohol be shocked or just accept it that Bohol has gone back to where it once was? Or has the market dried up so much as people no longer have much money or time because of the pandemic environment?

Then that being so, the couple drug dealers took exceptionally reckless moves and dealt with strangers for even a huge amount as P1.5 million in that buy-bust? How much of those similarly frozen illegal drug assets are still in Bohol bodegas waiting to victimize other addicts more as things normalize a bit?

Kudos definitely goes to Col. Clarito- for the quick intelligence and swiftest of the drug operation. He bears watching from here on. And you, druggies, your man is here. Scram while you can.

A side issue that erupted therefrom was a statement allegedly made by the Chairman of the Peace and Order Committee of the provincial council BM Ricky Masamayor who wanted to get a list of judges and lawyers handling drug cases- perhaps especially those that resulted in exoneration.

Are these records a matter of  a “public document” profile and therefore cannot escape public scrutiny?  Did BM Masamayor only want to get these facts perhaps in aid of legislation? Masamayor said he had no malice in mind in trying to ferret out that list- definitely not to harass the lawyers and the judiciary.

The Bohol IBP had issued a statement (found in this issue) condemning his statement while other lawyers demanded an apology or retraction of the statement of Masamayor. In part, the IBP said a lawyer cannot decline a person despite his (the lawyer’s) opinion regarding the guilt of such a person.

Lawyers are like other professionals like doctors – for instance, who cannot refuse an operation on a life-threatening gunshot wound even if the patient had already confessed to a recent murder. Facetiously, one can say, better the prostitutes who reserve the right to choose their clients.

Many drug cases also often do not prosper because of the weak evidence or presentation of the prosecution team or the manner the buy-bust operation was conducted by authorities. While the “plea bargaining” recourse is a matter of legal right of the accused unless this avenue is overturned by the Supreme Court, the IBP statement said.

As of press time, the Chronicle did not yet receive a formal, official complaint from the alleged “drug judges” apparently also alluded to by the legislator’s rather controversial statement.

One thing is certain, we have not heard the last of the P120-million drug bust and its implications on Bohol as a drug haven and the Masamayor Statement on drug judges and lawyers. Let’s hear more voices rise these coming days.