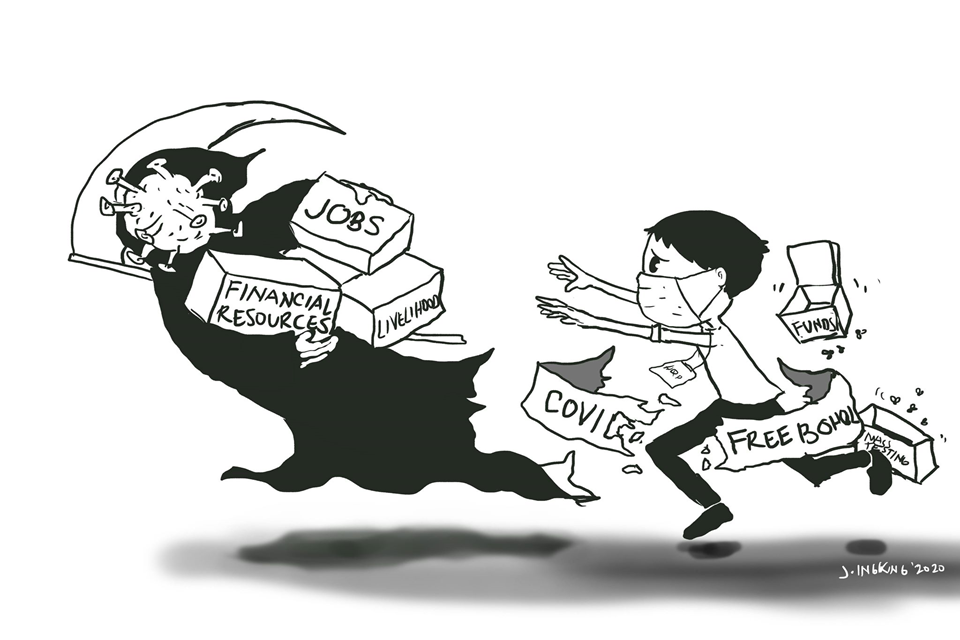 “WHAT GOOD IS THE HAY,  when the horse is already dead?” is an idiomatic expression punctuating the futility of certain things.

Of course, we understand the recent intense fear of Boholanos having heard just last Thursday of two Covid positive victims. Understandable, because Bohol has always been painted as the “Covid-free” paradise all these months.

Perhaps, if the testing kits were here months earlier, perhaps, there may already have been victims identified as early as April to the point that saying we have two Covid positive victims may no longer be a source of shock. But be that as it may.

Sometimes, we come across the feeling that we can at times be over-reacting over the pandemic fear. Often, it is the so-called “fragile health care” system in the country that has been used as a banner to justify the over-anxiety in the protocol of handling the Covid issue.

Death is not just the absence of physical life. There are other deaths borne out of hopelessness over the loss of livelihood and jobs- without which they can not attend to the daily demands of man’s survival and even to address the other common illnesses that had befallen man since time immemorial. They can die of those diseases, too, if one does not have enough financial resources.

Maybe it is because we are not doctors but more of business economists/journalists that we sometimes feel we could be presaging our own destruction in our over-anxiety. Bohol was earlier “touted” to have exceeded the annual 6% GDP rate of the country and bandied abouta 9% p.a  GDP growth rate. Where is Bohol now?

That was before many of our OFWs were sent home as jobs were closed and even Boholanos in other Philippines cities could have been retrenched or their businesses affected- leaving nothing to send back to the Bohol economy to their kin. This was also before the Rice Tarrification Law impoverished thousands of our rice farmers.

This was before Tourism, the flag-ship of the Bohol economy was thrown into its death throes alongside its ancillary allied industries as food, transport, service and others servicing the Rest and Recreation industry.

Of course, one feels rightly proud of being the least affected Covid populace hereabouts. But have we actually counted the actual cost to the people?

Aren’t some of our policies a bit elitist that assumes people have enough savings to last for days and weeks and it is alright to be without income for over two months and rely on scant government dole-outs? One talks of liberal loans at zero interest- but one day who is going to pay for the loan principal that became necessary due to losses over an act of nature not of man’s making?

One talks of reviving the local economy but the chaos that prevails over the policies of LTO over public transportation here and the absence of an LFTRB office in Bohol ( go to Covid -rich Cebu?)  totally ignores the fact that unlike many public officials, the common man commutes to office and livelihood using public transportation.

Balikbayans from abroad who wanted to visit kin and bring in money to Bohol told us that they were so discouraged by the once stringent quarantine days at the place of landing and another in one’s place of birth.  What- 28 days of quarantine to spend 10 days with next of kin? Good, the Holy Spirit descended on public minds and saw the quarantine at home being made voluntary on the LGU and not as a matter of course.

And on the national level- what’s the fuss about a 10 pm curfew? And yet at the break of dawn, people like locusts go out into the streets looking for transport to go about life and business. A quip once remarked if indeed the curfew was meant to answer the fact that Covid-19 is really operating on the night shift.(Laughter).

Married couples, live-in partners and even families in squatters sleep nose-to-nose with each other each frigging night and riding on the back of motorcycles with each other is banned the next day? With no alternative transport in sight?

Except for Spain which has temperate weather, the rest are fairly cold-weathered nations. And the other valid reason Spain is there is probably because it is almost 100% dependent on tourism for its GDP- indicating a massive number of foreign visitors every day.

And why are the countries say the ASEAN which are near the tropic center reporting little in infections, daily cases and deaths like Vietnam, Cambodia, Malaysia, Indonesia, Thailand and the Philippines? Nothing to do with the weather?

As of the last count, the Philippines only has over 21,000 cases and less than 1,000 deaths. Is this Covid-19 really worth its aggravation, just asking in our non-medical minds?

In truth, two victims found positive here should not be a source of panic. Then, there are talks to revert back to ECQ from GCQ- in God’s name for what? That is why 76% of those interviewed in Tagbilaran by Night are vehemently against it

That radio audience is the “madlang people” talking.  Some of that 76 % may be are part of the folks who feel the burning sensation in the stomach when food is not enough and do not know where to get the medicine for Tatay and Nanay nursing various maladies – of course, not of Covid 19.

Is the virus equal to or smaller than our fears?

Someone provided us some statistics, and any and all can validate these findings. Worldwide, the total deaths since the pandemic started in Wuhan in December to today in June (half a year)- are less than `400,000 Covid deaths.

Is there cause to panic? Of the 8 billion people in the planet Earth,  ONLY about 6.7 million have been infected in 6 months- less than half a million deaths and a much bigger percentage recovered.

Even if one contracts the disease for some reason, 81% of the cases are reportedly mild, 14% are moderate and only 5% are critical. This means that if one gets the virus, chances are likely one will recover from it.

SARS has a fatality rate of 10% while Covid is only about 6% (less than one person in every 100 will die)- how can this be worse than SARs?

So- what are we saying- throw caution to the wind- run to the streets, embrace everyone in sight and go to the cockpits as a herd? Not at all. Masks, social distancing and hygienic living are still a must now- until the vaccine is in place.

But we are against policies that tie people to unnecessary inactivity and fear of investing in themselves and in the future of the economy. That is the worse tragedy because in our heart of hearts, one day that vaccine will appear.

Let us say something about economics. Even if the good Finance Secretary Carlos Dominguez says our debt to GDP ratio was brought from 70% to 40% and therefore we can still borrow heavily to stem the economy vs. Covid and provide dole-outs- the government cannot bail out the entire economy, already suffering a negative GDP growth rate in the First Quarter.

The government can go on a borrowing spree and save the economy but that won’t last forever. Remember that the government can only spend what it has –  from taxes, income from government corporations, sales of assets and borrowings. A good fiscal ratio is to have taxes as one’s main source of revenue spending.

But- with our comatose economy, where will the government get its taxes – from VAT, income, capital gains, sin taxes? A government cannot borrow forever- because as at a certain crossroads, there will be no more lenders.

This Editorial is not meant to denigrate the efforts of the government to preserve the health of the province. It just wants to offer one perspective if perchance – some balance in outlook is achieved. That should be par for the course.