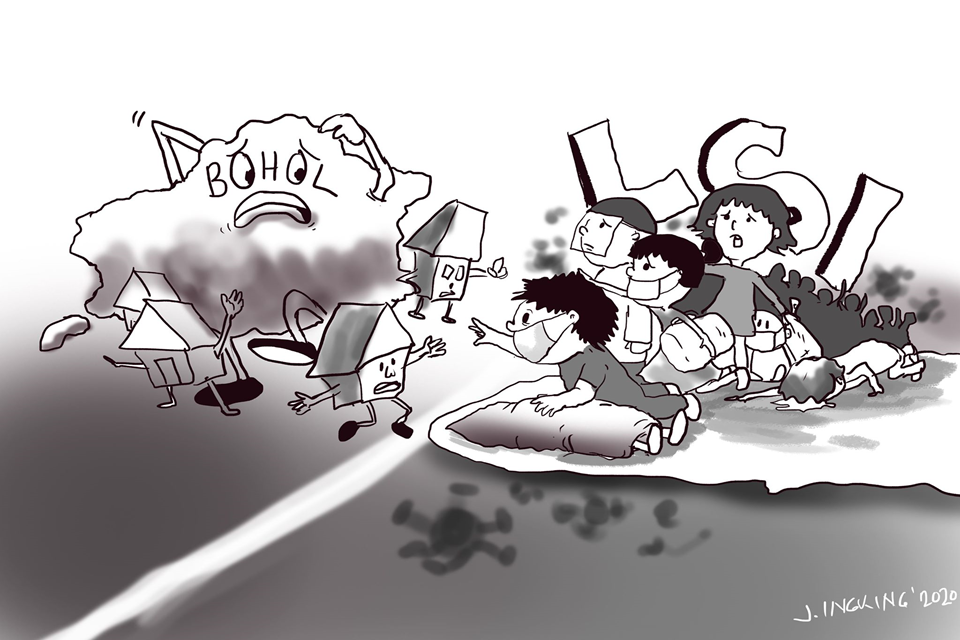 THE PROBLEM OF THE LOCALLY STRANDED INDIVIDUALS (LSIs) is a painful, heart-rending one. They normally do not have work in their stranded locale – making them a burden both to the host family and the community itself. Though not being told so directly, they are unwanted there.

The case in point was Michele Silvestro, an LSI, who after toiling under heat and rain, scant food and tremendous stress along the cruel Manila streets- died after two days.

We could be wrong but Michelle’s case probably opened the eyes of the national government that LSIs should be shipped to their origins pronto.

They deserve to be home where a job probably awaits them- or in the least, a family who likely “misses them like crazy”, as the song goes.

The problem is the number of Boholanos inflicted with the Coronavirus continues to increase within the new active cases from among the 6,018 locally stranded individuals (LSI).

They kept on arriving during the past weeks.  The provincial government is asking the IATF to relax in the sending of LSIs, meaning suspend it for a while since quarantine facilities in some towns are already full.  There’s no place to accommodate other arriving LSIs. apparently (?).

Boholanos are rightfully wondering why the IATF listened to the plea of Region 8 Eastern Visayas to temporarily stop the deployment of LSIs when Bohol also sent the same request as what Region 8 did. Was it because Ormoc  City Mayor Richard Gomez went on national media to express his exasperation on the LSI arrivals? Or because Richard is Richard Gomez?

Let’s get this straight-Bohol is not ejecting LSIs  Only the heartless would do that. Perhaps what is lacking is proper coordination.

Meaning (1) stop sending while quarantine facilities are full (2) No walk-in arrivals wherein mayors will just receive phone calls from the port managers that they have to send their vehicles to pick up LSIs who arrive at the pier without being coordinated with their focal persons.

One other point is that once they are here-Bohol is categorically not in favor of “home quarantine” since this places the entire family under one roof in great danger instead of being isolated at the LGU monitored quarantine facilities.

The move of the Bohol mayors likely followed in response to a two-day radio survey conducted by dyRD’s “Inyong Alagad” and “Tagbilaran-By-Nite” showing 92% of the respondents are against allowing LSIs to go straight to their homes for the 14-day quarantine. Gov. Art Yap did his role to sound off the mayors of the resounding public clamor.

We heard that the IATF is still formulating new guidelines on the return of LSIs. We hope it won’t take forever as the virus could spread wildly through the LSIs who are coming home without any tests (rapid or PCR).

Let it be known that it is the national government to be highly blamed for this virus carried by the LSIs after they changed policy, Originally, all LSIs were required to undergo PCR testing before they were allowed to come home. Then, the PCR testing was reduced to a rapid test.

And later on, the IATF ruled that not even a rapid test will be required from them before coming home. This is the biggest risk the provinces are taking – receiving thousands of ISIs without tests.

What may perhaps be suggested is that the IATF maintains a daily updated recording of provincial quarantine status whether the province wants a temporary halt in the sending off of LSIs.  It might be a simple “Full” or  “Vacant” status to be indicated by each province daily so there can be a daily advisory on whether to allow or top stop sending LSIs.

But in all honesty, it looks like a vicious cycle of a problem, With the LGUs of origin, already their hands full with local pandemic issues, they also do not have the capability or capacity (no, not the heart) to keep the LSIs in their locale- without risking another Michelle which can become  a “blood on their hands.” Quo Vadis, LSIs?

IS THERE NO OTHER ALTERNATIVE?

WE ARE NO BUDGET EXPERTS, but we exhort our able people in the Executive and Legislative branches to look -see where within the current budgeted Funds- there could be a legal way to increase the number of isolation or quarantine centers.

One is the Local Disaster Risk Management Fund (LDRRMF) which aside from procuring PPEs, thermal scanners, etc can “establish central isolation centers”. What about the Assistance to Individuals in Crisis Situation (singularly)  from the Office of the Governor or in tandem with the DSWD Budget for Individuals in Crisis or Distress?

Besides, under the DBM (Department of Budget Management) new rules, governments can now align, re-align, redirect budgeted, or “savings” to what are deemed necessary to address the critical pandemic under the Bayanihan Act of the President.

For the Bayanihan Fund for the Province (P94M) total budget, one specific allocation (No 6)  (totals P3-Million) directs the ten devolved hospitals to fund among others, the construction, repair or lease for additional space for Covid-related patients or those under observation/investigation. The province has a total of P94-M approved Bayanihan Fund while the city has P 40-M.

Finally, there is the total of P404-M allotted to the 47 towns in the province under the Bayanihan Fund for cities and municipalities wherein Section 3.58 allows them to ” expense for the construction, repair, lease, rental for additional spaces or buildings to accommodate Covi19 patients and those under investigation or observation.”

Do we still have some leg room to expand the quarantine centers under these funded programs if we looked hard enough?

Residents can ask from their public officials whether this can still be done. For a complete list of towns and their individual Bayanihan Fund allocation, this can be found elsewhere in the inside pages of this Bohol Chronicle issue.

The amounts are derived from one month of the IRA  (Internal Revenue) Allocation of each town and city, per the DBM Memorandum.