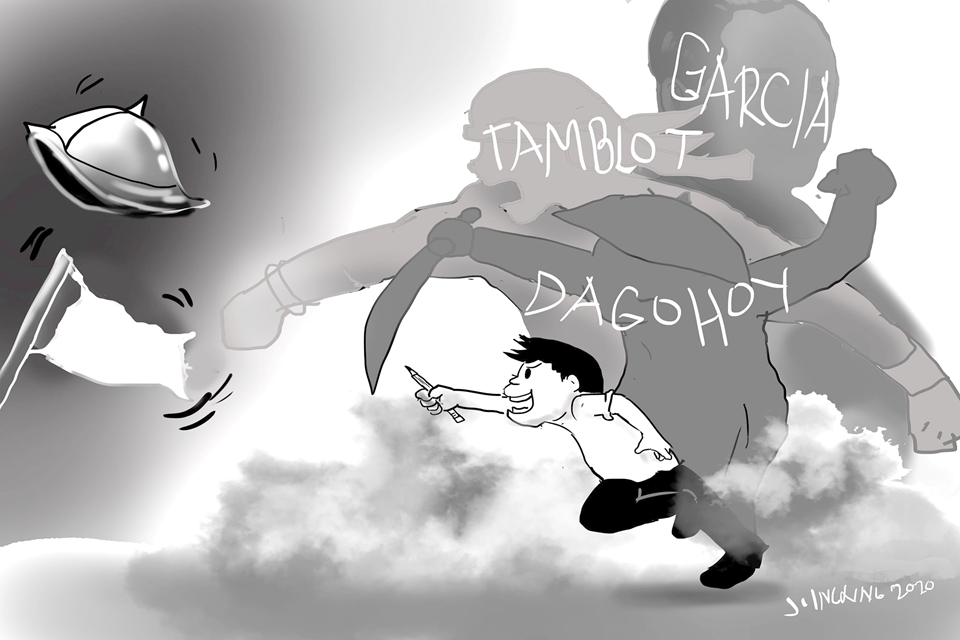 “Courage is knowing what not to fear”

“The price good men pay for indifference to public affairs

AS WE CELEBRATE THIS MONTH, Bohol’s 166th Founding Day, let us not forget the bravery of Boholanos’ in its checkered history littered with blood and patriotism.

Search the Bohol flag and find two bolos there to the left and right- symbolic of the valiant struggles of two Boholano rebels against despotic Spanish rule- Francisco Dagohoy who led the country’s longest revolt (85 years) and Tamblot for two years.

One can surmise that the worn-out joke about the existence of the “Republic of Bohol” was perhaps due to the 85 years of Dagohoy’s pro-independence revolt when most Boholanos- except some coastal towns controlled by the Spaniards- refused to pay taxes, grant free labor and in general recognized their own flag of allegiance to the Philippines.

In fact, 22 Spanish governors-general tried and failed to quell the revolt of Dagohoy and he died from natural causes-not from the bullets of the Spaniards and their collaborators. It is a pity that the late Maryo de los Reyes did not live to see his long-time dream to create an epic film of “Dagohoy” that’s been in the works for years- to retell to the world the courage and patriotism of the Boholano native.

Also significant in the annals of Philippine history was the two-year armed struggle of a local Babaylan for religious and political freedom.  The Spanish kingdom in Cebu had to be called in to put an end to the fiery rebellion of Tamblot.

When the Japanese occupied Bohol in 1942, the then-senator Carlos P. Garcia (who became the 4th president of the Philippine Republic) was a resistance leader here whose exploits infuriated the Japs no end and ordered that his hometown Talibon be razed to the ground.

Among the prominent guerilla leaders also was Esteban Bernido who headed the brigade resistance here (later became Bohol Governor) and a great resistance leader under the pseudo name of Franciso Salazar.

In Malacanang Palace, Garcia had bold policies on economic and political nationalism with his “Filipino First Policy” that, of course, created for him, unwanted enemies. Caloy, Bohol’s Most Illustrious Son, is the only person to both be the president of the republic and elected by his peers as the president of the 1971 Constitutional Convention winning over his arch-rival Diosdado Macapagal.

Garcia stood for nationalist positions in the midst of the presence of American bases in the nation and control of the Chinese of our retail trade.

Over the years, Boholanos must have assimilated these heroes’ rarefied courage and resiliency as they fought invisible enemies in the form of natural calamities like earthquakes, typhoons and now the global Covid-19 epidemic. Given up for dead, Bohol came back from the grave on two occasions and lived to bring its economy to new heights after such a devastating ordeal.

Today, Sandugo, a 31- year old celebration and movement of Boholano solidarity (since 1989) refuses to die despite the global malady. The move to dispel the negative mood engendered by an invisible virus that respects no borders is a joint project for a “Virtual Sandugo Celebration” that will convey the same celebratory mood and showcase the Boholano talent in music, dance, opera and even poetry in a series called DASIG

The move to put up this brave front was undertaken by the provincial government in coordination with the (BACH) Bohol Arts and Cultural Heritage Council and (CCAD) Center for Cultural and Arts Development.

One project BOKAG will display a special story about some select towns that will make every Boholano inspired.

In all of these natural and man-made challenges, Boholanos seemed to have dug deep into the wellspring of bravery and resiliency embodied in the iconic teachings of one of the world’s greatest philosophers Plato, a student of Socrates and teacher of Aristotle (see above).

Nothing perhaps captures the spirit of Boholanos in fighting against all odds than the last passionate sentence of the Philippine national anthem “Lupang Hinirang”: “Aming ligaya ay pag may mang-aapi- ang mamatay ng dahil sayo.”

May we keep these words at heart as we celebrate Bohol Day this month.

THE CONTAGIOUS COVID-19 VIRUS IS HERE-in its most dangerous form.

It was what health authorities call a “community transmission” type.

The three recent fatalities had no history of travel outside Bohol. Although they died of other ailments as the immediate cause of death, they were later found by PCR Tests as positive of Covid 19

The two local residents (two from Calape and one from Danao) were not Overseas Contract Workers OFW or Locally Stranded Individuals. So, where did they acquire the virus?.

We need a Sherlock Holmes equivalent to instigate the tedious contact tracing -the likes of Baguio City Mayor Benjamin Magalong who has been asked by seriously-plagued Cebu City to assess the city’s science of its methodology in contact tracing.

While this contact tracing will never be perfected, Boholanos should be extra careful in their actuation as the situation of being under MGCQ gives everyone some leeway to move freely -making everyone, therefore, more vulnerable to be infected by the unseen virus.

It is a given that from Day One we lacked the testing kits and laboratories to meet the pandemic head-on. We even probably developed a false sense of confidence – in the beginning-that the province was largely virus-free.

But even with more testing capability, only the LSIs and those exhibiting obvious symptoms of the disease will probably be given the tests. With the “community transmitted” status of the virus, every walking man we meet, thereby, is now a suspected carrier.

We can do mass testing but to what extent?

Both should be on stream by August 1 (hopefully the latest date) as even the coordination of the trained operators of the machines will have to be perfected to maximize the use of the high technology. The Capitol mobile lab will be installed at the BMCI compound in Dao of this city.

This lends us some comfort as the results of the PCR tests can then be available within 24 hours.

But let us brace ourselves so that we will not be shocked in the incoming days as we perfect our testing capabilities.

Bohol will follow exactly the same pattern as those in the NCR. With more relaxed economic activities and freedom of movement combined with more and faster testing facilities, there was experienced a rapid rise in confirmed cases.

As certain as night following day- this is what will happen here.

While waiting for all these tests and labs, we always had vouched for more quarantine centers being established. We know for a fact that globally only a small percentage of those affected will be considered as of “serious” magnitude and thereby needing to be hospitalized.

Thus, more quarantine centers and rooms outside of the hospitals are necessary- (for the majority that are less seriously infected) and we can start building them now (slowly but surely) with the limited resources that the government, the LGUS and even private sector sponsors can join hands together for and not wait when the quarantine rooms become an absolute necessity. That will be a trifle too late.

In the meantime, as a religious people and today being a Sunday- let us pray unceasingly to our God of Healing and Mercy and trust ” that He will not allow man to suffer anything that man cannot bear.” Shalom!