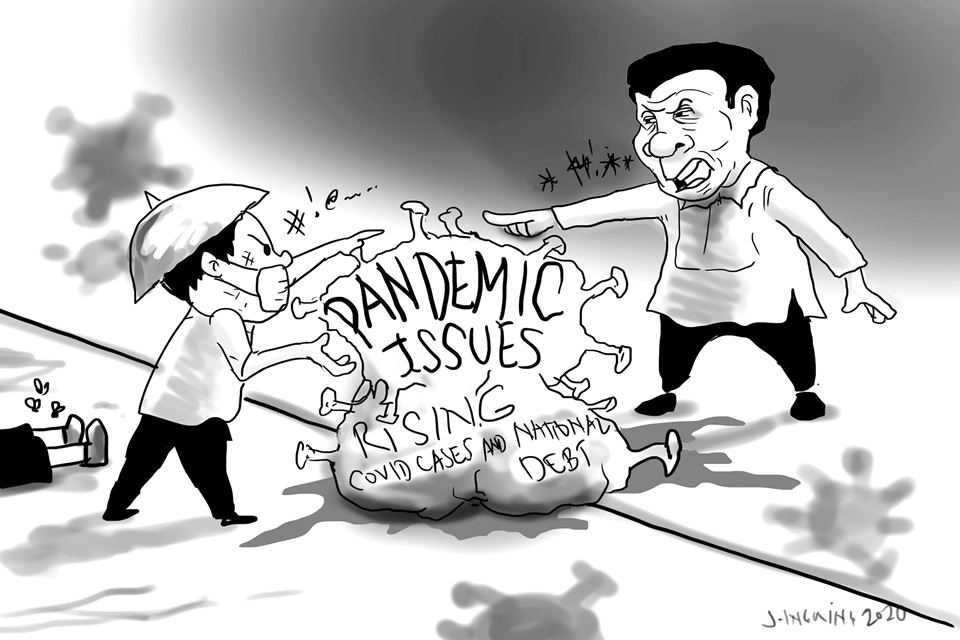 THE  BOHOLANOS WHO GAVE A BIG DUTERTE WIN in 2016- will certainly listen to the President’s State of the Nation address tomorrow -especially amidst this unprecedented pandemic problem that is tearing the country apart.

While the 1.2. Million Boholanos are abundantly aware that much of the day-to-day firefighting against the Covid-19 is shouldered by the LGUs, there are issues that gnaw at the innards of Boholanos that grew out of questionable decisions at the national level.

First, would the flip-flopping policy on the return of the so-called LSIs (Locally Stranded Individuals) – from testing at the place of origin via, PCR, then Rapid Testing and finally- “catch the ball -receiving LGUs- do the testing yourselves” and do the necessary quarantine if needed.

It was a case of the national government- dropping a proverbial Hot Potato as it turned out that most of the Covid positive cases here have been LSIs.

Second, faced with thousands losing their jobs and livelihood, the Department of Labor and Employment runs short of funds leaving thousands to fend for themselves in the merciless jungle of survival.

The Third was the dumb, unresearched decision of the IATF suddenly advising the public to put sidecars beside their motorcycles after back riding was banned- ignorant of the fact that this would cost Juan de la Cruz some P30,000. The public reacted sharply due to the stupidity and insensitivity of this all.

On the local scene, the weak implementation of existing health protocols especially in the municipalities and barangays is common knowledge. Let’s start with the wearing of face masks which the WHO (World Health Organization) capitulates -reduces the risk of infection by 65%.

During a radio survey conducted by DYRD’s “Inyong Alagad” and “Tagbilaran-By Nite” radio programs,  it was voted down that the imposition of the P3 to P5 thousand penalty and imprisonment of up to six months- as ignorant of the fact that many people are penniless and impractical because many of our jails are over-congested.

Instead, the public is clamoring for a strict arrest of violators to be meted punishment like rendering community service like a whole-day cleaning of public places and a “shame campaign” by posting photos of violators in the social media.

Other common violations are curfew and drinking amid a liquor semi-ban. There are suggestions that the violators’ homes be locked down for at least three days- putting the entire household into a state of inconvenience as their just recompense.

Gov. Art Yap challenged town mayors and barangay captains to be part of this solution to be strict in apprehending violators. It was known that the chief provincial executive  (himself) flagged down on the road a foreign national on a motorcycle- for not wearing both face mask and helmet. He was politely asked to comply.

The same radio survey registered a suggestion that the government allocates funds for the barangay tanods who will be tapped in the implementation of the penalties for health protocol violators since these tanods are just receiving a measly monthly stipend of P1,000 only.

In the meantime, by early August two modern testing laboratories (moble of the government) and that of the Celestino Gallares Regional Hospital will be on stream likely leading to the expected rise in Covid-19 positive cases- with the increasing preponderance of testings made.

If reports are true that Cabinet members will be coming for the kick-off of the laboratories, we expect that proper quarantine protocols will be done of the visiting Manila officials. No one should be exempted.

Finally, the unofficial news about the possibility of President Duterte coming for a Bohol visit certainly will put a big load on the local government because of the arrival of a requisite big entourage including the Presidential Security Guard  (PSG) and staff.

To this writing, the Covid-19 remains a big headache for all.

MOST FILIPINOS EXPECT LOCAL TRAVEL BACK IN A YEAR

IT WILL BE A LONG AND WINDING ROAD- for Bohol Tourism as TwEco Inc, Manila-based interdisciplinary consultancy research group focused on Tourism found out in a recent survey that the Filipinos expect tourism travel back within a year.

Interestingly, 63% of these respondents have been to Bohol in the last 5 years and 42% of them wanting to travel to Bohol again this year but were halted by the pandemic.

Some 66% of them were moderate to seriously affected by the loss or decrease of income that influenced their decision to travel. Of course, the biggest scare (83%) was caused by Covid-19 as a public health issue.

Therefore, 55% of them said that they will decrease their frequency to travel Bohol until we find a clear solution to the pandemic even as 61% of them expect tourist travel to come back within a year or so.

They were not too optimistic about seeing the end of Covid-19  very soon although vaccine breakthroughs have been posted across the globe. Seventy-six percent (76%) of them, in fact, believe that a second wave is coming with 44% of that saying this is to happen “very likely”.

Surprisingly, they (47%) rated the government handling of the pandemic as a failure, 32% as neutral and only 19 approved of the way government had handled the problem.

If ever, the respondents added, if they travel again, there will be two major considerations  (a) absence or sparse Covid cases at the point of their travel and (b) strict implementation of Covid protocols not only in the (accommodation, restaurants, tour spots, malls, and travel vehicles) but also as observed by the LGUs and the airlines that will take them to their destinations.

The results above were a result of a nationwide survey done June 19-27, 2020 and perceptions could change in the succeeding surveys.

For the different parties- the results should serve as lighthouses to guide policies and decisions rather than as points to defensively argue against.