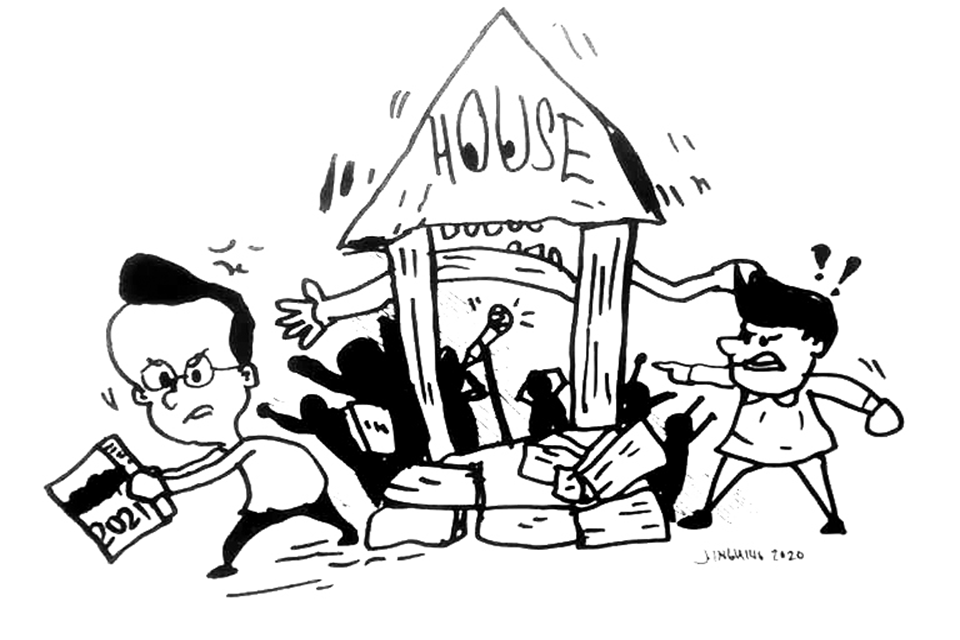 TRY AS THEY MIGHT. there is little chance that the “Duterte Coalition” in the Lower House will remain impregnable. Unlike the Senate which postures with a bit of independence from the Palace, no Speaker assumes office without the blessings of the President.

It was perhaps a combination of hubris and unbridled presidential ambition ( in 2022) that doomed former Speaker Peter Cayetano. He betrayed the “brokered deal” for time-sharing between Peter and Lord Velasco and worse,  de facto hostage the 2021 National Budget that made the president look like a lame duck Chief Executive.

The peeved president ordered a House Special Session to pass the 2021 P4.5-Trillion “Covid 19” Budget from October 13-17. Prior to that date, a house coup unseated Cayetano through a 186 majority vote in Celebrity Plaza on October 12 Monday.  The next day, the House “officially” voted Peter out – he had no choice but to resign “irrevocably”.

It did not save Cayetano any face- for his ouster was a fait accompli even before he resigned.

The new “Lord of the House” was hoisted on the shoulders of PDP-Laban (61 members), NPC headed by SMB billionaire chair Ramon Ang (34 members), Partly List Coalition Foundation (PLCF) (about 30 members), and the “swing vote” from the Lakas-CMB group ( 19 votes identified with the Romualdez and Arroyo groups)plus a sprinkling from blocs identified with Northern Luzon. NCR. Visayas, Mindanao and Bangsamoro blocs. Even the LP (minority) supported Velasco.

Cayetano was left with only the NP (40 members) and the NUP (National Unity Party) (47 members.

As promised the House Budget was approved late Friday night -but the fight is not over. By Monday – amendments can be directed to a Velasco-appointed- committee who is given 2 days to finalize the House version.

Expected to get severe cuts will be the “Taguig” budget shared by Peter, his wife Rep Lani and his brother-Mayor Lino of the city with P8-Billion and Cayetano’s loquacious ally Rep ElRay Villafuerte’s Camarines Sur budget of P 11.8–B including the erection of a Capitol building and a sports complex. Many like Cebu and Negros have complained about the “inequality” in the distribution of the House largesse particularly those involving the DPWH Budget.

One need not be a political scientist to see why almost immediately, president Duterte tersely accused DPWH as reeking with corruption and the P6.8 Billion SEAGames budget and the Clark city project under Peter Cayetano has been flagged by the COA.

There is a great chance that the “Cayetano-House budget” will be further decimated during the Bicameral conference committee meeting after the Senate makes its review of the House Budget.

But there are enough sound-minded congressmen in the “appeals committee” of Velasco that will ensure lesser inequality and favoritism in the House budget. To name a few Congresspersons: Salceda, Duavit, Buhain, Leachon, Herrera, Quimbo and Lagman.

What are the implications for Bohol’s three solons after the House reshuffle? To have risen largely in his political stock is  2nd District Rep. Aris Aumentado, a loyal mainstay of the NPC and 1st District Rep. Edgar Chatto (LP). Aumentado should help lobby for his friend-ally in the 3rd district under Rep.  Alexi Tutor who is a member of the NP – all for the good of Bohol.

Leaked information states the three districts should at least have P4-Billion in identified projects for the 2021 Budget.

Definitely, after the political earthquake, the House is now figuratively inundated with floodwaters. Our Bohol solons will hopefully have their heads above water.For comments: email to dejarescobingo@yahoo.com or bohol-rd@mozcom.com