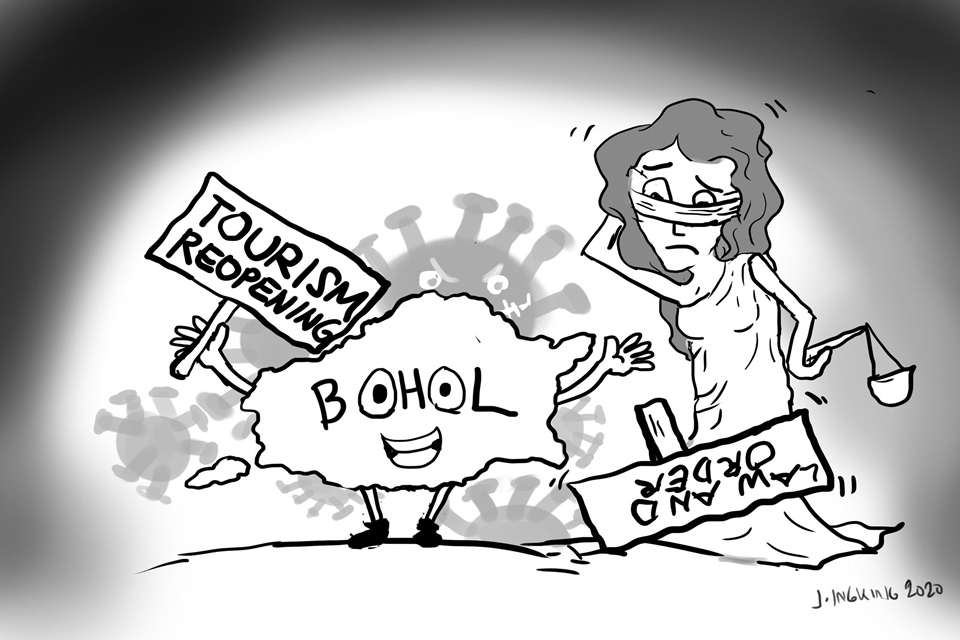 THERE MUST BE “SOMETHING SPECIAL about Panglao Mayor Nila Montero for the arms of the Law to take over a month to nail her down for three obvious protocol violations that even slightly-educated kids can discern.

One thing sure this kid’s glove treatment of an erring high public official did not serve the ends of proving that there is no compartmentalized justice in this country- one for the poor and another for the rich and famous.

The Court of Public Opinion had long rendered its verdict based on documented facts from witnesses and postings in social media that someone felt privileged to ignore the law on pandemic travel – and for non-life-and-death reasons as the delivery of a speedboat and relocation of island settlers.

The dictum of “justice delayed is justice denied” was side-swept by an “over-extended due process” extended by Gov. Art Yap who threw the responsibility to investigate the judicial matter to the military (as BIATF Security) who gave three unacceptable reports. The third one was so shot with holes that it appeared more tailored to exonerate the mayor than to give the public a taste of the letter and the spirit of the law.

Finally, the Governor placed the obligation on the Capitol Lawyers who were there, after all at the beck and call of the Chief Executive -so why go through these weeks of legal limbo, giving the impression that no one was really in charge?

So at last, the Provincial Legal Office made its pronouncement that indeed Panglao Mayor Nila Montero had violated basic health protocols, (1) no travel authority from the Bohol Inter Agency task Force (BIATF) to travel to Cebu and back as her travel authority application was only submitted and received by the office of the Municipal Local Government Officer of Panglao;

(2) that she violated quarantine protocol as she was seen by many credible officials to be out  attending social functions when she should have been in quarantine at least five days after her arrival from Cebu, presuming that she got a negative PCR swab test results on the 6th day; and (3) that she did not have the medical certificate to prove that she was clear of the virus after visiting Cebu.

These three unquestionably unassailable facts will be taken as the basis for the filing of a complaint against the mayor. So what was this very public “Ali Shuffle” all about?

Was the governor afraid of the mayor’s (vote-rich following) or his way to pressure the mayor to jump into his political camp – is something only the governor could answer? If then so- he was acting like a politician and not a statesman.

But as a lawyer, he found a solid ground to explain his silence before the BIATF could issue its stand on the issue. While some found that perfectly legal, many still question its moral justification given the publicly-known pieces of evidence.

Now that the probe involving the mayor of Panglao is seen to be nearing its finality, the public expects the formal filing of the complaint against Montero will be soon – otherwise there would be more injury to insult the public will have to face.

If ever found guilty, the penalty would just be ” for a song ” for such a publicly – acknowledged wealthy public servant – a P5,000 penalty and/or an imprisonment of one year. Although the legal penalty is a “and/or” proposition, we doubt it if they want a mayor of such caliber to spend 365  days in jail. Be that as it may.

Once the mayor gets penalized,  the public hopefully regains some iota of respect for the Capitol in following the existing health protocols. In time, they can hope people will forget the “Ali Shuffle”?

This early filing of the complaint against the Panglao mayor could perhaps form part of the signal for Bohol tourism that it is indeed ready for its reopening. In that Capitol knows the law and can make it stick if it wants to.

The Capitol date set for the reopening of tourism will be two weeks from today.   Gov. Yap trumpeted to the whole world that this scenic island paradise will reopen its doors for tourists on Nov. 15, two Sundays from today.

Presidential Spokesman Harry Roque blew into town last Wednesday to see to it that preparations for the reopening  would meet the minimum health protocol.  The nationwide televised press conference with Sec. Roque  declared Bohol as the next destination to officially open for tourists.

Hennan Resort top  honcho Henry Cheusuey who hosted the presscon with the presidential spokesman was frank- and practical enough- to say that this Tourism Bubble is doomed to fail if tourists will be required still to undergo at least five days of quarantine upon arrival.  We are of the same opinion with the top hotelier that there will be no tourists coming if this quarantine requirement remains enforced.

The impending Mayor Montero case resolution is vital since she sits as the top official of Bohol’s gateway to Bohol since Panglao is where the Bohol Panglao International Airport is situated.

We can not afford to trumpet stringent health protocols for visitors and then have a  top executive of Panglao as a health protocol violator herself.- flaunting disrespect for the law that applies for all- and then gets away with it. Enough already of this masquerade.

HALLOWEEN – THEN AND NOW

HALLOWEEN IS A PAGAN RITUAL,  observed for centuries in many parts of the globe. It is usually celebrated on October 31, on the eve of All Saints Day.

It is this time of the year that Juan and Maria are encouraged with “to visit their dead or the dead will visit you” threat. It is this time when it is erroneously but popularly taught that the dead are allowed to walk among the living. For whatever reason, we do not know- for there are 365 days in a year.

It is a celebration characterized by men, women and children dressed in ghoulish-dead or eerie-devilish costumes, the scarier, the better the chance of winning “Tonight’s Ugliest”- a reverse beauty contest.

In Hollywood, the latest “winners” in this weird encounters of the worst kinds include the singer Adele, dressed as a sexy pirate whose escort is Satan himself with two horns and clad in a checkered garish suit and another singer Lady Gaga, clothed (or unclothed) in a sexy fish-net garb topped by an evil one horn like a unicorn. See, what we mean?

On the other hand, it is the ultimate insult for Pedro to be told that day to remove his mask- when he is not wearing one. (Laughter)

Many cult practitioners, likewise, also use these days to play the macabre “Spirit of the Glass” table game – to communicate with the dead and give them questions to answer. “Who shot Liberty Valance?” (laughter).

A word of caution.

The Bible may not mention the word “Halloween” but clearly modern customs on that day are based on false beliefs about the dead, invisible spirit or demons. “While others view Halloween as harmless fun, the Bible indicates that the practices associated with it are not.”

In the Jerusalem Version (Bible)  Deuteronomy 18:10-12, we are warned:” There must never be among you who… consults ghosts, spirits, or calls up the dead.”

In the New International Version (Bible) Corinthians 10:20-21: ” I do not want you to be participants with the demons.  You cannot drink of the cup of the Lord and the cup of the demons too.”

How did these paganistic, animistic rituals of Halloween start, anyway?

It started with the Roman Festival where the Romans hold a big feast every first day of November in honor of the goddess of fruit trees named Pomona. Meantime, in England, the old priests of ancient Britain, known as droids,  hold an autumn festival during which ghosts and the dead were believed to come back and roam around the earth to visit their friends or play pranks on the other living.

While waiting for their coming, people used to build big bonfires during the night to scare away the evil spirits and witches.

Later, the Christians observed another feast during the same night to take the place of the pagan feast. Much later, the two feasts were merged into one grand universal celebration on October 31 known as Halloween.

Bohol, after all, is a very Catholic province with centuries-old churches in towns and each venerating their own patron saint. So, we have no dearth of beloved saints and the country has even produced two of our own saints: Lorenzo Ruiz (1600-1637) and Pedro Calungsod (1654-1672), both martyred one in Nagasaki, Japan, the other in Tumon, Guan.

It is instructive that our two Filipino saints are laymen-missionaries- which is prophetic for the growing role of the laity in the ever-challenging task of evangelization in a growing and woefully increasingly materialistic world.

Finally, it is apropos for us that when we visit our dearly beloved departed ones (in the cemetery) that we do not just look at the condition of their wellbeing in the place of the Great Beyond. It is also germane to consider the immortality of our own very souls and the finiteness of our bodies.

Going there, for a moment, feeling close to them once more should make us come face to face to the reality that someday we also will join them.

We begin to ask these questions.

This mad rush, this hectic pace, which has become our way of life, where will this lead us to?

This insatiable lust for power, this inordinate love of oneself, this greed for excessive wealth, what are all these really for?

Stand silent and alone before an ornate tomb or a lowly grave. Think. The answer is there.