The legend of Ivan the Terrible
Advertisement 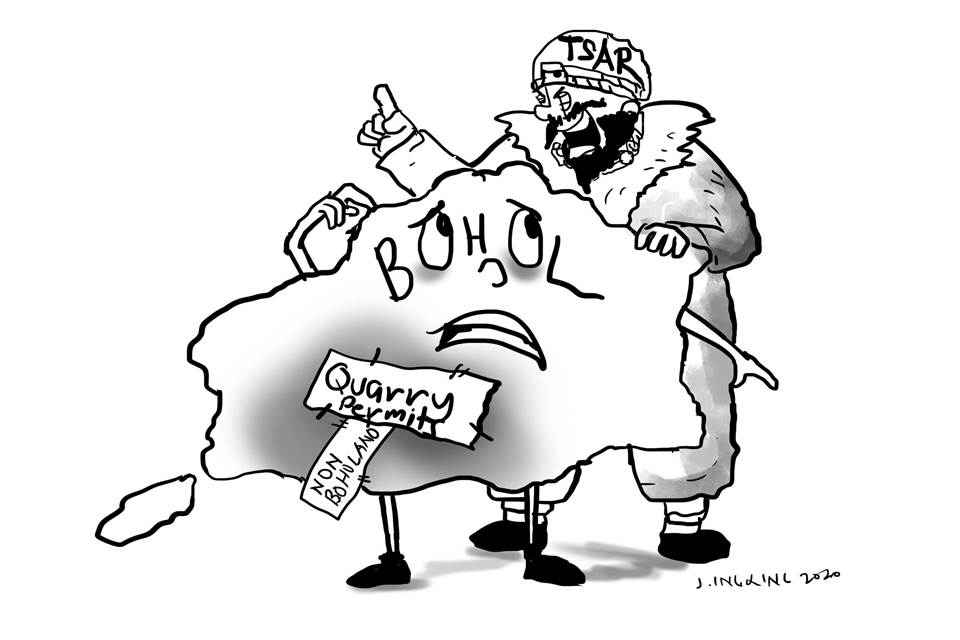 IVAN IV, RUSSIA’S FIRST TSAR, led Russia under the reign of terror and waged war against neighbors Sweden and Poland. He was both a terror and a legend.

Bohol’s “Ivan” on the other hand, now a household byword -mystifies. He is the imported “broker” who clears all quarry permits and delivery receipts in Bohol even if he appears to be non-Boholano. He has become a legend due to his notoriety.

Ivan’s name is on the lips of hundreds of thousands of Boholanos- because he is a criminal with a name but without a surname as of yet to the public. Ivan is identified over the airlines as the guy who demands P50 per cubic meter collection from all Bohol quarry operators.

When his name was first dragged- he disappeared like a mist-then apparently, reappeared recently- trying to once again make a mockery of the Anti Graft and Corrupt Practices Act. Capitol seems to dismiss with a sneer this character  “Ivan” as a myth who they have not reportedly met – this legend in his own mind.

But the public is shocked not just because of the enormity of the quarry “tongpats” (patong, to be crude about it) but the fact that he reportedly continues to thrive today like a phantom most people haven’t seen or cannot identify if seen.

Most people believe Ivan cannot operate without some blessings from some powers-that-be somewhere and are shocked the cabal has the nerve to go against the recent anti-graft rantings of a peeved president of the Philippines. Well-connected as to be tolerated? Well, he is not Ivan the Terrible for nothing.

After almost a month of Ivanspeak in the community, not a whimper was heard from the Sangguniang Panlalwigan until last Wednesday when BM Ricky Masamayor, let’s call him – “The Lone Ranger,” called the top-rated “Inyong Alagad” program to assure Boholanos he will call for a probe of the matter in a privileged speech that has been a long time coming.

Fortunately, the “Lone Ranger” has found two other “Tontos” on his side- one BM Victor Balite who will likewise initiate a probe on the tong quarry and another BM Lucille Lagunay who will pass a resolution seeing a more stringent policy to ensure that this alleged tong collection can be nipped in the bud and dismantled.

When one sees an anomaly as huge and as brazen as this -one can be sure this is just a tip of an iceberg that can sink even the German warship- the Bismark. For one moment, people thought the SP has become One Big Committee on Silence- now it is not.

People are asking what is so sacred about this certain “Aida”  of the (PTO) Provincial Treasurer’s Office who the general public knows has been fingered by the permittees as the town crier who tells them to pay their due respect to Ivan The Terrible for things quarry. And even gave them his phone number. Ivan and Aida, in that sense, cannot be an estranged couple, to say the least.

What about Provincial Administrator Kat Pioquinto, who at the height of the “fire” said a sad remark that “these are serious allegations” to be dug deep into? She emphasized Ivan is not an employee of the Capitol. But not even a grade-schooler expected her to say he was.

Now Provincial Administrator Pioquinto might reportedly back on the saddle after taking a leave.

The thing is what do”dig deep” and “serious allegations” mean after she said so?