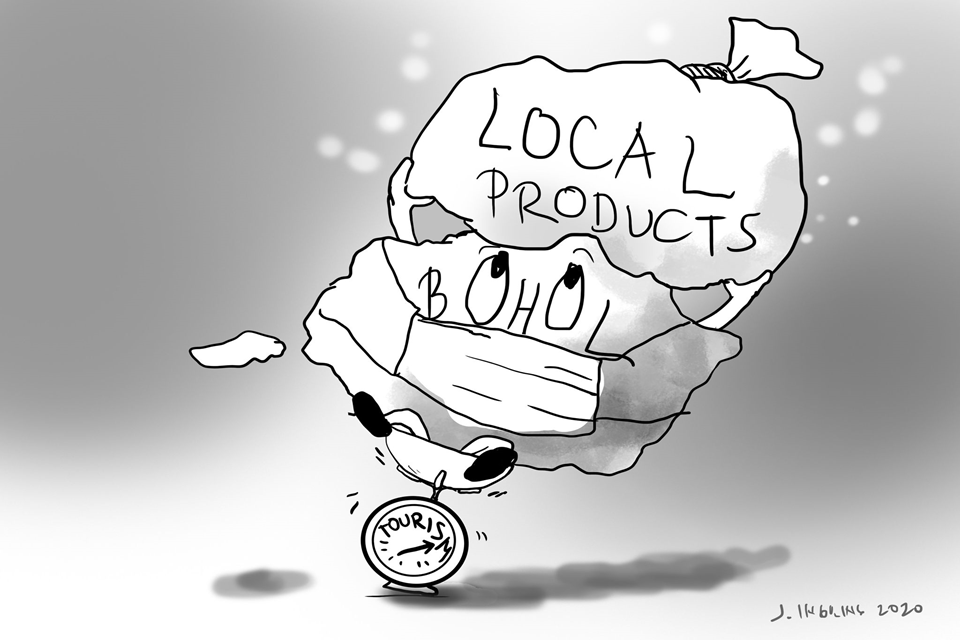 AFTER NINE MONTHS AMID  a debilitating pandemic, Boholanos have already discounted what to expect this Yuletide season.

Mindset-wise, Boholanos are  identical with many of the Filipinos who are almost deathly   afraid to move around while the virus is still hanging around like a pesky carrier fly.

Thus, despite the “opening” of Bohol to leisure tourism, there are nil tourists coming .  On the first day was the pitiful sight of the provincial governor and the  national TV anchor noting  a glorious, grand number of “6” tourists  daring to enter Bohol on Day One. It was not exactly a  Day of Triumph if you ask us.

As of yesterday, the majority of the resorts in Panglao reported that there is almost none to speak of.   And the resort managers chorused in saying that the requirement for PCR testing at the point of origin as well as test for those stating beyond 5 days is the prime factor driving away tourists from coming.

Because  why would even the high flyers of Manila even think of considering Bohol? There is disarmingly chilly Baguio City which is now three hours land ride away? And reaching Tagaytay City is like  finishing one album or CD away in your car and you are there- viewing Taal volcano and lake  and their splendor and savoring the fancy and less pricey restaurants.

Over the last few days, many salaried workers and families in Manila trooped to the beaches of Batangas, Zambales and Bataan, well, ok, the beaches are not by any stretch of the imagination  of the magnificent scale of Panglao or Anda but what the heck.  Many have no swab checks (perhaps antigens and medical certificate from place of origins) and there are no other aggravations – and no expensive airplane flights to book.

Bohol is competing itself to death for local tourists.

Of course, there  is still that absence of a vaccine which is another factor.  But all provinces suffer that fearful feeling of suspense and uncertaintly due to its absence- so , it is par for the course.

But would the vaccine be a plus for Bohol since it might take some effort to reach the number of vaccinated  numbers here as to create a “herd immunity” – the magic number needed to stop the virus dead on its tracks. And why is that so?

Because- surprisingly or  perhaps expectedly, a radio survey conducted by DYRD’s “Inyong Alagad” program showed  that 76% of the Boholanos will not take the risk of having the vaccine pointing to the short period of time the vaccine was being scientifically studied. (Of course , someone should educate us that all vaccines  being considered went  uniformly through months of Phase I to III levels of testing).

We will be frank- let us stop mistaking our ignorance for science. Read, research more.

So, given that- the downside will continue for Bohol and the economic recovery will be lukewarm since this is a tourists -driven province. We understand it is hard to balance decisions involving economics and health safety but sometimes we can do get to be more Popish than the pope, pardon the expression.

So the excesive fear factor (which is  sometimes also a function of how  local government make the peole unduly threatened  most of the way) and the agressively- strict health protocol are the prime reasons why the attractiveness of Bohol is akin to muscle-bound legged and flabby armed matronas vying to become Miss Universe.

But, hey, there might be a way out that we have overlooked  to cultivate intensely because we try to be what we are not.

That is the notably good and strong patronage of locals to the tourism industry, We noticed resorts having Boholanos booked especially during weekends and for the coming holiday break.  This should be encouraged further by all sectors so to support the rebirth of tourism here. We still have to see a concerted effort by both government and private sector to sell Bohol to local residents- and not just lip service. We mean down–to-the -gut promos.

Yes, there are individual promos of the resorts, but we are yet to see a serious  collective “industry” effort to entice locals to book at the resorts The Provincial Tourism Council should come up with a unified promo to include participating restaurants and destinations – a coordinated packaged deal of sorts that developes a knockout pitch,so to speak.

The attraction, of course , will be not just be the low rates of the resorts but of the participating allied agencies such as the dining and new tour destination packages.

If the visiting Phitex was given the hefty discounted package, the locals ought to be given bigger discounts so as to feel the movement and support of the local residents.

We should remember that we are 1.3 million warm bodies in Bohol.  With majority of the Boholanos having kin working overseas and key Philippine cities- the budget to enjoy staying in the resorts should not become that forbidding- given especially the “holiday spirit” of being justifiably “on vacation mood” and therefore, people are more psychologically ready to cock and release those leisure pesos.

All what is needed is a concerted effort of the stakeholders- and let everyne know it through traditional and social media and generate a volume and gross margins that can take care of the strangulating financial overhead that firms spend whether there are customers or none..

With the Christmas break starting this week,  we hope an improvement in the movement of people patronizing our local tourism industry.  Boholanos should take note that the level of Covid affected persons in the province is relatively low compared to many other provinces.

Finally, on the aside – we note the unfading religiousity of the Boholanos based on the  huge crowd of parishioners attending the dawn masses and the anticipated evening masses.  This proves that faith has conquered their fear to go to churches despite the crowd inside the churches since the Misa de Gallo started last Wednesday.

Let us help spillover this new-found courage to flow over and rev this dying Bohol economy.

Enough of over-analysis and analysis-paralysis of pseudo technocrats  and bureaucrats and let’s just DO IT.