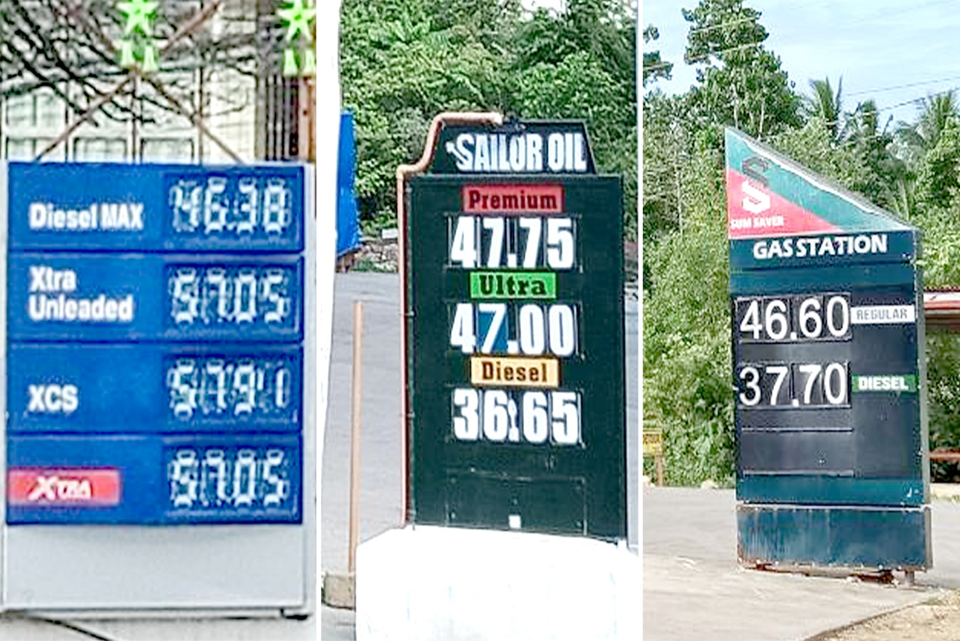 The high fuel prices in the province continue to puzzle the consumers up this date.

The prices in some “white” gasoline stations are cheaper by P9 per liter as compared to the prices in the capital city.

A  check conducted by the Chronicle at various gasoline stations showed the price difference.

In fact, the high fuel prices are more evident at the city-based gasoline stations where there appeared to be a “price cartel” imposed by the gas station owners.

This is evident since the fuel prices even in the next adjoining towns of Dauis and Panglao are already showing the difference of no less than P9 per liter.   The distance of about 10 kms  could not explain why there was such a price difference.

For diesel, city gas stations are selling at P46.38 while Dauis gas stations sell at P36.65 or city pump price higher by P9.30 per liter.

This is true in Ubay town that for years now, gas station operators pegged their pump prices for unleaded between the range of P43.00 to  P45.00 per liter and the diesel at P36.00 to P38 per liter, the lowest in the province.

This consistent high prices of fuel in the city has puzzled motorists on why this is left unattended by local government authorities.

Reports reaching the Chronicle bared that recently, there was an attempt for someone in government to impose “tong” collection among major fuel distributors in the province.

A highly placed source told the Chronicle yesterday that sometime in 2019, their delivery of fuel from Cebu to Bohol was negotiated by a kin of a top government official imposing a P5 per liter cut in the price ceiling.   This prompted a local fuel distributor to stop the gas fuel distribution business.

Motorists are starting to ask that if the P9 per liter difference can make the business still profitable then why can’t government intervene in order to pull down the prices of petroleum products in the entire province. One possible reason is the price liberalization act that allows free market forces to determine the true market level.

Some observers believe that this price war may further be heightened with the mushrooming of newly-built gasoline stations and some are still constructing on highways even in not-so-remote nook of the province.

As long as the sales of new cars and vehicles continue, there will be more gas stations.

A City official once said that car sales from city-based distributors is between 3,000 to 4,000 units a month prior the pandemic.

Car distributors in the city are also growing along with their respective service centers mostly located in the city.

Bohol has two oil depots in Tagbilaran and Bien-Unido town, where some distributors get their supply, except for the so-called ‘white stations’ or ‘independent players’ that secure their demand from other sources in Cebu City.

Competition-driven price war will ultimately be beneficial to the motorists, according to owners of both public and private vehicles.