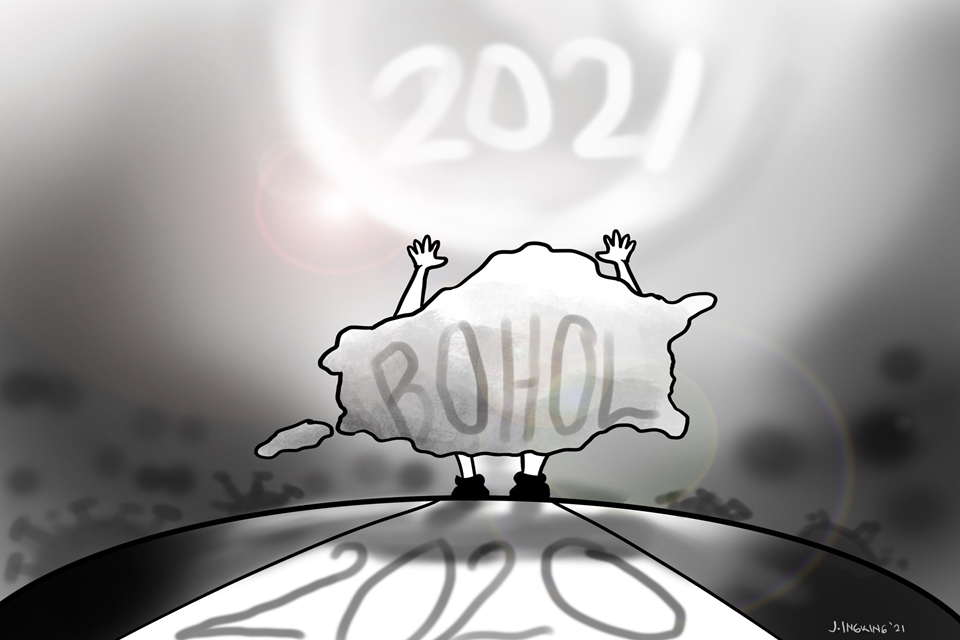 A TRANSFORMED BOHOL from a shattered image in 2020 will certainly emerge. Someone who is in the rock bottom, the pits, has no way to go but up.

Only because, anything below what was 2020 is the moral equivalent of hell.

As the herd immunity against Covid 19 is slowly being achieved as more people in the world gets vaccinated, business will inch- not yet bounce back – to normalcy.

As other sectors in the economy unlock its captive riches- in unsold inventories, in unfinished supplies, in uncollected receivables, in unpaid displaced workers, in unutilized machine capacity in idle cash parked in the banks: demand for tourism and R and R will be restored.

Not before that – no matter how pristine the protocols are and formidable the bubbles.

Confidence must be restored otherwise, the 10,000 additional high and middle-of-the-road rooms scheduled to be opened here (Crown Regency, J Park of Justin Uy) among others will remain mothballed as a beautiful blueprint-never to be used.

Before the giant international tourism awakens, perhaps we may have to go to local tourists first. No stringent protocols, no expensive travel.

The way Cebu has been inspiring in this respect.

A family friend of 10 people locked arms together and swung their way to their hometown in  Bantayan Island in Cebu from the city to support their tourism efforts for three days  up to the New Year. Just to cite an example.

Government and the private sectors must join hands – not pull each other in different directions. The government wrongly advertised as admirable its logo as strictest in health protocols and “Do Not’s” in the archipelago without visiblY feeling partly responsible for the devastation of a P10-Billion economic loss.

Jobless of 200,000 people impacting 3 dependents or 800,000 of the  1.3 billion Boholanos matters even if that is merely a sad statistic ( to ponder upon) unless you are part of the 800,000. Policies here have sunk the poor deeper into the abyss of poverty, some of the middle class across below the poverty line and many big businesses and SMEs into bankruptcies or the financial equivalent of a Chapter 11.

Even if one’s Bayanihans One and Two were P 2-Billion and the new Provincial Budget is P4-Billion- the total of P6-Billion is not equal compared to the P10-Billion losses. You cannot pretend that is just an unfortunate accident or a walk in the park- otherwise you are either a  heartless sadist or a headless moron.

Even if the late American president Ronald Reagan was just a movie star he had the sense to undertand “it is the economy, stupid” when Bill Clinton used it as a campaign one-liner.

Now that Tourism has a severe black eye like Pacquiao getting it from Marquez, leaders talk of a new agriculture revolution, less of tourism.  But these are virtually these same guys who have been around for years- talking about small irrigation systems, high value crops in between rice seasonality  and in between coconut croppings, farm to market roads, freezers in bagsakan centers and “killing the hated Shylock middlemen”. Where are they? Their impact on the common man?

We do not mean this personal, guys, but what have we really to show? What officials could not do it during non pandemic normal times, what are the chances in hell they can sell ice cream there and amuse Satan in severely rough economic atmosphere like now or the rest of 2021?

When the Rice Tarrification Law provided the death knell of 300,000 rice farmers in Bohol and one promised to aid them,what honestly did one do aside from flowery lip service? Why will people believe beautifully book-bound Agri Plans now and not then?

The next item is going to get some people hurt and perhaps offended. But we have to say it.

We are supposed to be heirs of Dagohoy and Tamblot rebels who will not fear to stand against injustice, inefficiency and corruption. But, unfortunately, after years of observation, the average Boholano would rather stay in the cocoon, stay out of trouble than became vigilant civil society servants for a just and decent society.

The “Fear Factor” prevents us from pointing a dirty finger to the crook guilty by direct and circumstantial evidence – to Judas Iscariot and his 30 pieces of dirty silver- the equivalent of three month’s salary at that time- because that is what this crook who hung himself valued his  Master Jesus who loved him like his own brother. We do not want to offend people’s feelings but by default and deafening silence- we are hurting society in the process.

Where is the greater evil our reverend Fathers and your excellencies Bishops?

In a recent DYRD survey, 78% of Boholanos would not want to be the first to be vaccinated especially the allegedly more expensive Chinese vaccines. We do not blame people for their suspicion of the Chinese as it has been proven survey after survey that people generally distrust China. It is a cultural thing after 500 years of Christianity and 50 years of Hollywood.

But to run – tail-between-the-legs-to the last of the vaccine line is both to indict the science of 8 billion bright people (in the planet) that will soon invent flying cars and move people to Mars to live there and a loss of patriotic duty to country and loyalty to global earth who nurtured us.

Sorry to say this, Watson, but often it has been our lethal combination of lack of “otherness” and sense of duty that have made cowards of us all at times.

Medical expert for decades on vaccines Dr Fauci and philanthropist Bill Gates estimate that if 70% or 5.6 billion of the 8 billion earthlings are vaccinated – the herd immunity will be achieved. That means Covid-19 will become past tense.

It could be stretching the argument to falsehood –but would not this same scared people who if and when the Philippines goes into war- will make up all sorts of excuses so as not to be conscripted into the army, the navy, or the air force?

Yet, when the smoke clears, will be the first to claim part of the ruins and the fruits of a defended democracy? Would that make us a proud Citizen Watson?

Perhaps what some of us would need before being inoculated with the anti Covid-19 vaccine is an Anti-Fear sedation injection and and bring back the heart of the fearful Lion in the  land of the Wizard of the Oz? Similar to how Boholanos fear to get contaminated, we need to know how to relax the minds of Boholanos.

Besides being daily acclimatized to an atmosphere of “fear” is an easy way to create a herd of fearful, directionless followers- easy prey to fascists and Pied Pipers who will melodiously waltz people down straight into the bottom of the Mona Lisa River.

Meantime, while we do not have tourists arriving yet, why not upgrade our quality of services? We can beautify our surroundings and clean up our shores like Boracay without using dolomites as sand like that in parts of Manila Bay?

Whatever happened to the plan to do massive planting of purple bouganvilla all through the stretch of the highway of the Bohol International Airport as well as to develop new local destinations?

When the pandemic eases, why not use the contract tracer budget and the excess of the Stimulus Plan to instead hire people and jobless individuals to plant trees across the province so we can all breathe fresh air wherever we go in Bohol? And help jumpstart employment?

Or even perhaps honor- in the process- the late DENR Secretary Gina Lopez who believed “she could fly and touch the sky” only to be axed at the Commission on Appointments aided by powerful voices and who a year after-died a broken-hearted environmentalist.

Or use the extra budget to build a new defense system for quarantine outside of our health centers as each LGU’s defense when the next pandemic comes (which will surely come as sure as Mayweather loving dollars) making us a better-prepared people instead of locking down communities to death?

Do these instead of dealing with overstretched government contracts and collaborating with strange-sounding characters like an Ivan or an Ivanhoe if you like and deal with sly foxes who sweet-talk people to part with their money to grow them -usually called “brokers”?

Ever realized why they are called that way, Watson?

Blessed Sunday – and Happy New Year to all our readers, advertisers and friends.