The Provincial Technical Working Group (PTWG) on Ubi Festival ’21 in the New Norm assured the public that strict implementation of the basic protocols is a must in conducting the festival slated on January 25 to February 24, 2021, at the Old City Airport, Tagbilaran City to avoid the possible spread of coronavirus.

This was stressed by Assistant Provincial Agriculturist Larry M. Pamugas who led the PTWG in conducting the three preparatory meetings.

Dr. Pamugas said that Gov. Art C. Yap has directed the PTWG to draw measures ensuring the conduct of the Ubi Festival in the New Norm to avoid affliction of the dreaded disease.

Pamugas disclosed that part of the measure they have drawn is the holding of the fest at the Old City Airport where social distancing can be properly observed considering its wide area.

In fact, he said that the distance between exhibitor booths is 10 meters while two meters for the table with barriers for the sellers and buyers.

He said that the wearing of a facemask is a must and upon entering the venue, guests should undergo a temperature check, hand washing with alcohol, foot bath before filling up log sheets for contact tracing.

Inside the venue, he clarified that they will follow the 50 percent allowable capacity wherein the members of the Philippine National Police (PNP) and Provincial Security Force (PSF) would help in controlling the number of people from getting inside.

In the opening program, Gov. Yap will lead in the giving of messages and the opening of exhibits.

Other activities to highlight the festival are the nightly entertainment, food fair, techno fora, Ubi cook off, arnis demo and Zumba.

Esmeraldo Maligsa, Bohol Ubi Growers Association (BUGA) president said that they have enough supply of Ubi tubers to be sold at the festival of which the Ubi Kinampay can be bought at P90 per kilo and P70 for other varieties.

Maligsa said that BUGA which has more than 100 members and other Boholano Ubi growers have experienced a good harvest this season.

The Ubi Festival has been institutionalized through an ordinance in the province aimed to recognize and award farmers who have been helping the provincial government to expand and sustain the Ubi industry in Bohol. (Atoy Cosap)

NOTE: THIS STORY WAS FIRST PUBLISHED IN THE BOHOL CHRONICLE’S SUNDAY PRINT EDITION. The Provincial Government of Bohol’s strategic framework for agricultural development which is anchored on the Department of Agriculture (DA) plans and programs has been cascaded down to the purok level. During the Orientation on Office of the Provincial Agriculturist (OPA) and Office of the Provincial Veterinarian (OPV) programs to the Sangguniang Bayan/Sangguniang Barangay-chairman on Agriculture Committee and Municipal Agriculturist, from the Local Government Units of Buenavista and Clarin last Friday at 4th Floor, New Capitol Building, Cogon, Tagbilaran City, Gov. Art C. Yap said that all plans and programs in agriculture in the entire province must be anchored on the DA Reform Agenda: Eighteen (18) Key Strategies. Yap said the 18 key strategies are the following: Bayanihan Agri Clusters; Collective Action/ Cooperative Development; Province-led Agriculture and Fisheries Extension System (PAFES); Mobilization and Empowerment of Partners to attain scale; Diversification; Credit Support; Post-Harvest, Processing, Logistics and Marketing Support; Agriculture Career System; Education and Training/Agribusiness Management; Youth & Women Management; Technology and Innovation; Digital Agriculture; Farm Technology and Mechanization Infrastructure Investment; Climate Change Adaptation and Mitigation Measures; Food Safety and Regulations; Agri-Industrial Business Corridors; Global Trade and Expert Development Promotion; Ease of Doing Business and Transparent Procurement; and Strategic Communications Support. The governor emphasized that the provincial government has focused and concentrated on rice, corn, high value crops, vegetables and fruits, coffee, cacao, coconut and dairy to ensure food security and safety. He informed the Agri stakeholders that Department of Agriculture Secretary William Dar during his visit to the province last June 4, 2021,to lead the turnover of P387M worth of farm machinery to the Boholano Farmer Cooperative Association (FCA) appreciated the agricultural plans and programs of Bohol for this year and beyond he presented to him. The…

Capitol yet to identify cause of high pork prices

The provincial government of Bohol has yet to identify the factors behind the high prices of pork in the province,…

NOTE: THIS STORY WAS FIRST PUBLISHED IN THE BOHOL CHORNICLE’S SUNDAY PRINT EDITION. The province of Bohol is one of…

DA chief Dar to arrive in Bohol for turnover of projects, meeting with solons 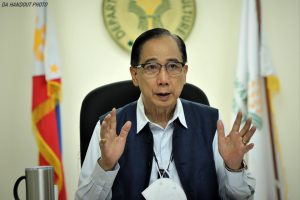 Bohol pork sufficiency at ‘231 percent’, but prices higher than average