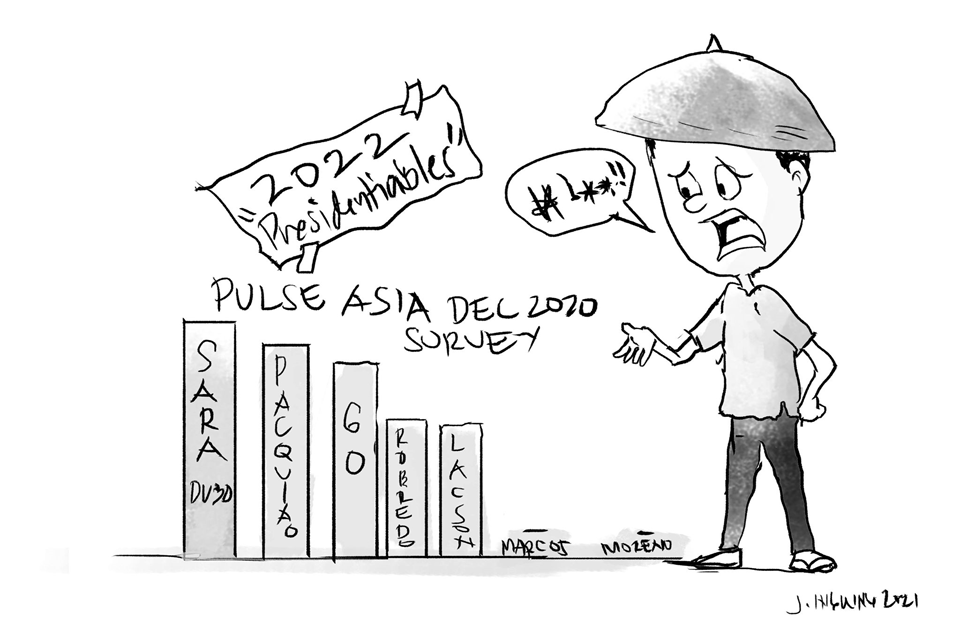 ABOUT THIS TIME NEXT YEAR,political arrows and bullets will fill the air , Flipinos could actually forget the crazy Covid-19 had just ended its cruel reign. Filipinos, they say, eat politics for breakfast. Once a group talks about politics, it will end only by midnight- and time to sleep.

There will be no losers- only winners – legends in the own minds of the discussants.

Each candidate for president is the “people’s choice”- the anointed one.

When Pulse Asia survey first touched the issue in September last year as to who Filipinos would vote for president, senators Grace Poe (25%), Manny Pacquiao (23%) and Bong Go (20%) ate up almost 70% of the total voter preference.

But when Pulse Asia decided to lump them all – including those who did well in the vice presidential survey in September- in the December survey, voila- it was Davao city mayor and presidential daughter  Sara Duterte at No. 1 with 26%. Newcomer Bongbong Marcos was tied for 2nd-3rd with Grace Poe (14%) and Isko Moreno was No 4 at (12%).

Erstwhile Septmber leaders Poe and Pacquiao lost significant points while worse performer was Bong Go who slid from 20% in September to only 4% in December. Fickle-minded voters?

No matter how the dice is thrown, there are three immutable factors that can determine the presidency:  (1) transferability of the endorsements (2) consent of the candidate to run and the (3) popularity of the incumbent president at the time of the polls in 2022.

For instance, a political analyst said the recent high 91% popularity of President  Digong Duterte did not match the much lower 26% preference for daughter Inday Sara- meaning there is no actual one on one correspondence between the two.

Consent is crucial- and Sara just begged Pulse Asia and other pollsters to kindly remove her name from the presidential wannabes  survey because she wants the presidency like a “hole in her head”.

And the ever-doting father Digong is his more casual moments and realizing the tremendous stress of the presidency had said it is “not a job for women” – although he may have aimed the gun at VP Leni, actually, and not to Sara herself when he mentioned that.

Although we wish she had, the body language of Senator Poe, despite her near excellent Senate performance, speaks of cold disinterest and she had publicly said she has no plans to run again in that punishing race for the presidency.

Rep. Loren Legarda, to cite another example, who topped the Senate race twice and lost the vice presidency twice as well (2004 and 2010 with FPJ and Manny Villar) when asked a few days ago whether Loren was aiming for any of the top posts in 2022- just answered with a loud laughter- with a quizzical eyebrow “Magkagalit ba tayo?” – meaning, for you to ask me such a question.

Pacquiao’s installation as head of the party in power PDP-Laban seems like a hedge bet in case Sara is truly uninterested in the presidency. And the politically-savvy Pacquiao, sensing he dropped significantly from 23% in September to only 10% in December suddenly announced he will fight  (boxing again) definitely in 2021.

In the hope of a blockbuster win ,perhaps, to shore up his waning political influence-even taking a patsy UFC warrior just to score a sensational win- and a political checkmate?

The fate of Digong Duterte’s anointed and his pet peeve will both depend on actually how popular Digong will be by January-May 2022. Popular presidents FVR and Noynoy Aquino failed to make their candidates in Joe De Vencia and Mar Roxas, respectively, win; Cory Aquino barely made FVR win.  The grossly unpopular GMA pushed down her candidate Gibo Teodoro to 4th palce garnering only a dismal 11% in the 2010 polls.

And let us remember we are still an “eternity” away from May 2022 polls in a metaphorical sense. At this same point in 2015, Duterte was not a hot rod as he finally showed in the actual May countdown. Surveys are just snapshots of public opinion at a certain limited point in time.

Last Monday, Sara Duterte quietly breezed into town incognito to take a “bubble break” at the Hennan Resort in Panglao.  Rightly, she informed no one among the local politicians of her presence here, Perhaps, in order not to disappoint any of them who will be courting for her support when-and if- she announces her presidential bid or when they announce theirs for local posts.

The flamboyant former presidential spokesperson Salvador Panelo anxiously made propaganda capital of a survey run by Pahayag Vis-Min showing majority of the voters in the two  major regions voting for a daughter -father tandem (Sara-Digong) in 2022. The second factor of “consent” was obviously not considered here.

Digong, from where we sit, is a tired man and will have nothing to do with politics after his term; his only concern is legal protection from whoever will be in the Palace by 2022. The survey also conveniently forgot that while Mindanao and Visayas account for 44% of the total voting populace, the biggest chunk is still inLuzon at 66%. And  the Pahayag  survey did not consider where the young voters- the demographics are- crucial in a poll situation, any time from hereon in this country.

Some 38% of those surveyed in the “Inyong Alagad” radio survey said they have no objection to the dynastic team of the duo.The “no objection”  does not necessarily translate into votes- dependent on one crucial factor – who the opposing tandem will be when combined as a whole.

Majority of the 62% who did not like the Duterte tandem questioned the lack of concrete success in the drug war that Digong promised to end in one year. They also want to see many more real heads and scalps on top of totem poles to prove that Duterte’s anti -corruption stance is for real and not just for political drama.

These dynamics leave the field quite open for a “fire-eating”miracle maker in 2022 to wrest away the presidency from the “usual suspects”. The likes of a charismatic Manila Mayor Isko Moreno  (who has been topping the vice epresidential surveys in September and December) could become a dark horse.

Like Pacquiao, Isko’s life story – of the “rags to success” type resonates well with the biggest voting sector – the D and E sectors. These are the people who  relentlessly pursue hero images  in their fertile minds and like success to come to people who come from their kind.

Isko says he is more interested in serving the people in Manila.

Public statements of politicians, though, are never the same as private thoughts.

But you are digressing, Watson.

Caution against early celebration to due to vaccine arrivals

THE FACT IS THAT for close to a year now, Covid-19 has claimed only over 11,000 lives in the entire… 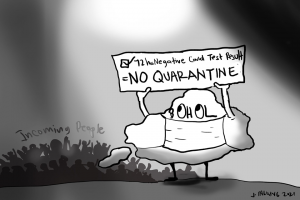 The enormity of God’s love for man

”THE TRUE MEASURE OF LOVE” Is to love without measure. Despite what Romeo and Juliet and modern romanticism have brought to… 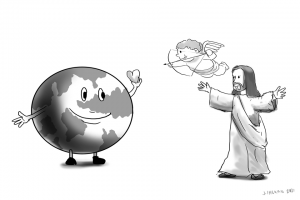 Today, February 11 is the 100 th birthday of Atty. Zoilo Dejaresco, Jr., founding editor-publisher of the Bohol Chronicle, who is… 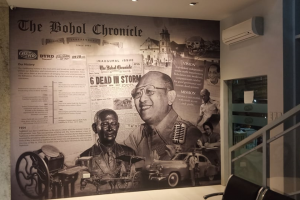 BOHOLANOS HAVE PRAYED FOR months for a  silver bullet to slay the Covid-19.  Now that we have at least 15 credible… 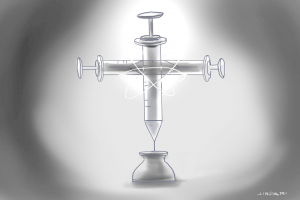