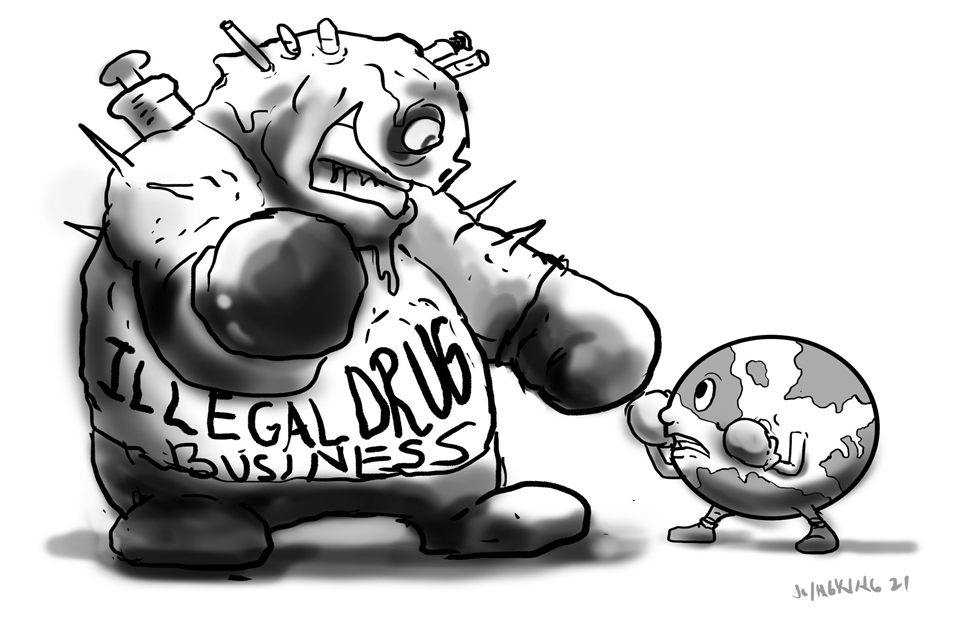 In the Philippines, the crime rate has somewhat abated, but there is no scientific study to relate it directly to the supposed drop in drug users here. If we are to believe, the Dangerous Drug Board said, that after three years of a brutal drug war, there are now only 1.7 (2 for every 100 Filipinos)  drug users compared to 4.0 in 2016.

According to experts while the pandemic closed the normal drug routes due to restrictions, more creative ways (like postal mail) are now being used. Because many have become poorer and more depressed due to the lockdowns, more are attracted to get high on drugs and find “business” opportunities in their illegal sale.

Former anti drug enforcer Colonel  Romeo Curamat last year said that the authorities are kinder presently to low-level drug offenders, hoping they could lead police to high level drug lords and traffickers. Justice Secretary Menardo Guevara, on the other hand, last week -also told the United Nations Committee of Human Rights that 50% of the time, there were lapses in drug operations here.

For instance, the so-called .38 calibers found near dead drug suspects were never documented and some were even recycled. And more than half of the drug operations did not observe proper protocol. That’s a mouthful for a  justice secretary to say before the United Nations body.

Also, it is only recently that the PNP members are wearing body cameras (P280-Million budget) in drug operations, a long delayed reaction to long-time suggestions.

On the supply side, President Duterte himself lambasted the Bureau of Customs just last September for failing to stop the entry of drugs there. In 2018, recall that the BOC itself was placed under military control as tons of drugs already apprehended still slipped off through the BOC gates.

Ironically,, for a while, even the National Penitientiary also became a drug laboratory and  national drug distributor, Bilibid it or not.

The president likewise named many LGU heads as drug protectors, though some of them have been arrested and others disappeared from the face of the earth.Then there are the terrible Ninja Cops who recycle confiscated drugs and become dealers themselves.

In an SWS survey 78% of Filipinos believed there are Ninja cops in the PNP including one former PNP chief who was openly protective of them. He resigned but we heard no charges against him- nor for any of the so-called Ninja cops.Have you?

There is a growing sense,too, that while authorities are often trigger-happy with street drug users, alleged drug lords like Peter Lim of Cebu are walking like peacocks on the street. And there are many other Peter Lims in this country,as well.

How bad has the drug trade corrupted the minds of the authorities?

Review the “mistaken” shoot out last week in Ever Gotesco, Commonwealth Quezon City where two Quezon City cops and a PDEA agent and informant were killed in a long gun battle that gave civilians a view of the Gunfight at the OK Corral.

As the PDEA claimed they were on a “sell bust” , then they are no better than the Ninja cops. That the PNP was also there for a “buy bust” operation without coordination with PDEA is in violation of Section 86 of RA 9185 of the 2002 Comprehensive Dangerous Drugs Act. It was a case of the kettle calling the pot : “you’re black” . They both, are,

So, how in Lucifer’s blasted name can Duterte ever solve the drug menace with such dark souls committing the very crimes they are tasked and paid to solve? The president has called endemic corruption and the lack of the death penalty that have set back his drug campaign.

It was  Col. Curamat,too, who also implicitly admitted that the drug menace is very much around -and “any one can buy drugs any time”. Could this go on without the protection of the powers-that-be?

In Bohol, there is daily haul of arrested users and pushers, one recently in Booy with P300,000 worth of shabu.

Could it be that some left-over drug supplies are still warming inside lock and key  here due to pandemic and released only when the opportunity presents itself?

Because  as we know -K-9 dogs of the PPA and officials are watching tightly the seaports of the city, Tubigon and Jagna. Or is trading still done the old-fashion way through the coastal areas involving fisherfolks?

It is in nations like ours who treat drug addiction as a criminal/legal problem rather than a medical/health issue  where failure is bound to happen.  This is shown by the utter lack of rehabilitation centers that government had always promised but never delivered. Thus, 50% of those arrested are recidivists (“balik-preso”) as their basic illness is not cured and even often aided by the legal maneuver called “plea bargaining” where freedom  or bail is allowed in exchange for admission to the crime.

And somehow, somewhere , there are still what Erap called “the hoodlums in robes” out there- judges who weaken on their knees at the sight of the precious drug moolah.

These -and others, still- present the current barriers why the Drug War which President Duterte promised he would finish in months may take years to do-  maybe,way even after his presidential term.

This frigging problem is a tough nut to crack, Watson. It is both a demand and supply problem.