The image of the Capitol in tatters
Advertisement 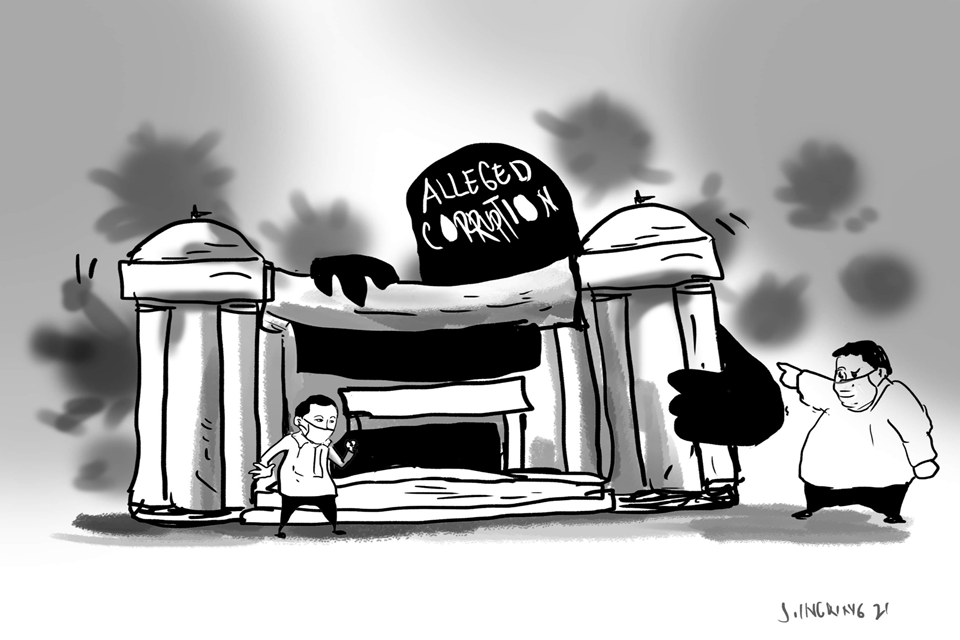 “WHERE THERE IS SMOKE”, there is fire, even the elders spoke so. So much smoke has come out of the Capitol of alleged massive corruption. So far, no fire has been found, yet. We are a democracy, that is why only the courts of law can establish the existence of a fire.

Thus, the formal complaint -affidavit of whistle-blower former city mayor Dan Lim at the Ombudsman Manila versus Governor Art Yap, Provincial Administrator Kathryn Fe Pioquinto and the members of the provincial BAC (Bids and Awards) Committee for a total of P114-Million in questionable deals is watched ardently by a disturbed public.

So far, the recent allegations of graft seem to have been stalled by the sudden disappearance of courage among the accusers in public. Whether through a stroke of fear, practicality, or conscience, we leave that to them and their Creator.

The quarry operators who tagged a certain Mr, Ivan as fleecing them of a percentage from their operations are now quiet as doves. Why? Are they fearful of totally losing their business? Likewise, the frequent mention of a certain Mr. Sy as an outsourced bagman of the Capitol for large-scale projects suffered from a lack of a formal complainant. Will someone explain their sound of silence currently?

Boholanos, sad to say, seem not to have the DNA to expose irregularities in government. Sad in the sense that as Kamal Haasan quoted: “When you do not take a stand against corruption, you tacitly support it.” Do you support corruption? What does the complaint of ex-Mayor Lim say?

For starters, there is a mysterious trading company in faraway Cabuyao City, Laguna which has just an address and basically nothing else which cornered P90M of negotiated deals. One involved an alleged overpricing of  8 Honda motorcycles by P278,000 based on available market prices. Some communication and security systems worth P68.7M where “computers were overpriced”; same with a Basic Life Support Ambulance worth P20.9Mwhich did not reportedly reflect current prices.

The others involved two local companies: one cornering mobile X-ray machines allegedly overpriced by P2.8M/each or P 17M altogether and a delayed award of contract in December for sound systems for an event PHILTEX which already occurred way back in September worth over P700,000.

The case of the Laguna company is particularly striking because purchases from such may incur other handling and transport costs compared to being bought here or somewhere nearer. Besides, the road to Laguna to Bohol can be quite daunting with changing health protocols in every province.

The case is the first to be filed against the Governor and his allies in his first term of office. It can open an avalanche of cases of past dealings and put to microscopic scrutiny any and all future financial forays of Capitol in their approved projects.

It was also remarkable in the sense that the case reached national media and questions had to be answered before a national audience. First, Governor Yap’s defense was to wash his hands and say it is all BAC’s doing- his signature is nowhere in the BAC recommendation as he is not a member.

The trouble with that is that many know that as head of the purchasing entity (provincial government) in behalf of its many end-users (agencies. LGUs etc), the governor cannot be a member of the BAC even if he wanted to. Besides, as the “head steward of the resources” of the province, he had the right to approve or veto the recommendations of the BAC. One must not forget, likewise, who appointed the members of the BAC in the first place.

At best, awarding P90M to a nondescript trading company off Luzon, common sense dictates, should have already raised red flags at the Capitol pronto. Does Governor Yap know or does now know a certain Mrs. Salcedo who reportedly owns the mysterious trading company? She did sign the contract agreement with her residence certificate number 20202607 affixed to it.

For reasons he only knows why the governor has lately ignored any interviews with the DYRD-Chronicle media group but was quick to answer these allegations over DYRD’s ” Inyong Alagad” last Wednesday when the hot news was eating like fire into the very walls of the Capitol.

His next defense was this is merely a political assassination for 2022 polls (“baseless charges to make media propaganda to win the election”). Thus far, no one has indicated he will run for governor except for Yap saying he is gunning for reelection against all comers. Who was Yap alluding to? Certainly, we cannot answer for ex-Mayor Lim what his political plans are- if there are any.

At this point, people think that the motivation- even if political – is secondary to the question of whether the allegations are true or not. Last Friday, in the Tagbilaran By Night survey, 85% of the people did not think the charges are politically motivated but hoped that the Ombudsman will give the trial fair treatment.

Of course, Provincial Attorney Nilo Ahat, who is head of the BAC, said over DYRd that they will answer all the allegations once they get a copy of the complaint-affidavit and the attendant annexes of evidence. Cited as being violated are sections 3 (e) and (g) of RA 3019 or the Anti-Graft and Corrupt Practices Act and the Serious Dishonesty and Grave Misconduct as defined by the Civil Service Commission.

Many, on the other hand, are still having a hangover over the charges (some dismissed) filed against Yap as Secretary of Agriculture under the incumbency of President Gloria M. Arroyo.

The complainant likewise requested the Ombudsman to ascertain why most of the Capitol deals are negotiated bids and if this is consistent with the spirit and the letter of the RA 9184 of the Government Procurement Reform Act.

With this formal charge sheet against the top provincial executives, henceforth, many questions will be thrown into financial dealings involved in the multi-million forays of Capitol into otherwise legitimate government projects. One will be the P678-M hospital modernization and purchase of heavy equipment projects aided largely by a loan by the DBP (Development Bank of the Philippines) and the P1-B of P2-B Omnibus Line project accorded by the LBP (Land Bank of the Philippines) through a supervised term loan instrument for LGU water projects.

Even their chief executives like Cecille Borromeo (more than 30 years as government bank executive) President of LandBank and Emmanuel Herbosa (formerly from the Ayala-BPI Group)  President of DBP are professional bankers who would like to see that their project-financing to LGUs is carried out with integrity and propriety.

Right now, Capitol is shot full with holes about graft allegations. This test case will prove whether any of the mud thrown at the Capitol is well deserved or not.

Right now, Capitol’s image is in tatters and it must prove all this is not real- a mere fantasy turning into its worst nightmare currently.

AS EARLY AS 2020,  astute scientists had already predicted that the Covid-19 virus (like  most viruses) will mutate-but never expected…