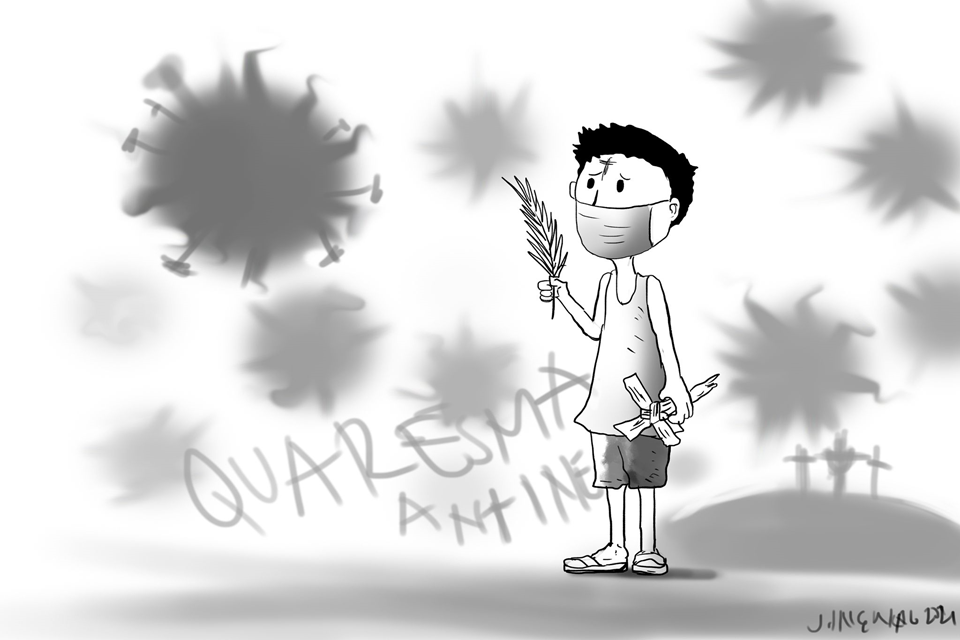 THIS IS THE SECOND HOLY WEEK wherein people are once again brought to a deeper meditation on the true meaning of an ‘extraordinary situation’ such as this pandemic.

In a radio survey conducted by DYRD’s top-rated program “Tagbilaran By nite,” a supermajority of 93% of the respondents said that they were brought to a deeper state of reflection on the meaning of life since this pandemic started a little more than a year ago.

The respondents said that while they used to take things for granted before, like the gift of life. This Covid 19 crisis made them realize how valuable it is to wake each day with a brand new lease of life. Many people die in their sleep, even.

The “fear” factor brought about by this pandemic has made people value the blessing when one wakes up in good, healthy shape, perhaps blessed with a buoyant immune system.

It is the same big “fear” to get contaminated by the virus that has often led one- even the semi-agnostic, hedonistic types, to become more prayerful, most of the respondents said. ” Be still, know that- I am your God”, is a soothing assurance.

The survey likewise tallied on people’s consciousness that after a year of following health protocols, there is indeed intrinsic importance in discipline. it made people realize the need for each of us to maintain hygiene among ourselves.

Who would ever imagine that things like washing of hands will become part of the “news” as well as the wearing of masks which we can only imagine seeing inside hospital’s emergency rooms. Or for the oldies, used by masked criminals who robbed banks in the Wild West and the cities, as in the movies- to hide their identities.

Did one imagine that from toddlers to senior citizens, each one can now be seen wearing a face mask and not doing so not just becomes the biggest taboo, but can lead to reprimand, even jail terms?

Likewise, this Holy Week, people are made to feel the meaning and the power of prayer.   Every member of the family has learned to pray for one another, especially one who becomes a Covid victim ; his life, hanging on the balance, from the virulence of this unknown virus.

The spirit of praying for one another was only felt much when this health crisis started- creating the notion of all being their “brother’s keeper”. Or “he ain’t heavy, he’s my brother”, as Donny Osmond used to sing.

Finally, some of the respondents sigh that if there is anything to be thankful for in this crisis, it is Nature’s exchange of having now a much cleaner environment. All standard measures of air cleanliness all over the world are positively up as reported by CNN.

Just like in an island province like Bohol, behold how our seas had transformed into silky clean compared to before- the waves now bluer than blue.

On the other hand, the radio survey also said that the pandemic afforded people the time and the consciousness to reflect on things as they are- and how they should be. This new awareness apparently emboldened the Common Tao to become more vocal and critical of lousy governance since our health is agonizingly at stake with people in government not taking or implementing health protocols seriously.

We expect the provincial government to come hard with its sanctions on alleged violators of the health protocol. On record – pending sanctionable are the cases of Panglao Mayor Nila Montero who did not go on isolation upon her arrival from Cebu and that of Jagna Vice Mayor Theodore Abrenilla who broke protocol by moving around upon arrival  from Cebu instead of going straight to his designated quarantine area.

Likewise, the case of Dauis police chief Benedicto Tanola for contaminating his fellow cops after he went straight to the police station from a trip Cebu. These three government figures should be meted accordingly otherwise they will create the image of a double standard implementation of the health protocol here.

Overall, a lot of good has emerged unexpectedly amid the hammering blows each of us had to bear in this unprecedented test of a virus, still currently studied by science.

REFLECTIONS OF A BILL GATES

WHETHER THESE GOLDEN REFLECTIONS  going viral in social media for quite a while now- really did come from one of the world’s richest men Bill Gates or not- is really of no moment. The wondrous lessons it imparts have allowed the pandemic to transform the rough desert of despair into an oasis of peace and love. It reminded us:

* We are all equal regardless of culture, religion, occupation, financial situation or how famous we are because the disease spares no one;

* No man is an island and what affects one person has an effect on another and blasts all the borders we built around us because the virus respects no wall and has no passport.

* How precious our life is and how we had needlessly weakened it by eating manufactured food and water contaminated by chemicals upon chemicals.

* How short life is and the need to help each other especially the elderly and the sick.

* How materialistic man has become that in times of difficulty such as this, we begin to realize to separate the necessities from the luxuries; the needs from the wants.

* How important the home and the family is- which we have often neglected in better times.

* That our true work is not our job (that is what we do), not what we are created to do. What is your purpose in life? Where do you make a difference?

* To keep our ego in check- because no matter how great we think or others think we are-a virus can bring our world to a standstill.

* To exercise our free will- to cooperate and help each other or be selfish and to hoard and look after oneself alone.

* That we have the choice of free will- to understand that this situation has happened many times in the past or panic and see this as the end of the world and traumatize us.

* This can either be an end or a new beginning. A time of reflection of our mistakes or it can be the start of a cycle that will continue until we finally learn the lessons we are meant to learn. SHALOM.