Teaming up with the best: the Philippine Daily Inquirer
Advertisement 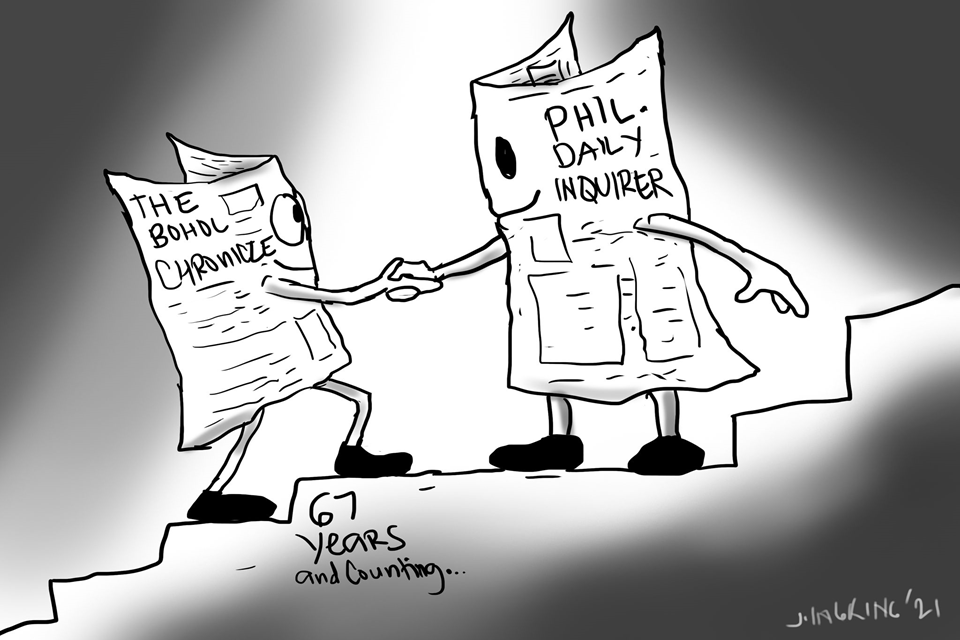 IT IS A GREAT HONOR, for the Bohol Chronicle, now on its 67th year in community journalism, to be chosen among the eight local papers to be a partner of the Philippine Daily Inquirer (PDI)

Established in 1985, in the last months of the Marcos dictatorship, PDI is the most awarded broadsheet in the country (600 awards) “for chronicling events with passion and excellence”.

Through a shared digital platform, using the Inquirer Plus.app, a subscription package will allow the reader to access both the Inquirer Plus-digital version- and the local paper of one’s choice, say The Bohol Chronicle. This would be doubly attractive to Boholanos in the Philippines and overseas.

It is called Inquirer Plus because there are articles in this digital version that are not found in the regular PDI issues. In our case, the subscriber will get his daily PDI-Plus and the Sunday PDI-Plus paired with the entire issue of The Bohol Chronicle in digital form.

The subscribers get the advantage of paying only once for one national and one local Newspaper in one bundle. According to PDI CEO, Atty Rudyard S. Arbolado, one of the factors considered in the choice of partners was the “trust factor accorded by the readers” of these local newspapers.

Roy Raul Mendiola, PDI national sales manager, concedes that local papers have “unique networks and ones with eyes and ears on the ground.” and the partnership will help sustain “local journalism”.

The Chronicle sees a symbiotic relationship with PDI as well as we get the freshest national news from them while our local news could acquire a national audience I.e. loyal PDI subscribers who are equally interested in Bohol news.

The entire Sunday edition of The Chronicle will be tagged in the subscription giving a wider potential reach for articles and advertisements. A 30-day trial period is on stream now ( see details on Page One ) and we are excited about this merger of strengths.

The theme of “Stronger Together” is apropos to this functional merger and we hope to see some Bohol news of national interest to even land in the pages of the PDI as well.

Once the subscription picks up, the Chronicle advertiser will get another layer of an audience – those readers interested to have both national and local content in one newspaper subscription.

A dominating readership role, 67 years of experience in all of the weeks (save one) and our own share of 5 national awards from the Philippine Press Institute in the last 10 years are the stuff we offer in return to PDI, doubtless, the national paper of choice of the thinking Filipino.

Our heartfelt “thank you” to PDI and our best wishes for a successful partnership.

LEARNING FROM “THIEVES” AND “REBELS” IN BIBLE

A 1961 MOVIE “Barabbas”, supervised by the great Dino De Laurentiis and based on a Nobel-prize winning book, we watched over the Holy Week period.

Played by Oscar-winner the late Anthony Quinn, “Barabbas” was a thief and rebel who murdered a Roman soldier. As a “Passover” ritual, governor Pontius Pilate was to forgive one convict and release him to his freedom. Washing his hands to avoid accountability, he allowed the Jewish crowd to choose freedom for Barabbas and death by crucifixion for Jesus.

“Barabbas” always felt guilt over the fact that Jesus was killed in lieu of him. ” You died for me” was a literal sentence that always cropped on his mind ever since that day.

His girlfriend Rachel, moreover, had become a follower of Christ and was stoned to death for her belief. He became a rebel once more and was sentenced to life to work in the sulfur mines in Italy where he was slowly indoctrinated by Christian prisoners.

“Barabbas” was given another freedom when as a prisoner, he killed Rome’s best gladiator Trovaid (Jack Palance). He had felt something strange on the afternoon when Christ died on the cross. Told that Christ was to rise from the dead on the third day, he went on Easter Sunday to see Jesus’ empty tomb.

He sought Peter and other apostles and was told to speak to Lazarus who narrated that the Risen Christ is above death as he himself (Lazarus) was raised from the grave by Jesus. At this point, Barabbas had repented for his many sins against God and society.

So, one day when the Christians burned Rome ( of Emperor Nero who was fiddling on the roof) to the ground, Barabbas participated in the arson, was arrested and then crucified to death in the name of his newfound Savior.

In the Bible, another thief Dismas (sometimes called Dimas), crucified with Jesus (on His right side), atoned for his sins and asked that he be brought to Heaven. Jesus said, “Amen, I say to you – this day you will be with Me in Paradise.”

The bad thief (Gestas) at the left side, meantime, scoffed at Jesus, challenging Him that if He was really the Son of God, to come down the cross and save them all. He was full of hatred for the Romans that brought him to justice, unrepentant of his sins, and a total disbeliever in God. What lessons can be learned from the three?

All of us are sinners. But there are those who are Greater Sinners than others.

They are those who continue to be corrupt -to steal from others and the government- and persecute those who expose and oppose them with threats, bodily harm, legal attacks and economic strangulation- so they can go scot-free and continue with their evil ways.

In our own imperfection, allow us to call these men to kindly become “Easter People”.

“Easter People”, being those who rise after their fall from sin, to atone for their misdeeds, restore what they have stolen and make amends to others they have done harm in whatever way and follow the path that Christ had shown us so clearly in His public life. In His death and Resurrection.

Remember the saying ” if winter is here, can spring be far behind?”. Or put in another way- if there is Good Friday, there must be an Easter Sunday.

God will make a Way. SHALOM!