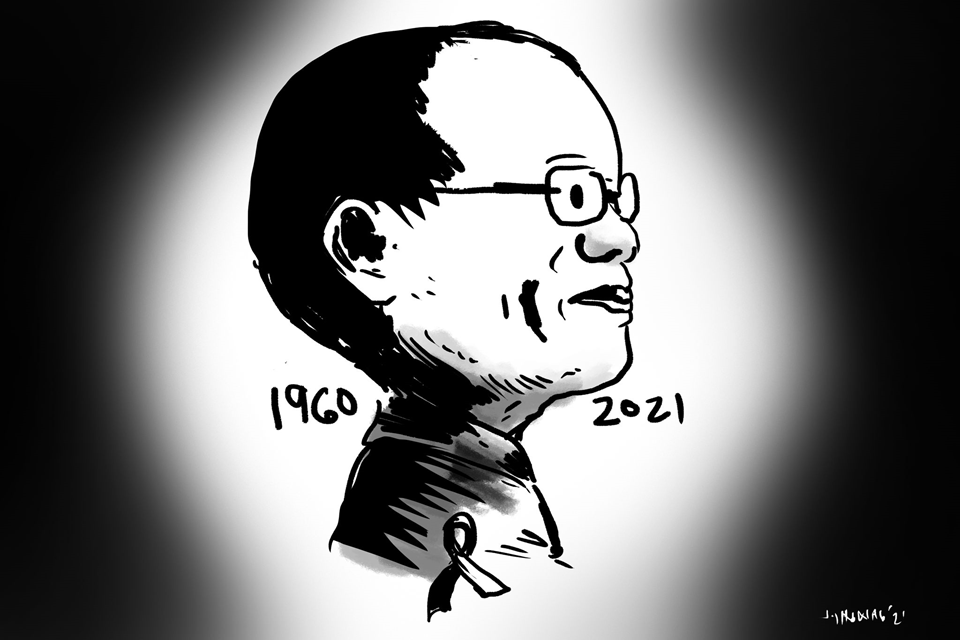 IF ACTIONS SPEAK LOUDER than words, then the late President Noynoy Aquino indeed loved Bohol like a true friend. The aftermath of the 2013 7.2 magnitude Earthquake says some of it, but not all.

An early morning earthquake in October 2013, the equivalent of 32 bombs dropped in Hiroshima, Japan in World War II, ripped the innards of Bohol; the strongest since 23 years back in 1990. Bohol, unfortunately, was at the epicenter of Nature’s fury.

Some 1.2 million Boholanos were affected with about 340,000 (about one-fourth of the total) were displaced economically and physically while 195 of 222 deaths were in Bohol (we only have so far, 74 deaths due to Covid here). Some 79,000 structures made of homes, roads, bridges,  churches and public buildings were damaged- 14,500 of them totally destroyed.

Twenty-five historic churches, many centuries old with rich cultural stories behind them, were damaged-four of them in total disintegration. Meantime, 71,900 residences were damaged, 14,480 of them – totally.

Neither a world war nor previous calamities inflicted such merciless a beating.

Immediately flew President Noy to oversee the relief and rehabilitation efforts according to then Gov. Edgar Chatto who saw all upfront and personal. He immediately visited the 5,000 displaced families housed at the Bohol Cultural Center and had assembled the Cabinet earlier to put the wheels of government into motion. No dilly-dally.

The overwhelming empathy of Noy over those in misery caused him to visit Bohol twice and once he stayed overnight in a vacant lot in Lintuan, Loon- using an Army tent.

Soon after, the world’s strongest typhoon roared and hit the Visayas including Bohol. Senator Ping Lacson was designated “Yolanda Rehab Czar” centered in devastated Leyte. In the Bohol Rehabilitation Plan, Gov. Chatto pleaded that Bohol be included in the Leyte Game Plan.

The result of the rehabilitation and restoration efforts was as impressive as the presidency of Aquino.

The BEA (Bohol Earthquake Assistance) of P2.413-Billion was set -restoring 412 government facilities by 2015. The DILG-UNDP KALSADA (CMGP) Road project for the maintenance of core roads and national-to-local roads was conceptualized and founded here.

Meantime, 21 of the fabled churches have been restored although four remained subject for completion-delayed by the entry of the pandemic. One must note that 11 of the 25 churches were restored using government national funds.

In more pleasant times, during the 2010-2016 era of President Aquino, three major projects were started although the present dispensation basked in the glory of its final completion.. For instance, the world-class, eco-friendly, P7-B Bohol-Panglao International Airport got its final nod of approval and locked-in funds from the JICA in Aquino’s reign.

In fact, in gratitude to Noy, in one of our facetious editorials, we joked him that the Panglao airport expects to welcome him next aboard a plane with his future spouse in tow and enjoy this tourist island. (Alas, he remained in blessed singleness until his untimely death).

The old Capitol was partially damaged by the quake, so the beginnings of the sprawling new Capitol Building with a tag price of P700-M was started then. Now it stands proudly as the biggest government building built by the DPWH in Central Visayas- complete with solar panels and its own sewage facilities.

Under Aquino’s “Heritage Restoration and Reconstruction Progam”, the old Capitol has been transformed into a Bohol branch of the National Museum, with 1,256 square meters of floor space housing 861 sq m. For galleries and 112 for offices.

As unassuming as he was in accepting the challenge to run for the presidency after the death of his noble mother President Cory Aquino in 2009, Noy, the silent worker and true ally of Boholanos- also left quietly into the night.

On the fateful early morning of June 24, Noy breathed his last- later to join his parents Ninoy and Cory in a blissful and joyful place where there is ” no weeping and gnashing of teeth”.

OFFICIAL STATISTICS FROM GOVERNMENT are verifiable; fake news given by trolls are figments of the imagination and financed by propaganda money. What do you believe in?

People can listen to both versions -after all, everyone is entitled to one’s poison.

Was President Noynoy Aquino a good Chief Executive? Here are the official numbers.

From the 2010′ s No 85th most competitive and therefore attractive nation to the world, in the  World Economic Forum Comparative Rankings, RP shot to No. 47th. Reducing tax evaders,  doing good governance and reversing the worst economic deficit ever, RP merited 8 Investment Grade upgrades by world rating agencies like Standard and Poor.

Because the economy was booming, unemployment was only at 5.7%. This shot to 8% this March due to the pandemic and lockdowns. This attractiveness then propelled the low $11.7 B Foreign Direct Investments coming to RP to almost double at $20.4B.

Thus the stock market indices were turning blue and people had enough disposable income to afford houses and cars, resulting in massive traffics in Manila, Cebu and Davao.

Inflation or the barometer of prices (mostly food) was driven to a low of only 1.4% from 4.5%. At the height of the crisis last year, inflation hit 6.2%,  the prices of basic food almost beyond reach by many. Because the government had so much cash (Dollar Reserves at record levels), some expensive debts were prepaid and high-interest rates negotiated lower,  even as the Debt to GDP ratio of RP improved significantly from 54.8% to 44.8%.

The high Dollar Reserves left by the Aquino government enabled the present government to borrow extensively at acceptable rates to address the hunger needs and medical demands of the Covid crisis.

People had money and were traveling -increasing the Domestic Tourism receipts from P713B to P1.5 Trillion and Foreign Receipts from P112B to P227B. Meanwhile, the AFP Modernization Program was enhanced from just P26.2B to P59.2B because the government had adequate funds. This was confirmed by current Defense Secretary  Delfin Lorenzana who also worked under the Aquino government

Because of the enhanced PPP program, some 7.7 million poorest of the poor Filipinos were benefited and out-of-school children dropped from 11.7 million to just 5.2 million. For the same reason, Philhealth coverage up to P93.45 M from P47.07M and Social Services Budget ballooned from P416B to P 1.105 Trillion.

In Aquino’s term, the Laguindingan Airport was finished, 8 new airports started and rehabilitated 63 airports and 18 tourism ports. The new National North-South Railway was in place and a total of 18,547 km of the new road network was finished -almost equivalent to the size of the Great Wall of China.

In the war vs. corruption, 784 cases were filed against crooks and Aquino had Janet Napoles and three other guilty senators jailed for PDAF graft. His motto was ” Walang mahirap kung walang Corrupt.”

Noynoy Aquino was so sensitive about graft in public projects that he would rather postpone a project if there is a taint of corruption taking away from the people’s taxes that funded them. Thus, he ended with excess cash after his term of P1.7 Trillion due to underspending.

Yet, he saved that and still achieved an average GDP growth rate of 6.2% (according to a Bloomberg study) in his six years term, twice exceeding a 7% growth making RP the leading growth nation in Asia.

For this economic miracle and bringing respect to the presidency by upright governance, Noynoy was named the world’s Top 100 Men of Influence of the year 2013 by the Times Magazine.