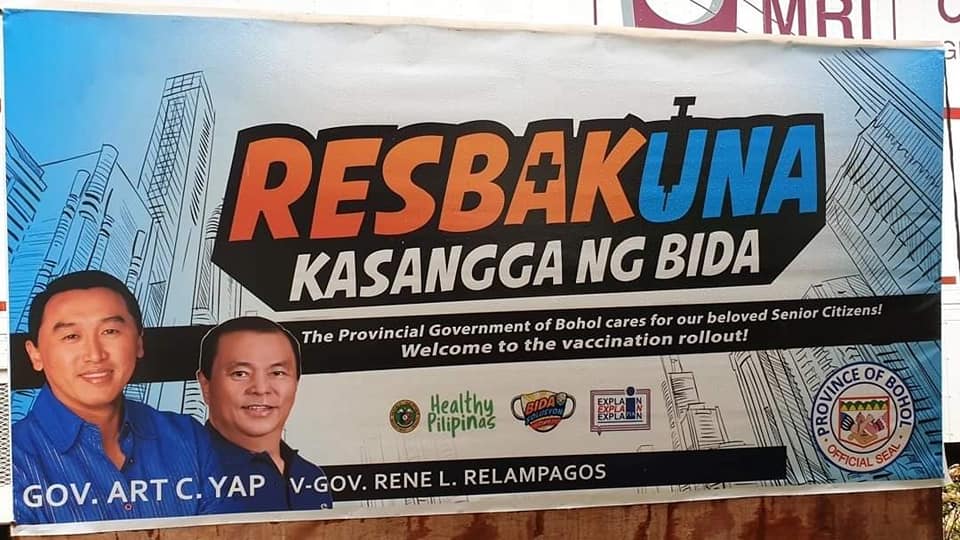 Governor Arthur Yap has defended the heavily criticized display of his name and face in various government project markers and paraphernalia, saying that his portraits are printed on the materials for accountability.

According to Yap, it was acceptable for his name and face to be displayed on the materials as he is a public official.

“My name and my face are not personal. I belong to the people as a public official,” Yap said during the Capitol’s weekly press briefing on Friday.

Yap added that the display of his name and face is also meant to show the public what his projects are.

The governor also assured that there was no credit-grabbing involved in the display of their portraits.

He said that his face and that of Vice Governor Rene Relampagos are only printed on projects of the provincial government.

“Akong gihatag na kasiguroan ninyong tanan na I am not taking advantage or credit of any government project that we are not responsible for,” he said.

Among the project markers printed with Yap’s and Relampagos’ faces and names are those of the “Resbakuna” campaign, the national government’s COVID-19 vaccination program.

The vaccines used for the massive inoculation drive are mostly procured by the national government while some are donated by other nations and the World Health Organization through its COVAX facility.

Previously, Yap also drew flak for activities deemed by critics as early campaigning including his rounds in villages to personally distribute financial and in-kind aid amid the pandemic, in which mass gatherings are prohibited.

There had been appeals from various sectors urging Yap to instead deposit the cash aid and have the goods distributed without fanfare and ceremonies, which could lead to the spread of the coronavirus. The calls however were downplayed by the governor.

Yap has also been documented in photos and videos as he led gatherings joined by crowds while not wearing a facemask and face shield.

Also among those distributed by Yap and his team were IDs of BALAs (barangay livestock aide) which also display images of the governor and Relampagos.

“These pictures of politicians on permits and licenses affect the cost of printing that the applicants are shouldering,” Belgica said.

There is also a provision inserted in the 2021 General Appropriations Act (GAA) dubbed “anti-epal” which disallows politicians to emblazon their faces, names, or logos on projects to be funded by the 2021 budget.

“Taxpayers, not politicians, fund the projects and programs. Their names or photos have no place there,” said Sen. Grace Poe who introduced the provision into the GAA.