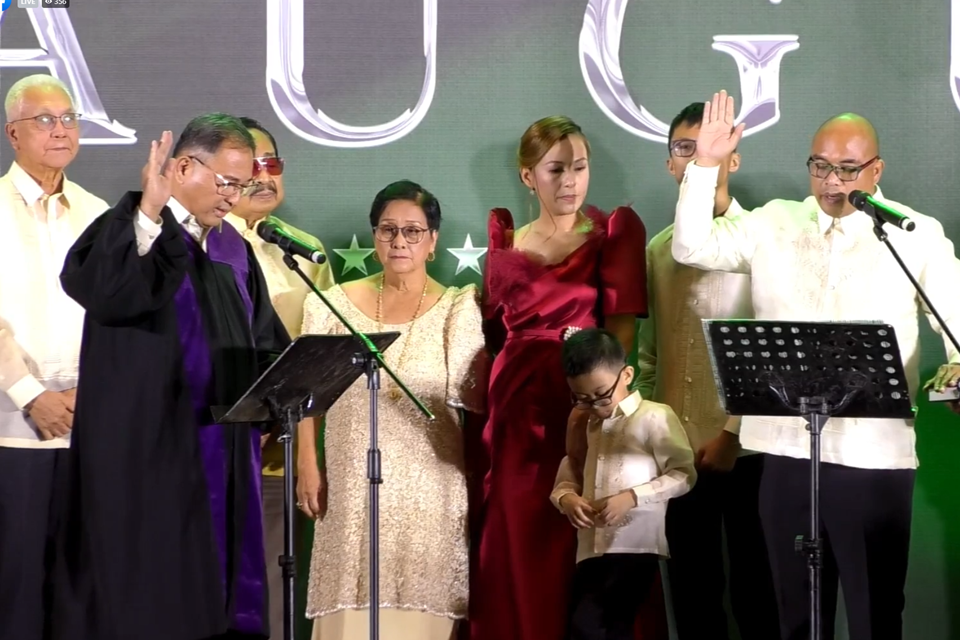 Erico “Aris” Aumentado is now officially the 27th Governor of Bohol after he took his oath of office at the Bohol Cultural Center in Tagbilaran City on Thursday noon.

Aumentado took his oath before Supreme Court Associate Justice Henri Jean Paul B. Inting, who traces his roots to Bohol.

The former three-term congressman’s assumption of office marked the start of the second Aumentado administration, 12 years after his father and namesake Erico was provincial chief executive from 2001 to 2010.

Auementado was accompanied on stage by his wife Second District Rep. Vanessa and their children, his mother Greenie, former Cabinet Sec. Leoncio Evasco, Jr., and other family members and friends.

His running-mate, Victor Balite was also sworn into office as the province’s vice governor. Like Aumemtado, he also followed the footsteps of his father Dioniso, who was the province’s second highest ranking official from 2016 to 2019.

Rep. Edgar Chatto of the first district, Vanessa of the second district and Rep. Alexie Tutor of the third district separately took oath during the event.

Members of the Provincial Board were also sworn into office individually.

Aumentado, who delivered his speech in a mix of Cebuano and English, said his assumption of office marked the return of a “true Boholano” as governor.

His statement was apparent allusion to former governor Art Yap who traces his roots to Sulu and was raised in Pasig City.

Aumentado won by a landside in the May 9 polls against Yap, who was in his first term as governor.

The governor vowed to serve not only the 469,736 who voted for him but all 1.4 million Boholanos in the island.

“As you have chosen me to lead you. I call on you to stand and walk with me as we carry out this mission which is made arduous and more daunting with the COVID-19 pandemic still gripping the whole world and our own province still rising up from the havoc of typhoon Odette. So let us roll back our sleeves and get to work,” he said.