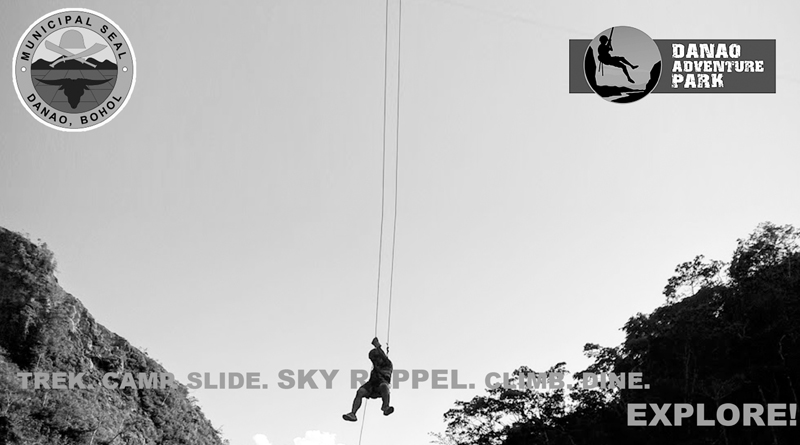 We were down but we were never out, according to Danao Mayor Natividad Gonzaga while admitting that the devastating earthquake that hit Boholtwo years ago got them on their knees.

Severely affected is the town operated Extreme Adventure Tourism in Danao (EAT-Danao)Â  Complex that its biggest grosser, the Plunge toppled off its promontory, and denying the town its multi-million income from this tourism revenue alone .

Said to the one only one in Asia, and next only to Nepal and New Zealand, Danaoâ€™s Plunge is basically a canyon swing, which was easily identified considering the presence of deep gorges and canyons at the tourism identified park.

Situated at the mountain fastness of Barangay Magtangtang, notably where a local hero put up his base of operations,Â “EAT Danao”Â has the perfect combination of soaring limestone cliffs, thick forests and tricky passageways that can discourage the weak of heart.

Seeing the potential for extreme adventure tourism and with a historical tales of Dagohoy lending credibility to the extreme activities at the park, then Mayor Thomas Louis Gonzaga gambled on the park.

Himself an extreme sports enthusiast, Gonzaga installed an activity, which will later claim asÂ Asiaâ€™s longest zipline title. The Suislide is a two way zipline that would have the activity enthusiast zipping over 200 meters of river gorges in breakneck speeds. He also put up rappelling, camp activities, rock wall challenges, spelunking, cable car rivdes and river trekking activities for tourists. Few years later, the town also put up the canyon swing, which they baptized as the Plunge.

The biggest hit however was the Plunge, admits former tourism and information officer Ana Loinda Salu-an.

This success however was short -lived. When the earthquake happened, we lost the plunge but we only had to declare two days of inspection of the facilityâ€™s safety mechanisms.

When we conducted assessments, rumors spread that we did close and isnâ€™t operational again, confesses Mayor Gonzaga, in a chance interview.

The bad road networks also played against us, joins in former town leader Jose Cepedoza, who explained that the earthquake, whose epicenter was located a few kilometers from the park caused landslides and ruined concrete roads, further discouraging tourists from getting in.

After day 3, we assessed and learned that we can continue with other outdoor activities other than the Plunge, Mayor Gonzaga said.

We were down but we stood up, officials said, while simultaneously developing its Sky Rappel to allow tourists to descend from a cable car to Inabanga River almost 200 meters below.

At the time ofÂ  the interview, Mayor Gonzaga said they are coming up with more activities,Â  to regain the lost tourists.

EAT Danao opens up its spelunking to 26 people in two batches, board games, rock wall, zipline and other kiddie skills.Â (RAC/PIA-7/Bohol)Â Â