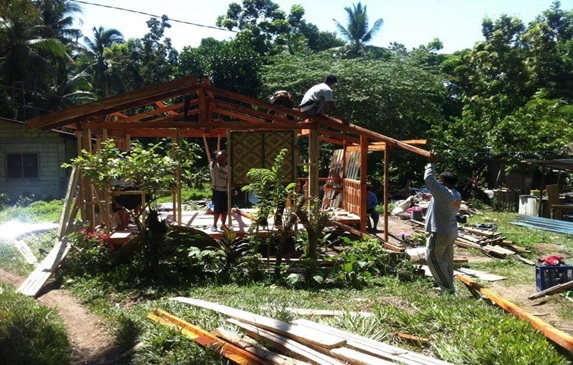 Victorio Galiguer, barangay captain of Tubod Monte, Jagna, Bohol, recalls how his father, Rufiniano, once had the passion to help others especially by building homes for the homeless. If Rufiniano had not been diagnosed with diabetes, he would have added more houses to the fourteen he had built in barangay Tubod Monte. But on a constructive note, his diabetes paved way to inspiring more people in following his passion of serving the poor.

It was in 2011 when Victorio requested for a blessing for his father’s condition from Most Rev. Alberto Uy, DD., then parish priest of Jagna, that a miracle happened. It didn’t cure his diabetes but it treated another illness in the town of Jagna- the homelessness of the Jagnaanons.

After visiting the Galiguers in Tubod Monte, Bishop Uy was inspired by Rufiniano’s story and in that very moment, he asked Rufiniano to support him in continuing his works of building homes for the homeless. It was then that both parties agreed to create a cluster which Bishop Uy initially called Balay sa Kabos gikan sa Diyos.

Bishop Uy was able to gather volunteers by informing the residents of Jagna about Balay sa Kabos after every Sunday mass.

Through combined efforts of Bishop Uy and the Jagnaanons, Balay sa Kabos was able to build its first home in barangay Bunga Ilaya on September 2011. The first recipient was the family of Lucia Tipactipac, an old widow who lived with her daughter. The first few volunteers of Balay sa Kabos found out how Tipactipac’s family had to open umbrellas to cover themselves during rainy seasons because they didn’t have a ceiling. After knowing such, Bishop Uy and the volunteers had decided to build the first house for Tipactipac.

Though Tipactipac had already passed away, the first Balay sa Kabos home is still standing strong after more than five years from its construction.

Bishop Uy had the opportunity to introduce Balay sa Kabos to a different crowd when he was the speaker for the Filipino-Chinese Chamber of Commerce in 2015. In that setting, he was able to generate PhP 1.2 Million. From then on, he, together with the Galiguers and volunteers from Jagna, decided to officially make it a foundation.

BSKFI’s source of funds largely come from the donations of the residents of Jagna. “Aside from the people of Jagna, we have Facebook friends who have given us financial assistance. We have a page under the name ‘Balay sa Kabos Foundation Inc.’ It is where we post pictures of our housing project activities. By doing so, we have attracted generous donors and supporters. We also tried doing garage sale fund-raising campaign,” Bishop Uy emailed.

Today, BSKFI has branched out to different towns of Bohol including Duero, Guindulman, Sierra Bullones, Talibon, and Bien Unido. Now that Bishop Uy is assigned in Tagbilaran City, BSKFI hopes to spread to the western parts of Bohol and set as a good example to fellow Boholanos.

Attesting how BSKFI is different from other organizations, Galiguer pointed out how he sees most poor people having the tendency to bow down to rich people thinking they’re the only ones who could help overcome poverty but BSKFI rejects this idea. “Sa balay sa kabos, gi-prove nga ang mga pobre makatabang diay pud sa mga pobre (Blalay sa Kabos proves that the poor can also help the poor),” Galiguer said.

The atmosphere in Barangay Tejero was as bright as the Saturday morning when volunteers gather for the construction of the Acerons’ home. A group of men were already building the framework of the house. Another group had prepared the materials needed for its structure. A group of women had already started cooking food for their lunch.

Olivia Acaso, Virginia Acierda, and Reme Ednalgan were three of the cooks assigned on that day. Every Saturday, they volunteer in Balay sa Kabos as food preparers. Acaso says it is already a Saturday tradition that the three of them cook for their fellow volunteers. “Lami man pud nang makatabang ta’s pareha namo nga galisod, malipay pud ta (It’s great knowing we’re able to help the people who also need help like us),” said Acaso.