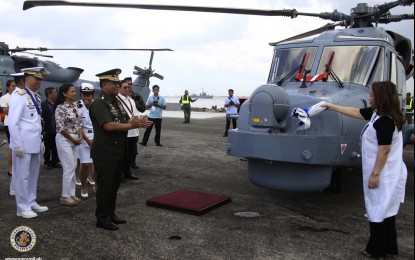 “The two AW-159s are purposely built for anti-submarine warfare. Being the latest and most advanced ASW capable platform of the PN, pilots, crew and even commanders will be undergoing extensive training to better prepare the command in properly operating and maintaining this weapon system,” Navy spokesperson, Capt. Jonathan Zata, said in a message to the Philippine News Agency (PNA) when asked what is next for the Navy after the formal commissioning of the AW-159s last June 17.

Zata said the two “Wildcat” helicopters will be deployed aboard the two Jose Rizal-class missile frigates being constructed by South Korean shipbuilder Hyundai Heavy Industries and scheduled for delivery in 2020.

The AW-159s arrived in the country last May 7 and were acquired for PHP5.4 billion, including its munition, mission essential equipment, and integrated logistic support.

The AW-159, previously called the Future Lynx and Lynx Wildcat, is an improved version of the Westland Super Lynx military helicopter.

The helicopter has been ordered for the Royal Navy and British Army. It is capable of speeds of 291 km per hour, has a range of 777 km, a ferry range of 963 km, and an endurance of one-and-a-half hours (four hours and 30 minutes if fitted with auxiliary fuel tanks).

The AW-159s can also be armed with rockets, machine guns, missiles, torpedoes, and depth charges and fitted with modern sonar systems for tracking down submarines. (PNA)