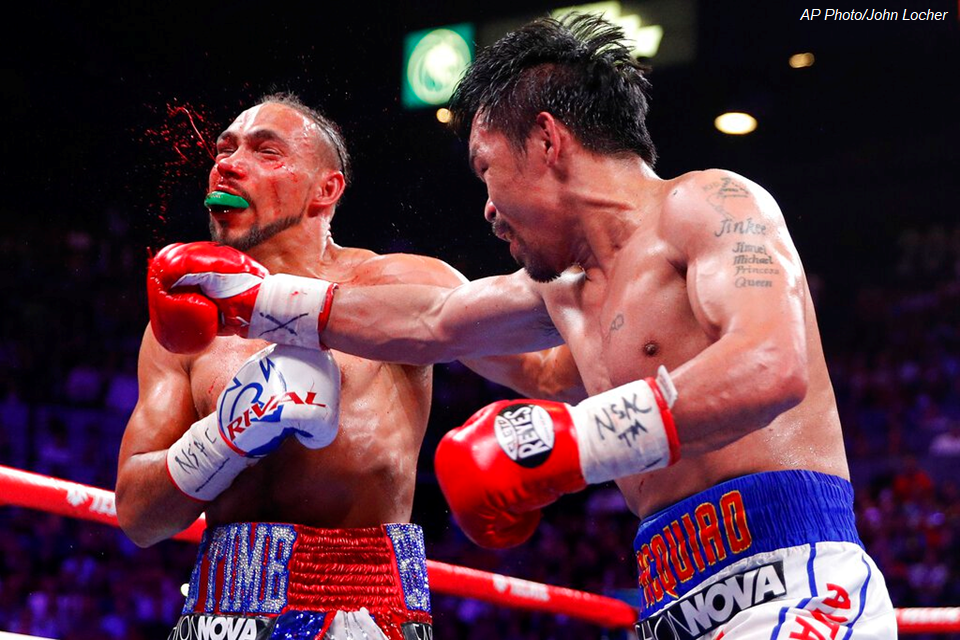 MANILA – The 40-year-old boxing legend, Manny “Pacman” Pacquiao, has proven that indeed, life begins at 40 when he beat his 30-year opponent, Keith Thurman, in a grueling 12-round bout for the World Boxing Association (WBA) super welterweight belt at the MGM Grand Arena in Las Vegas on Sunday.

Weeks before the fight, Thurman said he would not only crush the eight-division boxing champion Pacquiao, but force him to retire from boxing.

Pacquiao was unnerved and brushed aside Thurman’s boasting. He just smiled and said he would prove his mettle in the ring.

The Filipino boxing champ proved his worth when he dealt Thurman his first loss in 30 fights with a 12-round split decision.

At the opening bell, Thurman swarmed on Pacquiao but the veteran Filipino fighter countered with a flurry of punches and caught his taller opponent with a wicked right and the American boxer went down for a count of eight.

It was a stunner for Thurman as he was anticipating that he would knock out Pacquiao in the first three rounds. It did not happen though.

With only his second knockdown in his career, Thurman realized that the Filipino champ was not a pushover at age 40, but still packed mighty punches like a 25-year-old boxer.

“He was fast, he was strong. The short steps, he has a lot of it. I felt like I will give him a pressing fight. I felt he’s getting tired in the later rounds, but he’s been to so many wars (that) he knows to use his defense a little better,” Thurman said in a post-fight conference.

On the fifth round, Pacquiao caught Thurman with another hard right that almost blew out Thurman’s mouth piece.

Thurman tried to overpower Pacquiao in the middle of their 12-rounder, landing several hard punches, but the veteran Pacman survived with his ring savvy, and countered with a series of heavy shots of his own until the bell rang at Round 12.

With his victory over Thurman, the much-awaited rematch with former undefeated world welterweight champion Floyd Mayweather is possible as Pacquiao continues to parry retirement.

“I can still fight. I can give a good fight. I can entertain the fans. I believe I am here to inspire the people through boxing,” Pacquiao told the media after his 62nd win in 71 fights.

Pacquiao did not only train hard for this fight, but prayed for spiritual protection and guidance as he always does in his daily task, putting God first in his life. This made the big difference in his success as a legend in the history of boxing each and every Filipino would be proud of. (PNA)