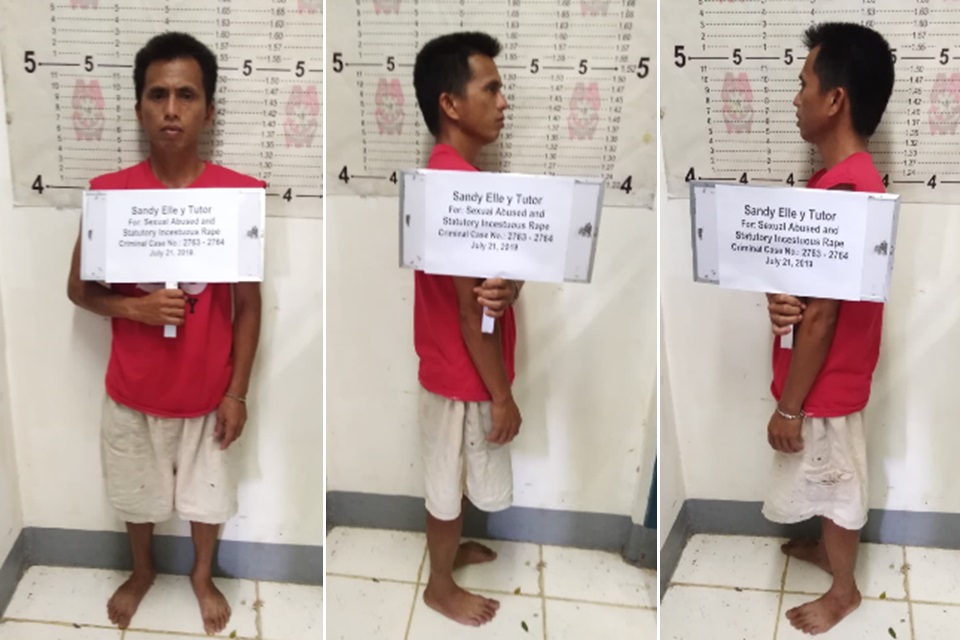 A 39-year-old man wanted for allegedly raping his nine-year-old daughter was arrested by police in Mabini on Sunday.

The arrest came three years after the alleged rape incident in 2016 as the victim’s family only found out about it in November, 2018 and charges were filed in the same month, said Staff Sgt. Josephine Russell of the Mabini Police Station’s Women’s and Children’s Protection Desk.

According to Russell, suspect Sandy Elle was apprehended in Barangay Poblacion II in Mabini through an arrest warrant issued by Judge Jennifer Chavez-Marcos of the Regional Trial Court Branch 47 in Carmen after he was spotted by police informants.

Elle who is facing charges for sexual abuse and statutory incestuous rape is scheduled to be arraigned in Carmen and is set to be recommended for detention at the Ubay District Jail pending his trial.

The Bohol Prosecutor’s Office has recommended no bail for Elle.

Russell said that the victim’s family found out about the alleged rape incident when the victim suddenly fainted and was later hysterical at school. This immediately aroused suspicion from the victim’s grandmother that she may have been abused, considering that Elle was previously accused of sexually abusing another one of her grandchildren.

Russell said that the victim’s older sister, also a minor, was sexually abused by her father in the past.

The victim shared her account of the incident to her family and to the authorities who immediately brought her to the Governor Celestino Gallares Memorial Hospital in Tagbilaran City for a medical examination on November 3.

Charges were filed before the prosecutor on November 16. Elle still attended the preliminary investigation but later went into hiding prompting the court to issue the arrest warrant on July 9, 2019.

Meanwhile, authorities have yet to file a charge against Elle for the alleged repeated sexual abuse against her other daughter who has refused to give a statement regarding the incidents.