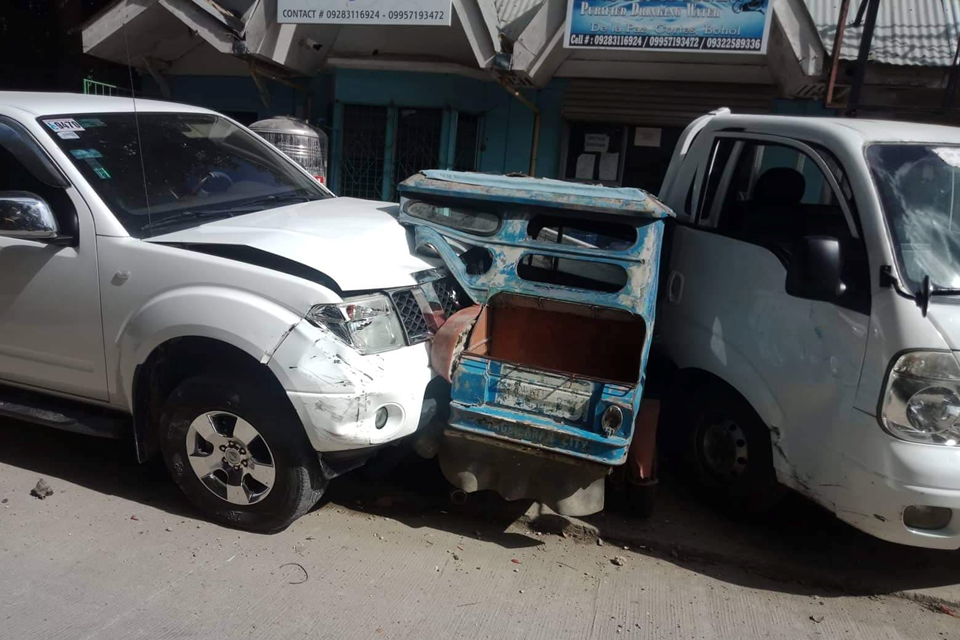 Four people were injured after a pickup truck plowed six vehicles and one bystander along a national road near the Tagbilaran-Cortes border in Barangay Dela Paz, Cortes at past 1 p.m. on Wednesday.

According to Senior Master Sgt. Roel Duetes of the Cortes Police Station, the Nisan Navara which was travelling towards Tagbilaran City first rammed two motorcycles in front of it before swerving to its left and hitting a bystander and four other vehicles which were parked roadside.

Kiano Namor and brother Kenrex Namor who were on board one motorcycle, Ronel Namoc on another motorcycle and Larynet Salazar, a water refilling station attendant who was standing roadside, were taken to hospitals in Tagbilaran City after they were hit by the pickup truck.

Police have yet to determine the condition of the injured victims, but Duetes noted that they were all conscious when rescuers arrived.

The parked vehicles which were hit by the pickup truck included a Suzuki motorcycle, a Honda Civic, a Bongo pickup truck and a tricycle. The vehicles were empty during the collision.

Duetes said that the pickup truck’s driver, Israel Larido, 31, of Loon admitted that he fell asleep behind the wheel.

Larido who explained that he lacked sleep as he was attending to his sick child who was admitted at a hospital the night before the incident has met with the victims at the hospitals to arrange a settlement.

Duetes said that Larido vowed to pay for the medical expenses of those injured. (A. Doydora)

Lightning kills 2, injures 1 other in Danao

Man, 67, dies after rammed by truck in Dauis

NOTE: This story was first published in The Bohol Chronicle’s Sunday print edition. Authorities on Friday found the lifeless body…

Boy, 17, dies after motorcycle swept by flood in Jagna

A 17-year-old boy drowned after his motorcycle was swept by floodwater along a road in Jagna at dawn on Wednesday.…