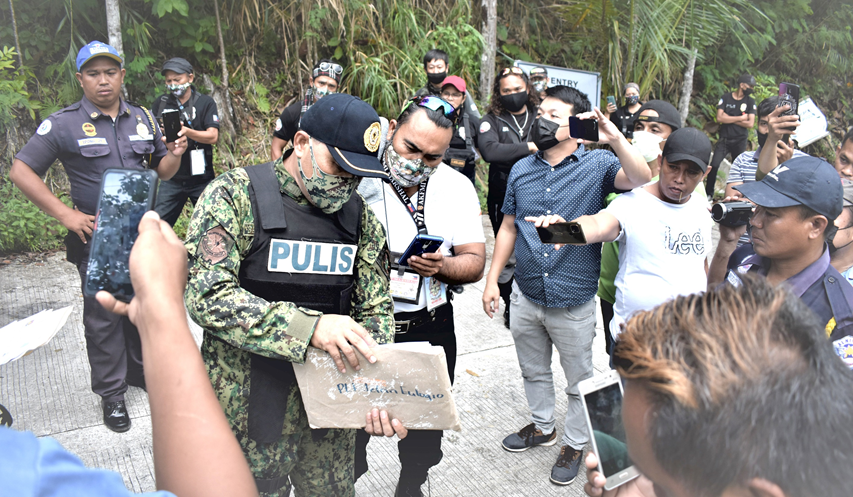 After months of protracted and contentious negotiations over the “beneficial use” of water sourced from Bugwak Spring located in Purok 6, Barangay Magsaysay, Sevilla, the Local Government Unit (LGU) of Balilihan conducted a road clearing operation dismantling alleged roadblocks erected by private water distributor Richli Corporation, a Boholano-owned corporation on a stretch of a disputed barangay road in Barangay Sto. Nino, Balilihan.

A face-off between Mayor Pureza Chatto and Richli President Richard Lim right on the disputed site Saturday morning failed to settle the main conflicting issues but apparently cemented their differences into the legal arena and the compelling necessity to pursue their own separate strategies.

The disputed properties belong to the heirs of the Melecio Pajota represented by Tomasa Pajuta of Barangay Tagustusan, Balilihan.

Lim purchased several parcels of land from the Pajutas in compliance with the approval of Richli’s water permit which the National Water Resources Board (NWRB) requires proof of land ownership, legal title, right to use the property on which the water source is situated.

Chatto, along with her daughter Atty. Esther Patrisha Chatto made known to Lim, Richli Vice President Elmer Lim and Atty. Dennis Hora that based on official documents in their possession, the disputed road is a barangay road as designated by the Original Certificate of Title (OCT) technical description.

As such, the LGU will proceed with the laying of pipes leading to the Loboc River as part of the PhP90 million Centralized Bulk Water Project of Balilihan which will traverse the disputed portion of the barangay road.

Unless no complaint or case is filed before any government agency or a court, the project will push through which is now 85% accomplished, according to Atty. Chatto.

Also, the barangay road as delineated in the OCT will only extend up to another property owned by the Pajotas where the 5MVA Janopol Mini Hydro Power Plant in Barangay Sto. Nino of the Bohol Electric Cooperative (BOHECO) 1 stand.

The distance from the boundary of BOHECO1 to the Loboc River is estimated at 100 meters, according to Lim.

The LGU Balilihan has to negotiate with the Pajutas for a road right of way to access water from the Loboc river which is fed by the outflow of Bugwak Spring in Sevilla as proof of ownership of the lot with access to the water source, according to Lim.

Access or right of way to the water source is a primary requirement of the NWRB for a water permit which according to Lim, the LGU of Balilihan lacks.

Working closely with units from the Philippine National Police (PNP) Balilihan Police Station and the Provincial Mobile Force Company (PMFC), Chatto with Barangay Sto. Nino officials led the demolition of the pre-fabricated GI fence that served as the entrance to the Richli property.

The request for police assistance was approved by Deputy Regional Director for Operations (DRDO) Police Colonel Roderick Minong by the authority of Vega and forwarded to Balilihan Chief of Police (COP) Police Lieutenant Yolando Bagotchay for his appropriate action.

Served at dusk on November 25, 2021, security guards, fully taken by surprise, refused to receive the order signed by Punong Barangay, Migronio Camanzo, and noted by Chatto.

Intimidated by the presence of a sizable number of police personnel led by  Bagotchay, the private security unit of Richli Waters grudgingly gave way to the order as several tanods (barangay public safety officers) started tearing down structures of Richli Waters allegedly obstructing the passage of the disputed barangay road.

The NWRB granted a Conditional Water Permit (CWP) to Balilihan with a volume of 227.18 liters per second (LPS) on January 22, 2020, with Bugwak Spring in Barangay Magsaysay, Sevilla as its water source.

Likewise, a CWP was issued to Richli on November 18, 2020, with a volume of 894.47 LPS by the NWRB after the protest of Balilihan against Richli’s water application was dismissed on September 13, 2021. (Chito M. Visarra)