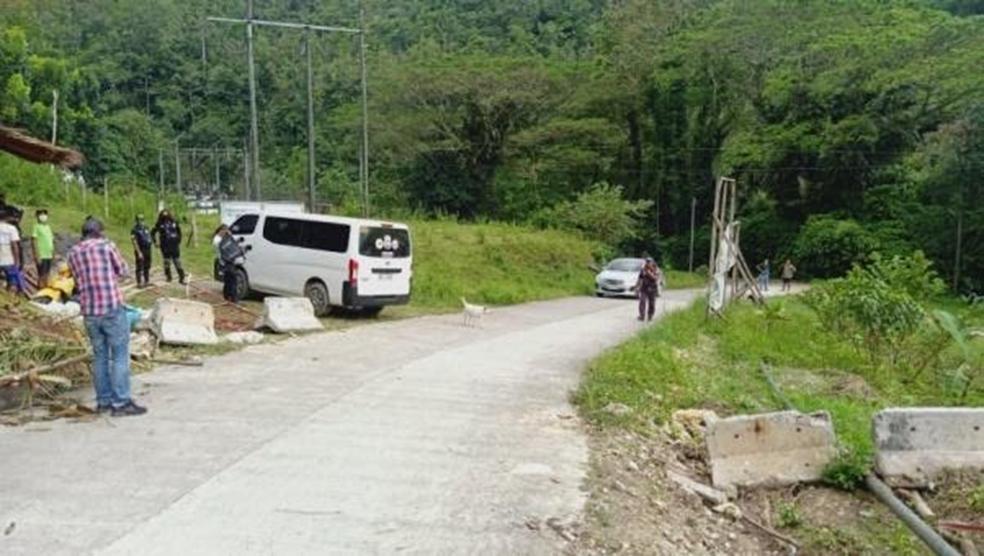 Intimidated by the sheer numbers of armed police personnel and allegedly threatened by Balilihan Mayor Pureza Chatto “who commanded me to step aside so that I will not be harmed”, Jeffrey Ipong, one of the security guards of Al Nino Security Agency assigned at the Lim property in Barangay Sto. Nino, Balilihan filed criminal and administrative complaints against the Mayor and several barangay officials before the Office of the Ombudsman (Visayas).

The complaint about Grave Coercion under the Revised Penal Code, Conduct Prejudicial to the Best Interest of the Service, Grave Misconduct and Grave Abuse of Authority was received by the Ombudsman at 11:11 AM on December 3, 2021.

Mayor Chatto when requested by the Chronicle to respond to Ipong’s allegations said “Video footages will belie the allegations of the security guard, while recordings from the police with their body cams can attest to the peaceful execution of the road clearing operation with the police assistance authorized by Deputy Regional Director for Operations (DRDO) Police Colonel Roderick Minong by the authority of Vega and forwarded to Balilihan Chief of Police (COP) Police Lieutenant Yolando Bagotchay for his appropriate action.”

“I was only present as a witness to the enforcement of the order,” Chatto added.

According to his seven-page sworn complaint-affidavit, the incident took place at dusk on November 25, 2021, when a police patrol car and several vehicles parked a few meters from the security post.

A sizable number of police personnel with firearms were walking towards the gate together with Chatto, barangay officials, and Balilihan Chief of Police (COP) Police Lieutenant Yolando Bagotchay, according to Ipong.

COP Bagotchay informed Ipong that “they are assisting in serving an order for the clearing operation of the barangay road,” according to the complaint affidavit.

The order for the “demolition and removal of the metal gate obstructing the barangay road in Barangay Sto. Nino was signed by Barangay Captain Camanzo and noted by Mayor Chatto and was read in the presence of Ipong by Barangay Kagawad Arcelie Acuna.

A copy of the order obtained by the Chronicle showed no mention of the names of the respondents except a reference to Lot Nos. 23225 and 23228 and a narration of a Department of Environment and Natural Resources (DENR) of an approved 2014 cadastral survey “indicating the existence of the barangay road (10 meters in width) starting from the National Highway to the area along the banks of the Loboc River, otherwise known as Bugwak Spring.”

TAKE NO FOR AN ANSWER

According to Ipong, he refused to receive the order and explained that it should be served to his employers but despite his refusal, Barangay Kagawad Teofelo Ambojot, Jr. “strongly asserted that they will push through with the demolition”, while “Mayor Chatto also commanded me to step aside so that I will not be harmed.”

Soon after, barangay tanods led by Ambojot, Jr. “forcefully dismantled” the gate at the alleged road, entered the property, destroyed the fence and guardhouse which is clearly not obstructing the road, as alleged by Ipong.

Ipong asserted that the respondents “have no authority to destroy the gate, fence and guardhouse inside the properties of my employers” in the absence of a “court order allowing them to demolish the said properties.”

According to Ipong, the respondents acting together in conspiracy violated his right by preventing him from doing his job when they destroyed the properties of his employers that showed their failure to perform and discharge their duties with the highest degree of excellence, professionalism, intelligence, and skill.

According to sources with knowledge of the controversy involving the LGU of Balilihan and Richli Corporation, the battleground has shifted from the ground to the courts with the Ombudsman complaint filed by the water company as the first move in a planned series of legal remedies to enforce their rights and protect their PhP1 billion investment to provide clean and potable water to the Boholanos from the bountiful rivers and springs in the province. (Chito M. Visarra)