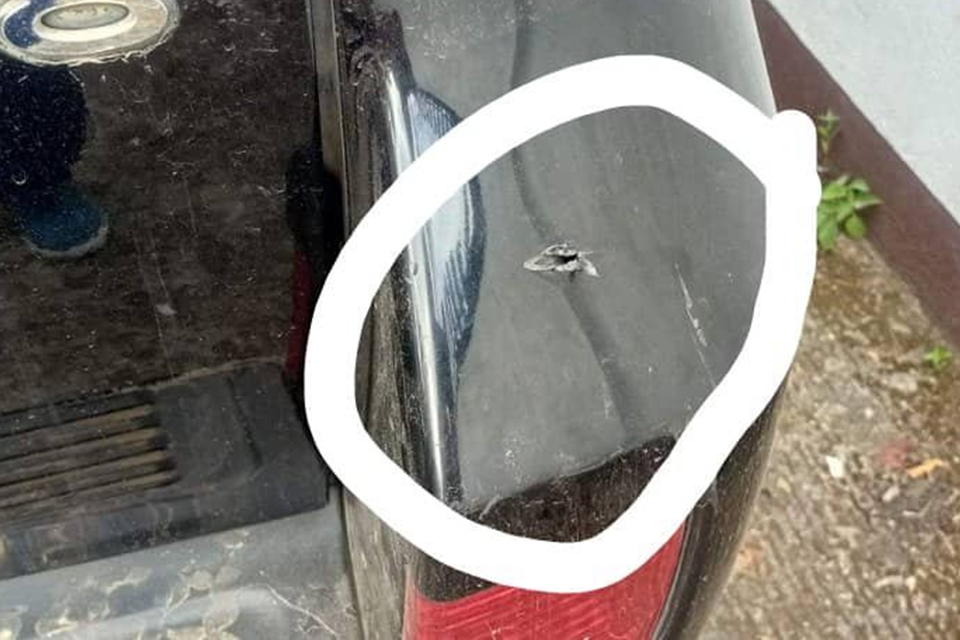 A bulletproof sports utility vehicle (SUV) owned by Conchita Toribio-Delos Reyes who is running for mayor in Carmen town was allegedly shot at a remote sitio in the town by employees of a construction firm owned by her mayoral opponent.

No one was injured but police said they were able to arrest two suspects who were allegedly involved in the shooting incident. The men were identified as Franklin Catulong and Bienvenido Patińo, both employees of Elizalde Clavite, who is running against Delos Reyes.

According to Carmen police chief Major Jesus Daplin, two vehicles owned by Delos Reyes, a bulletproof Toyota Land Cruiser and a Chevy Trailblazer with only drivers onboard were traversing a narrow barangay road in Guadalupe, Carmen when they were met by two incoming vehicles, a Ford Raptor and an unidentified vehicle at around 2 a.m. on Sunday.

Delos Reyes’ vehicles which were driven by one Jun Luayon and Vicente Buan were forced to turn around and head back.

After turning back, Luayon and Buan were met by two other vehicles, an Isuzu MU-X and a Toyota Hilux while the Raptor and other vehicle trailed behind them.

Buan and Luayon were pinned down when the gunmen allegedly started shooting at the rear end of Delos Reyes’ Land Cruiser where both drivers hid and were able to call the police.

Police who responded to the distress call found both Delos’ Reyes vehicles and the Hilux and MU-X.

However, Daplin said they were unable to find the Ford Raptor and the unidentified vehicle upon arriving at the scene.

Police then allegedly found Catulong and Patińo inside the MU-X where police also recovered a .45 caliber pistol which was loaded with six live rounds.

They also recovered a spent shell near the MU-X.

He added that police found only three bullet holes in the Land Cruiser’s rear bumper.

For his part, Clavite admitted to owning the MU-X and Hilux but denied ownership of the Raptor and other vehicle.

He also admitted that both men who were arrested were his employees.

According to Clavite, he did not give out any orders to carry out an ambush on Delos Reyes’ convoy.

He said has yet to get a clear narrative of the incident. (A. Doydora)