The abandonment of a newborn baby and abortion of a fully formed fetus are “tantamount to murder,” a ranking Catholic cleric said Thursday.

Paña issued the statement over station DYRD’s “Inyong Alagad” program after a newborn baby boy was found abandoned inside a trash bin at the Jagna Public Market.

Photos and videos of the baby spread over social media on Wednesday, alarming netizens in the predominantly Catholic province which is known for its residents’ religiosity.

The Church official said the diocese laments the incident. He also expressed concern that abortion is becoming rampant and is already being legalized in other countries.

Paña reminded the Catholic faithful that abortion is still considered a “mortal sin.”

Paña highlighted the need to educate the Catholic faithful on when a life of a human being starts based on the standpoint of the Church.

On Thursday, authorities buried the newborn baby who was found covered in blood and wrapped in an eco-bag at a restroom inside the Jagna Public Market.

The baby who was still alive when discovered by a market caretaker was rushed to a hospital but was declared dead on arrival.

NOTE: THIS STORY WAS FIRST PUBLISHED IN THE BOHOL CHRONICLE’S SUNDAY PRINT EDITION. Apostolic Nuncio to the Philippines, Most Rev.… 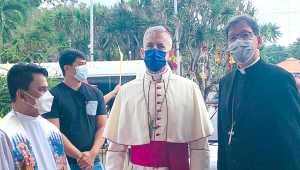