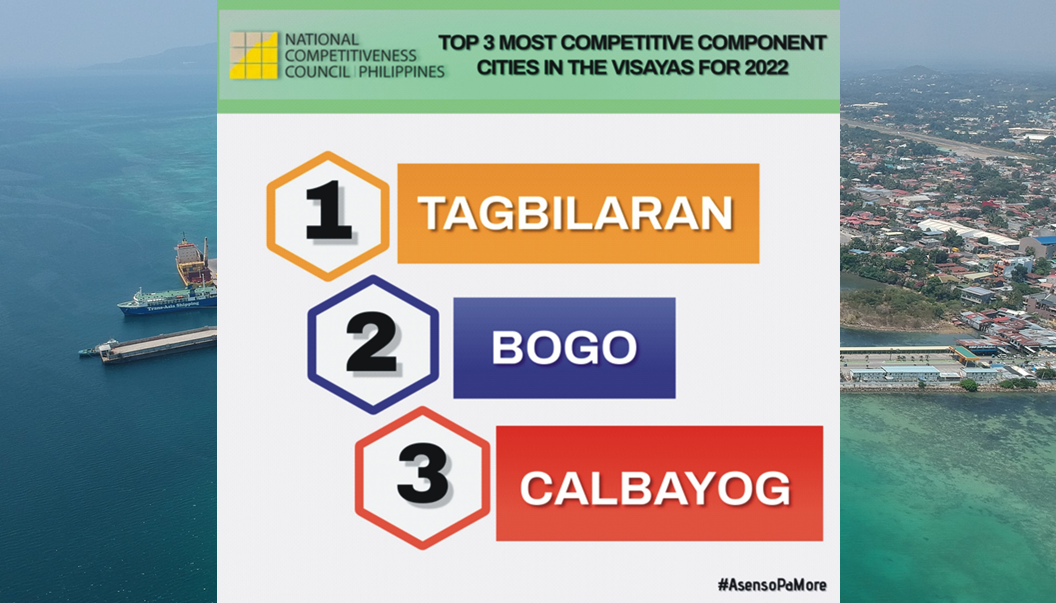 City Mayor Jane Yap thanked all the department heads for their hard work and dedication, “This achievement is the result of the collective efforts of the City Government. The sound fiscal management of the city has also been a game-changer for Tagbilaran City. The local executive thanked the National Competitiveness Council (NCC) and said this recognition is a testament to the focus and commitment of the City Government to deliver relevant public service”, Mayor Jane said.

USAID CHANGE (Cities for Enhanced Governance and Engagement) project through its coordinator, Dr. Linda Paredes helped organized the Data Capture and Monitoring Team of Tagbilaran City. This composite team is responsible for research, monitoring, and data-gathering. The team was tasked to collect information for the indicators under the four pillars. Jeanette Busano of the City Planning and Development Office served as the overall coordinator of the data-gathering and monitoring, in close coordination with Jude Guieb of the Department of Trade and Industry.  The Economic Dynamism data was provided by Mary Christine Bitoy and Hubert Inas from the City Treasurer’s Office, Marysol Perocho from the City Budget, and Shayne Beniga from the Human Resources Department, the Government Efficiency Pillar data was furnished by Gilda Maniwang from the City Economic Enterprise, as assisted by Fe Almine from the City Assessor, Mario Lloyd Gutierrez from the Sangguniang Panlungsod, and Junicel Mancha and Artemio Alo from the City DepEd, the Infrastructure Pillar was handled by City Engineer Teodoro Estoque, as assisted by Asuncion Epe and Engr. Gina Inting, and Hazel Dos Pueblos from the City Tourism. Lastly, the Resiliency Pillar was under Airah Balatayo from the City Disaster Risk Reduction and Management Office (CDRRMO). The data in the newest addition, the Innovation Pillar, was furnished by DTI and IPOPHIL (Intellectual Property Office of the Philippines).

The National Competitiveness Council was organized through Executive Order No. 44 which aims to promote a more competitive Philippines and instill a culture of excellence, through public-private sector collaboration as means to reduce poverty through inclusive growth.

Cities and municipalities are ranked on their competitiveness based on an overall competitiveness score. Scores are determined by the values of the actual data, as well as the completeness of the submitted data submitted by local government units.