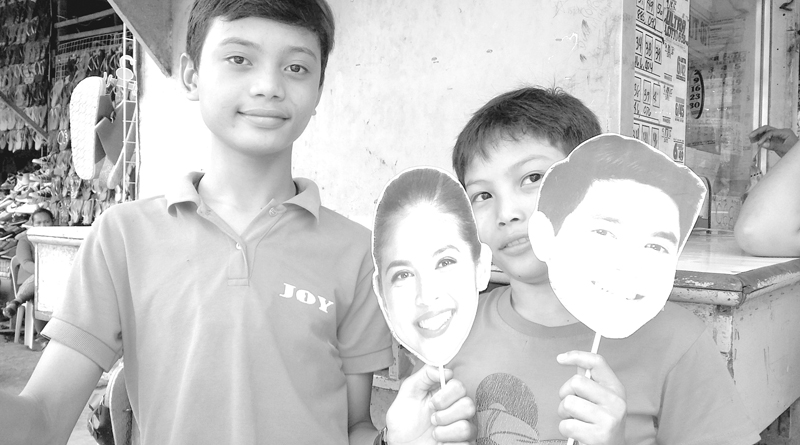 Like millions of Filipinos around the world, we are also crazy about AlDub and Pastillas Girl.

AlDub is the dailyÂ kalyeseryeÂ romance portion involving split-screen lovers Alden Richards and Maine Mendoza as Yaya Dub. Its â€œlove from a distanceâ€ tale has captured the hearts of the viewers, including yours truly, who was bitten by Eat Bulagaâ€™s AlDub bug two month ago.

Then, amid Eat Bulagaâ€™s surging ratings owing to AlDubâ€™s success, the rival showÂ Itâ€™s Showtime came up with its ownÂ kiligseryeÂ featuring Angelica Yap, who was known online for her viral video of â€œbitterâ€ pastillas recipe. She first appeared in the show asking Vice Gandaâ€™s alter ego Madame Vertud for advice on how to move on after she was ditched by her boyfriend for her best friend.

Analyn Pollenza-Arbilo and her colleagues at the Philippine Port Authority unabashedly showed howÂ gigilÂ they were about the AlDub love team. All eyes are glued on Eat Bulagaâ€™sÂ kalyeserye.

Student and peanut vendor Roniel Villanueva shared he is an AlDub fan, while his sister Renelyn is a fan of Pastillas Girl.

â€œI rarely watch them pero Iâ€™ll choose Pastillas because it is a hard process of fixing and closing your pasts relationship and past issues before opening your heart for the next chapter of lovelife,â€ said Ferome Almine.

â€œAlDub because I found it funnier compared to Pastillas,â€ said Hazel Panlita. â€œIâ€™m not being judgemental but you canâ€™t pick good lessons with them, compared to AlDub show, Lola Nidora has lessons to ponder.â€ She also said Pastillas is boring, and the big difference is Yaya Dub keeps on making her face ugly during kalyeserye. â€œBut the uglier she pretends the more beautiful she glows, unlike pastillas, she keeps on pa-cute but …. HeHeHe never mind,, but she is pretty naman but Maine is by choice.â€

US-based socialite Mikey Gatal confessed he is an Aldub fan. â€œI am AlDub and Yayadub forever.â€ Â He said AlDub is an effective stress reliever. â€œLet’s put it this way, AlDub fever shares a unique sense of humor and at the same time it reminds us of ourselves and gives moral lesson.â€

â€œNone of the two,â€ said Fiel Angeli Araoarao-Gabin.Â  She said she was curious on Pastillas Girl and AlDub. â€œThe (funny, crazy or utterly annoying) things that media moguls do to pull the ratings.â€

If ever he decided to run in 2016, Clarin Mayor Allen Ray Piezas toldÂ VRSÂ last Wednesday that he would seek re-election for Mayor.

â€œIf gusto sa mga tawo, I am open for my last term,â€ said Mayor Piezas who steels the wheels of Clarinâ€™s development.

Incidentally, Clarin will celebrate the feast of St. Michael on Sept. 29. Visitors and guests will be impressed in the townâ€™s physical landscape. One noticeable structure that greets the eyes is the two-storey public market which was built in 1988 and was partially damaged by the Bohol earthquake in 2013.

On the other hand, Doxson Asoy is planning to run for mayor in San Isidro town. On Facebook, he said he will definitely run for Mayor.

â€œBut I still have to finalize it,â€ explained the former Bohol SK federated president of Bohol and ABC president. His wife, Karen, will support whatever decision he will make.

James Tripoli of the office of Tubigon Mayor Marlon Amila is running in 2016 as persistent reports have been mentioning him as on the short list of administration bet Amilaâ€™s councilor. James said he has to think whether to file his Certificate of Candidacy (COC) for councilor in October.

Barely two weeks from now, we will know who will be running in the May 2016 elections.