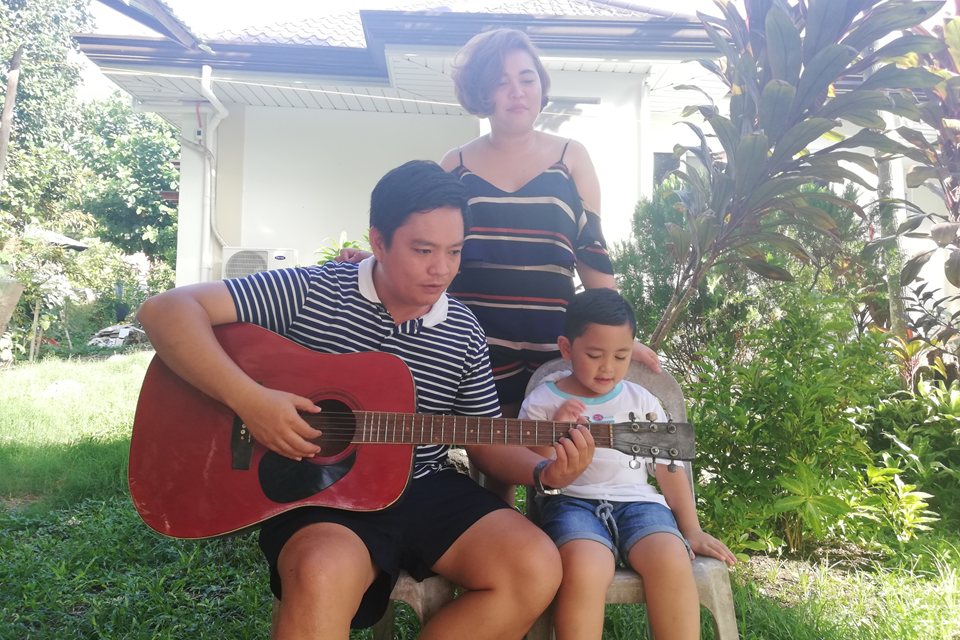 I’ve not seen Czed Miguel “Miggy” Ebojo, the ‘Wonder Kid of Bohol’ for almost three weeks after his story was aired on GMA’s 24 Oras.

It took me three days to finish the story about Miggy because a day was not enough to observe a child   whose intellect and independence of spirit simply aren’t ordinary.

The other day, Clyde, Miggy’s father, told me the genius boy is doing fine.

Miggy has completed tests that show his IQ as very superior.

“We started to realize he was different at two years old. He learned a lot of things as a two year old far from normal compared to another children at his age group,” said 31 year-old Clyde, also a musician.

That’s when his parents said Miggy started using words, like the names of shapes, colors and numbers.

Then, Miggy could write and read words at age 2.

At 3 years old, when typical kids have about a dozen words in their vocabulary, Miggy could sing the ABCs –and well sing it backward, too.

He knows about the solar system, the planets and how many moons does each planet has. He knows Pluto was the 12th planet until 2006.

When asked who created the universe, Miggy just said, “Jesus! He does. There’s no other God, no god other. Only one.”

Miggy can count in English, Chinese, Japanese and Russian from 1-100. He can multiply in Spanish.  He knows the how many chapters of the books in the Holy Bible.

Miggy also knows on what day your birthday falls from 2019 until the year 2030. Plus, he also knows the composition of a planet and how many moons does each planet has.

According to his parents, no one taught Miggy all these things.

“I am worried about Miggy’s abilities as parents. I really don’t have idea how to raise a child like him,” said Marjorie, 28, who began searching for resources to help with his rapid development.

She said she is afraid other people may not understand her son’s ways.

They also went to see a Bohol-based clinical psychologist Dr. Kit Balane to evaluate Miggy’s sky-high IQ. It turned out that Miggy’s IQ is upper extreme or genius.

“Miggy is fours year old but his IQ is in the upper extreme. It’s safe to say Miggy is a gifted child as far as his IQ is concerned,” said Balane.

“He has the potential to learn fast, to process information quickly, and correctly as far as Miggy’s intelligence concerned,” he added.

Balane encouraged the parents to nurture the learning potential of Miggy.

“It is very important that Miggy is provided enforcement at home other than what he gets at school. Parents can provide time, creative materials, reading materials but also not forgetting the social emotional needs of the child,” said Balane who established the only clinic in Bohol for a decade.

It is also important that Miggy should be in school that has understood his particular creativity since bright kids process so rapidly that by midday they can be mentally burnt-out and hard to teach.

“As a parent, I’m really proud of my son,” his father said. “I’m super-excited he has this gift.”

But his gifted intelligence doesn’t mean Miggy isn’t still like any other four-year-old kid.

When he grows up, Miggy said he wants to be a doctor.

His favorite day is Saturday because it is his cellphone and TV day. Math is his most favourite subject.

Clyde and Marjorie said they just want their son to have a normal childhood, gifts and all.

“We are proud of our little boy what he is now and what he will become in the future,” said Marjorie.

Clyde said it’s not really intelligence that does matter in this world but how his son will deal with different walks of life.

“We are teaching him how to become a good person. It’s not our priority to make him more intelligent. What we hope for and we  love to see  about him is that he will impact the community and he will grow with so much love as we teach him every day,” Clyde said.