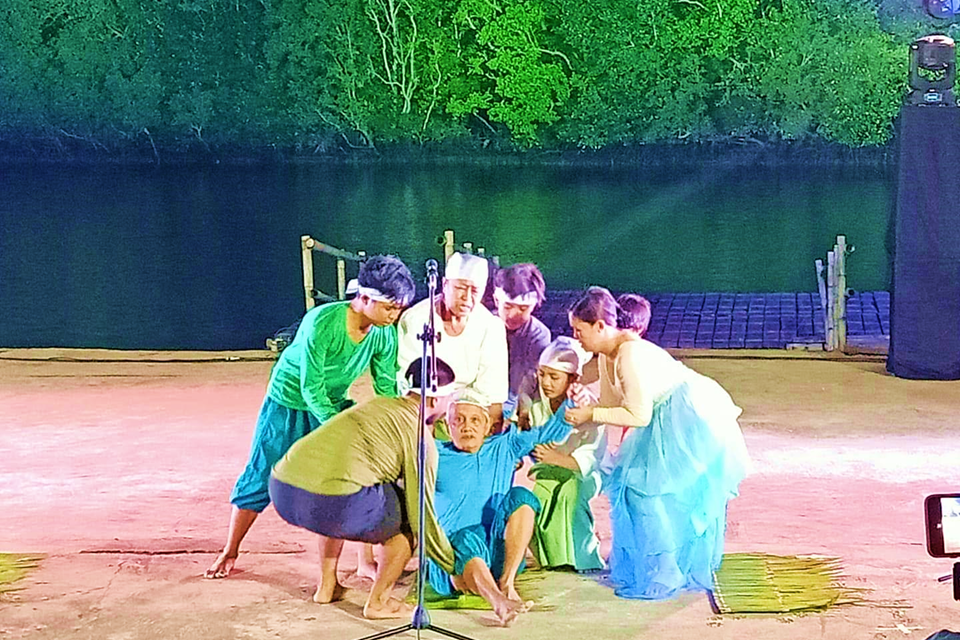 Home to a very diverse flora and fauna ecosystem, the majestic and historic Abatan River will be the setting of Hudyaka Sa Abatan 2019. Hudyaka, which literally means festivity, aptly refers to the celebration of the pride of place and the creative genius of the local communities residing in the towns along the beautiful river. It is a showcase of cultural performance products, which the towns of Antequera, Balilihan, Catigbian, Maribojoc, Cortes and Loon developed in the last two years to expand and enhance the development of local community-based creative industries.

Each of the five towns, in a spirit of communal sharing, will portray in various creative modes or aspects of their local history, culture, lifeways, struggles, and visions. The show is curated and directed by NCCA Consultant for the Visayas Gardy Labad.

It will commence with Pangalay, a classic Philippine dance ritual from Mindanao which must have been popular in the entire islands before the coming of the Spaniards. Its characteristic hand and foot movement patterns suggest the rhythm and texture, the sights and sounds of the marine environment of the country and its usage has been described as functional for both secular and spiritual purposes, such as cleansing the environs before any important activity. The piece has been taught to the Maribojoc Cultural Collective by Ramon Magsaysay Heritage Awardee for the preservation of the Pangalay, Ligaya Amilbangsa and will be interpreted during the show by Maribojoc-Artist-Leader Gerardo Calle Jr.

Panginabuhi sa Suba sa Abatan will be presented by the Lincod Cultural Collective of Maribojoc. The lifeways and struggles of fishermen and nipa growers in the Abatan River are distilled in this short drama improvisational and dance devising piece. Belonging to their mother organization ALIMANGO, the collective is one of major cultural groups that live off the waters but also are their major protectors.

The Dorol Elementary School Flute and Guitar Ensemble from the town of Balilihan will then feature Mga Huni sa Kasadya. It portrays the Boholanos’ love for music even during childhood. It is the commitment of the townspeople of Balilihan to instill in their children and youth a love and appreciation of Boholano cultural heritage which is present in the historic town.

Suwaki sa Kainggit by Loon poet-artist Jude Henrick Dospueblos introduces ‘balak’ (Visayan word for “poem”) to the audience as a major cultural heritage asset of the Visayan people. Its inundating rhythm and colorful language, sensuous and animated imagery, its play of rhymes and wit are all indicative of the charm, intelligence, and creativity of the local Boholano. Made popular all the more by the Boholano President Carlos P. Garcia, its legacy is kept alive in one literary capital of Bohol, the municipality of Loon. In this rendition, poet JH brings us to the savors, symbology, and nuances of the sea urchin, the “Suwaki”, found abundant in the waters of Kainggit Beach of Tagbilaran.

The Antequera Cultural Collective follows with Dalit sa Kahanas, a created festival basket dance affirming the town as Bohol’s prime basket capital known for the variety and craftsmanship of this hand-woven product. The members of the collective, aside from having in their repertoire a musical on the Boholano hero Tamblot, have devised a dance celebrating the artistic vitality, cultural virtuosity, and vibrant spirit of the Antequeranons.

Kasing Sining Teatro Bol-anon Ensemble’s version of Usahay, one of the most- liked Cebuano love songs is given modernist interpretation by Bohol’s premier drama and dance repertory company. Having been trained in the wide vocabulary of the art, from ballet to jazz, from indigenous to contemporary to martial arts, this version is an attempt to create a new fusion of sentiments and movement, of body and emotion, of the physical and the aesthetic.

The show’s centerpiece Wadji – Ang Diwatang Bayani sa Suba sa Abatan will be mounted by the Cortes Cultural Collective. The context is Pre-Hispanic Bohol circa 1500s. The island is prey to marauding pirates that pillage coastal populations for the annual slave trades and raids. According to local oral tradition, one such community is that of the Abatan river headed by Datu Mag-ili and his lady the Princess Wadji. When the fleet of Magellan arrives in Cebu in its attempt to vanquish the local chiefdoms, Mag-ili is summoned to join the battle of Lapu-lapu against the Conquistador. Unfortunately, he is killed together with most of his Abatan warriors. Grief engulfs the town but to save its survival, Princess Wadji responds to the situation by organizing the defense of the community against the invading pirates and marshalling courage to pull her town from the bootstraps of despair and fear. In one such fatal attack, the spirit of her brave husband appears and propels her to continue the war to victory. She is now hailed as the goddess and protectress of the Abatan environment. The piece is based on a scenario written by Cortesanon playwright Rey Chiu.

The show’s finale will be a blast of Kuradang – Ang Sayaw nga Lumad Bol-anon, Sayaw sa Kasadya ug Hudyaka. Loon is considered a major heritage town of Bohol, made resplendent by their local artistic leaders and cultural products in poetry, dance, music, drama and the visual arts. Celebrated as Hall of Fame winners in the Sandugo Festival in 2016, 2017 and 2018, especially through the barangay of Napo, Loon climaxes this night’s performance series with the energetic and dazzling rhythms and movements of the Boholano Kuradang. The audience is invited to revel in this glorious celebration of community, culture, brotherhood, and pride of place. The performance will bring the show to its highest level through the dance prowess of the Loon Cultural Ensemble.