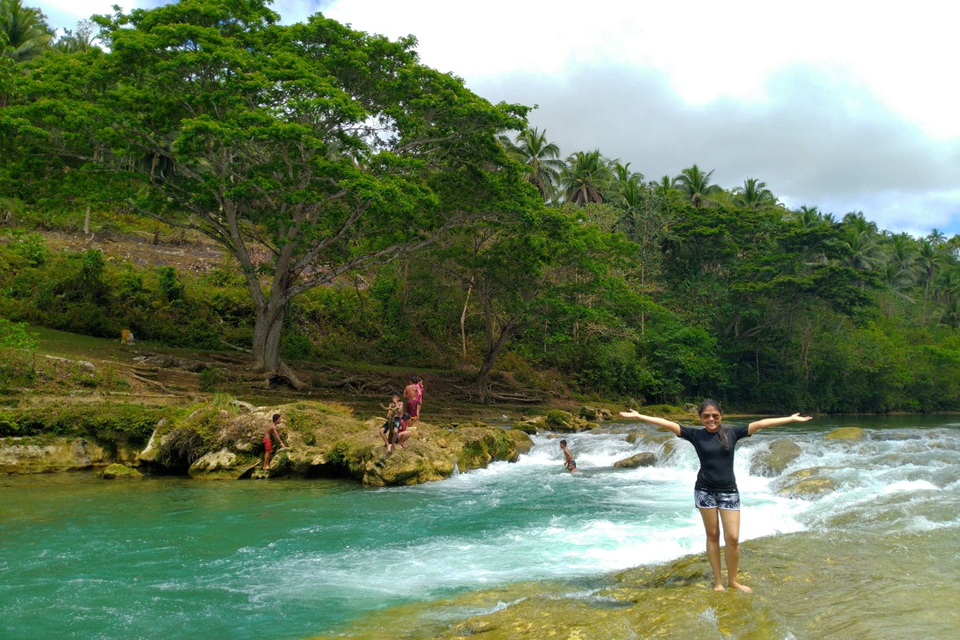 What makes Bohol unique is the fact that it’s no one-trick pony. It has the Chocolate Hills on land, the Panglao beaches at sea and a slew of other attractions in between.

These sites have catapulted the province to be among the country’s top tourism draws with its major attractions already known by tourists from far and wide. However, there are still several destinations that have been kept as secrets, places only a handful of locals enjoy all to themselves.

One of these hideaways is the so-called Tingkawob River in Sevilla town.

Tingkawob’s cool and crystal-clear water and the picturesque flora that surround it make it more enchanting than the downstream and more popular portion of the river in the adjacent municipality of Loboc.

Tingkawob is still technically part of the world-renowned Loboc River, but locals have decided to name the short stretch of the 22-kilometer river which cuts across the village of Calinginan Norte, Sevilla—perhaps rightfully so as it offers a different charm from its Loboc counterpart.

“It offers a breathtaking view of the jade-green waters of Sevilla and entails a relaxing ambience suitable for nature lovers,” said Chad Clarin, 28, a native of Sevilla.

Clarin, who has been going to the river since his teenage years, way before the advent of social media which spurred Tingkawob’s popularity among locals, said that “Tingkawob” means “rapids” which pertain to the gushing water in a portion of the river.

“I have already been in that paradise for a number of times and I assure you guys that you’ll have the experience you deserve,” he said. “Each visit is a wonderful and a new experience no matter how many times you have been there.”

This hidden gem which is tucked in a small barangay with a population of just over 700 people is located some 25 kilometers from Tagbilaran City, which is about 45 minutes away from Sevilla.

Just a 15-minute drive from the town’s central district and a short five-minute trek from the village road, and you can reach Tingkawob and take a dip in its pristine water.