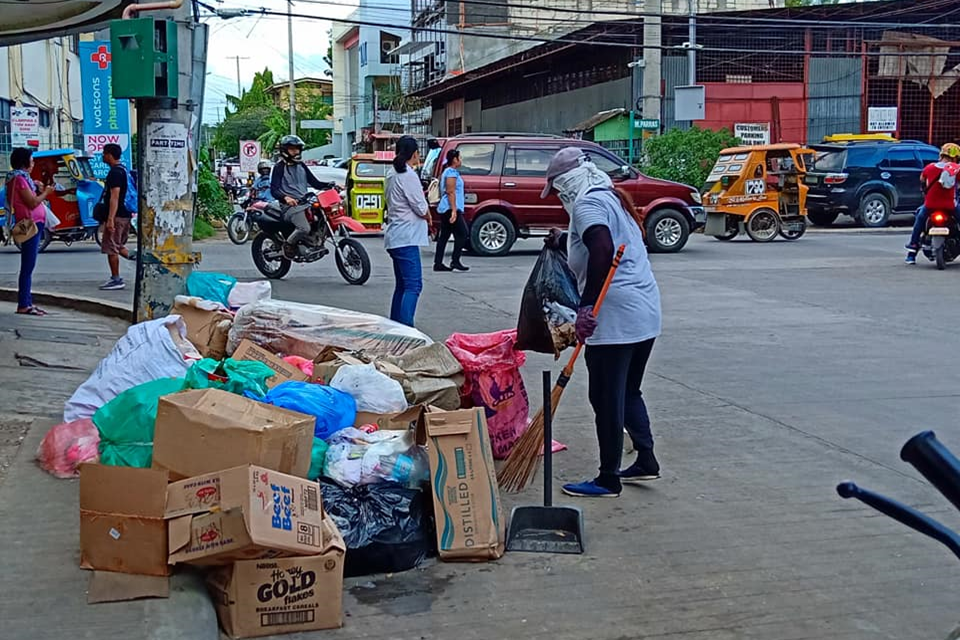 An estimated 40 tons of garbage generated daily by over 25,000 households and hundreds of business establishments and institutions in Tagbilaran City remain uncollected since Wednesday evening after the Department of Environment and Natural Resources (DENR)-Environment Management Bureau EMB) chained the steel doors leading to the open dumpsite located in Sitio Candauit, Barangay Dampas.

The closure of the seven-hectare dumpsite caught city government officials by surprise even as talks circulated that the sudden shutdown of the operation of the open dumpsite was a staged prelude for the eventual sale and construction of an upscale housing enclave by an influential property developer.

Owned by the city, only a third of the area is utilized as a dumpsite with a deep crevice used as a dumping area for garbage drawn by backhoes from piles of trash from the city and allegedly from neighboring towns.

Starting tomorrow, November 25, 2019, all city garbage trucks will not accept unsegregated trash from households as it will strictly implement waste segregation at source as mandated by Republic Act No. 9003 known as the “Ecological Solid Waste Management Act of 2000.”

Joselito Elle Taladua, Head of the Solid Waste Management Office told the Chronicle that households should be ready to hand over segregated trash or face a firm refusal to accept from garbage collectors.

Antiporda told the media that the closure was brought about by a complaint received by the Presidential Complaint Center of the Office of the President popularly known as “8888,” a 24/7 national public service hotline open to all requests for assistance, information, complaints, and grievances of the general public.

A check with officers of the Camella Homes Village Association belied the rumors circulating that the complainant came from the homeowners residing in the village owned by Vista Land with former Senator Manuel B. Villar, Jr. sitting as Chairman of the Board.

Camella Homes is located in Barangay Bool and was constructed during the administration of former City Mayor Atty.Dan Neri Lim.

With complaints of unbearable stench from the burning of waste in the dumpsite coming from residents of Habitat Village in Barangay Bool and the impending influx of new residents in Camella Homes, Lim was forced to stop the practice, according to employees of the dumpsite.

Geographically, Sitio Canguining, Barangay Libertad, Baclayon is located nearest the dumpsite and logically the complaint would emanate since the main dumping activity is concentrated within the area where several new housing units are situated.

A ranking official of the City Solid Waste Management Office told the Chronicle that is was plausible that the complaint that triggered the closure came from a resident of a newly built house in Canguining.

Antiporda was visibly aghast over the indiscriminate dumping of waste materials without due planning and consideration for environmental and health standards.

Leachate or contaminated liquid oozing from waste undergoing decomposition were clearly visible before the DENR-EMB team and media during the site inspection.

The closure of the facility means that it is not anymore allowed to accept disposal of any type of waste and any person or entity who shall act in contravention of the closure order shall be liable to the law, according to Antiporda.

Upon learning of the closure order, Tagbilaran City Mayor Geesnell ‘Baba” Yap called an emergency meeting will all the fifteen barangay officials to map out an initial strategy to minimize negative results of the order.

RA 9003 stipulates that segregation and collection of solid wastes shall be conducted at the barangay level specifically for biodegradable, compostable and reusable wastes.

With remedial measures fast taking shape which should have been implemented in 2005 or five years after the enactment of RA 9003, Tagbilaran City should heave a sigh of relief that the DENR did not come hard over the compliance of the law.

According to Antiporda, the DENR “cannot permit Tagbilaran City or any other areas to continue operation of the open dumpsite with the high presence of leachate which provides high risk on public health and may contaminate the groundwater and water table.”

However, the DENR through the EMB 7 will provide technical assistance to the LGU on how to come up with a better system in managing their solid waste, according to Antiporda. (Chito M. Visarra)