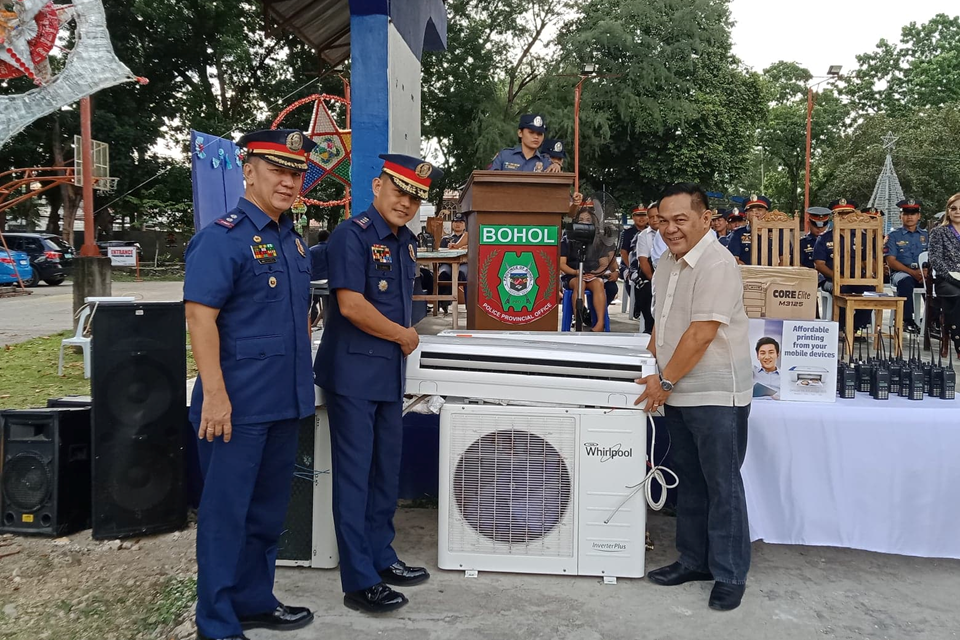 The Bohol Provincial Police Office (BPPO) received on Monday nine brand new motorcycles from the Philippine National Police (PNP) to improve its capability in patrolling villages, particularly in the municipalities.

A total of 20 Motorala handheld radios from the PNP, four air-conditioning units from the provincial government and two computer sets from the Armed Forces and Police Savings and Loan Association, Inc. (AFPSLAI) were also handed over to the provincial police command.

These were blessed by Fr. Ryan Real.

According to Cabal, the nine Honda XRM motorcycles were allotted for the police stations in Antequera, Batuan, Bilar, Jagna, Loon, Sevilla, Sikatuna, Talibon and Valencia.

The handheld radios meanwhile were given to the Carmen and Batuan Police Stations.

“I expect that the chiefs of police will only [allow] designated drivers or riders will be the one to ride the motorcycles so that there will be accountability,” said Cabal.

The air-conditioning units will be installed at the BPPO headquarters while the two computer sets will be handed over to the Provincial Investigation and Detective Management Branch(PIDMB) and Women and Children’s Protection Desk Office (WCPDO).

“I encourage those drivers and the riders of the motorcycles to take care of our logistics. You should be good steward of our logistics because bihira tayo magkaroon ng logistics and we don’t know if the next President, will be as generous as President Rodrigo Roa Duterte,” the BPPO chief said.

Department of Transportation Sec. Arthur Tugade on Wednesday said that he will push for the establishment of a Land Transportation…

SP united in purchasing vehicles for their offices; Balite opposes

Department of Transportation (DOTr) Sec. Arthur Tugade is set to arrive in Bohol on Wednesday to check on two big-ticket…

The incoming director of the Bohol Provincial Police Office (BPPO), Col. Osmundo Salibo, arrived in the province on Monday night…