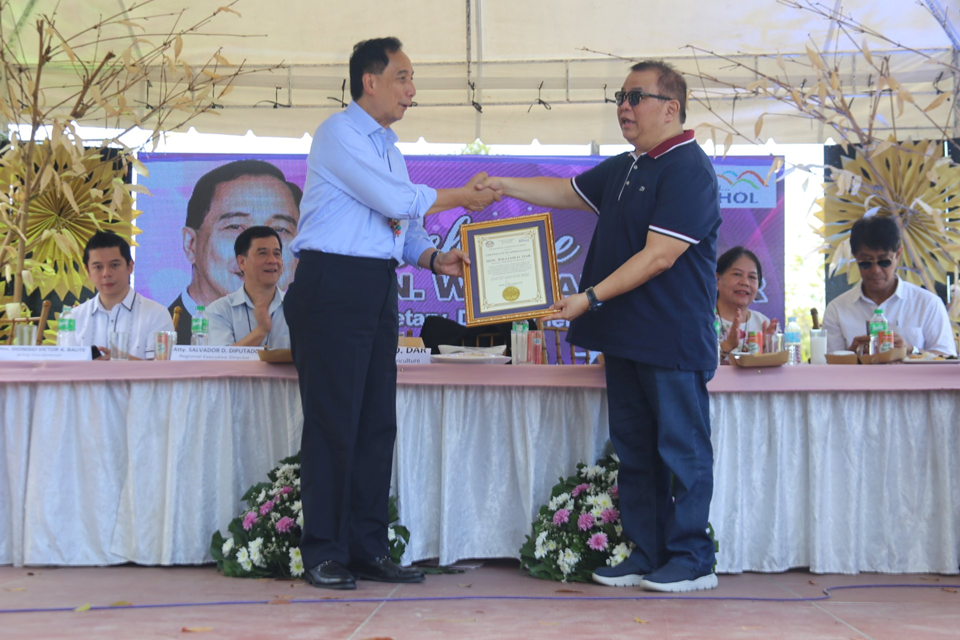 The Department of Agriculture (DA) turned over and committed to allocate P380 million worth of agriculture and fishery programs and projects to the province of Bohol during the 20th Ubi Festival in Tagbilaran City on Tuesday.

On top of that, Dar committed P42 million to the province for mangrove rehabilitation, nursery facilities, and seedlings propagation project.

The Landbank of the Philippines turned over P11.75 million for the Expanded Survival and Recovery Assistance for the rice farmers (SURE-AID) program, benefitting 750 rice farmers tilling one hectare and below.

“Bohol will be part of the second tranche of the cash assistance,” Dar said.

For the fisheries sector, the regional office of the Bureau of Fisheries and Aquatic Research (BFAR) committed P40 million for various projects.

The Bureau of Soils and Water Management also turned over the Land Suitability Map for coffee and cacao to the province of Bohol.

“Starting today, the BSWM will partner with the Bohol Island State University (BISU) for a soils and water conservation program,” Dar announced.

He also pledged P24 million for two small water-impounding projects (SWIP) and another P50 million for the establishment of a Solar Power Irrigation System in Bohol.

Also during the event, Dar signed three Memoranda of Agreement (MOA), which aim to improve farmers’ productivity and profitability. These include an agreement with BSWM for the establishment of Soils and Water Laboratory and Extension Services in Carmen, Bohol worth P20 million; a Tripartite Agreement between Department of Education (DepEd) and Department of Interior and Local Government (DILG) for the implementation of “Entrepreneurial Gulayan sa Paaralan”; and an agreement with the Bohol Institute of Technology International College (BIT-IC) for the massive seedlings production for upland agroforestry worth P6 million. (PR with A. Doydora)