PCR test not needed to enter Bohol for those aged 4, below
Advertisement

PCR test not needed to enter Bohol for those aged 4, below

PCR test not needed to enter Bohol for those aged 4, below

Those aged four years old and below no longer need to undergo RT-PCR test prior to travelling to Bohol, an official said Monday after the provincial government amended entry protocols in the province.

According to Provincial Disaster Risk Reduction and Management Office chief Anthony Damalerio, the province will not require negative test results from those aged below five when they enter the province as directed by the Department of Health (DOH).

The policy however was no longer included as among provisions in Executive Order No. 17 which was signed by Governor Art Yap last week.

Yap’s order stipulates that any person may enter Bohol without undergoing quarantine if he presents a negative result from an RT-PCR test conducted within 72 hours prior to arrival.

The directive also waives the previous requirement for additional testing for those who wish to stay in Bohol for more than three days.

Meanwhile, those who will opt to have themselves tested upon arriving in Bohol will have to undergo quarantine until they yield a negative result from an RT-PCR test.

If the arriving person has a four-year-old, or someone younger, with him, the child will have to be quarantined with him as well. (R. Tutas)

Over 3,000 children sign up for Tagbilaran COVID-19 vaccination drive 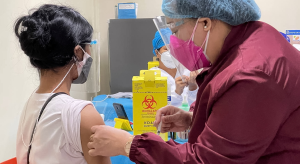 Some 3,250 vials containing 7,040 doses of Sputnik V’s Component II, which have long been awaited by tourism workers who…

NOTE: THIS STORY WAS FIRST PUBLISHED IN THE BOHOL CHRONICLE’S SUNDAY PRINT EDITION. Amidst the continued increase in the number…

Tagbilaran pushes through with vaccine purchase

NOTE: THIS STORY WAS FIRST PUBLISHED IN THE BOHOL CHRONICLE’S SUNDAY PRINT EDITION. The city government purchased P9 million worth of…