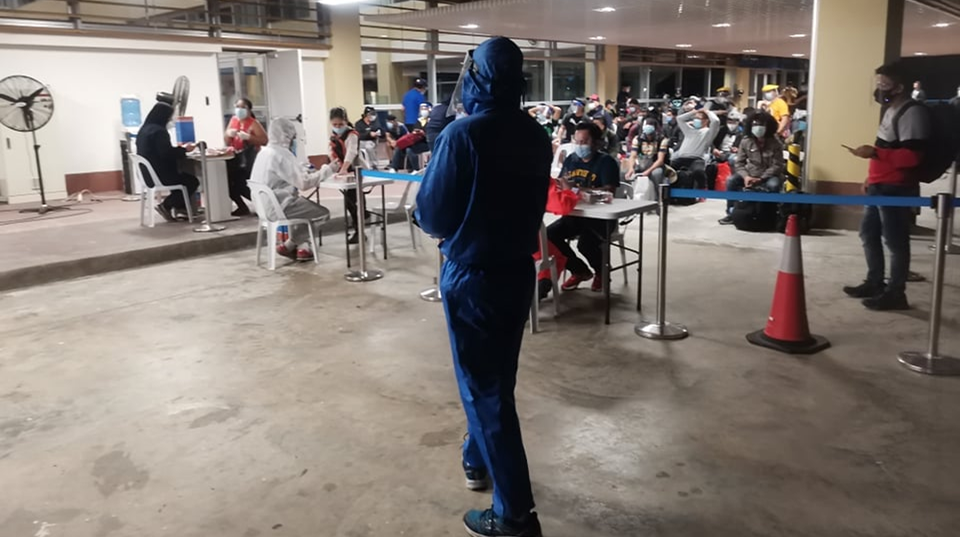 Here’s the latest on the much criticized heath protocol in the province.

Returning Boholanos residing in any part of the country can come home with only one requirement which is the Vaccination Card, but, only for those fully vaccinated.

This is also true for visiting tourists.

Those unvaccina-ted are still required to get their negative RT-PCR or saliva test results.

This latest directive on health protocol was issued by Gov. Art Yap, few hours after gubernatorial bet, Rep. Aris Aumentado announced that he made available funds at the Department of Health (DOH-7) for returning Boholanos based in Cebu to defray their expenses for their RT-PCR or Saliva Test which was earlier required by the Bohol Inter-Agency Task Force.

In his Executive Order 52-B, Gov. Yap said that effective immediately, Vaccination Card issued by any LGU or DOH-Accredited Medical Institution, Private Company, Foreign Country or State will be the only requirement needed for returning Boholanos.

For unvaccinated or partially unvaccinated persons, the 72-hour negative RT-PCRT or Saliva Test will still be required.

The much-criticized S-Pass which was earlier included as a “must” requirement for returning Boholanos was also given a relaxed policy since the new EO of Gov Yap said that S-Pass Travel Permit will be accepted “either approved or pending approval.”

In a statement issued to the Chronicle last night, Aumentado strongly criticized the governor for making it difficult for Boholanos to come home when he can just decide even without consulting the BIATF as he always claims to do in all issuance of  COVID-related directives.

“Four hours after I posted the announcement for a free RT-PCR for Boholanos residing in Cebu, the governor immediately changed the protocol by issuing a new Executive Order,” the solon said.

Earlier, Gov Yap also made a sudden change of his EO on health protocol which then required the Vaccination Certificate (VaxCert) only to find out that the system in getting said certificate online was not yet fully operational due to a delay in the posting of names of those vaccinated.

The delayed posting of names was admitted by the national agency handling the VaxCert website.

Together with this earlier pronouncement of Gov. Yap, the Bohol policy insisted that those who can not get the Vax Certificate, will be required to have their negative RT-PCR or Saliva test results (within 72 hours in entering Bohol).

This generated strong criticism from the cross-section of the Boholano community.

Due to mounting criticism citing the expense to be incurred in having the RT-PCR or Saliva Test, Rep. Aumentado allocated funds to pay for the RT-PCR and Saliva Test for Boholanos residing in Cebu who have been wanting to come home especially for the holidays on All Saints and All Souls Day.

But a few hours after,  the Aumentado fund assistance offer turned out to be useless since Gov Yap issued a new order saying there will be no more RT-PCR or Saliva tests needed for returning Boholanos, but just a vaccination card issued in any part of the country.

In issuing his latest directive yesterday, the governor said this new protocol is designed to encourage vaccination by giving fully vaccinated individuals the “liberty to movement and travel.”

The EO cited that with several Boholanos coming home for this Undas long weekend, focal persons were overwhelmed with applicants for S-Pass.

The same EO said “there is still a need to obtain S-Pass Travel Pass for recording and monitoring purposes citing however that it is “no longer the fault of the travelers if their requests remain pending and they should be allowed to travel upon complying with just the Vaccination Card and a government-issued ID.

As a safeguard against the proliferation of fake vaccination cards, the undertaking of the S-Pass application of travelers shall bind them and shall be the basis of criminal prosecution should they use and submit tampered or falsified Vaccination Cards.

The allowing of just the vaccination cards is just temporary “until such time the DOH website  vax.cert.doh.gov.ph shall be rendered fully operational”.