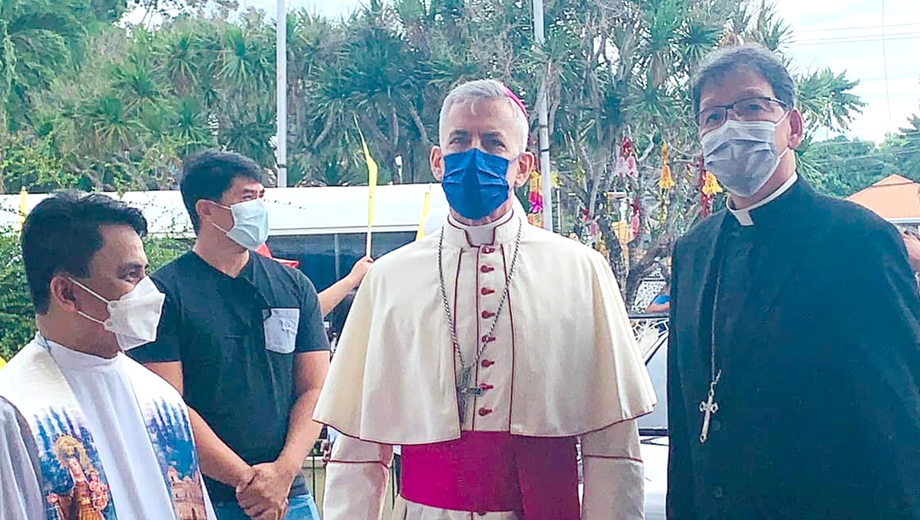 Apostolic Nuncio to the Philippines, Most Rev. Charles John Brown and  His Excellency Jorge Moragas Sanchez, Spanish Ambassador to the Philippines will be the guests of honor during the formal turnover of the Holy Cross Parish Church, one of the devastated churches during the 2013 strong earthquake which hit the province.

The nuncio who represents Pope Francis arrived at the Bohol Panglao International Airport at 10:40 yesterday morning with planeside military arrival honors as he was welcomed by church leaders, Bishop Alberto Uy, Bishop Patrick Daniel Parcon of the Dioceses of Tagbilaran and Talibon, respectively.

Upon arrival, he visited other restored churches like the Assumption of Our Lady Shrine-Parish in Dauis town, the centuries-old Immaculate Conception Parish in Baclayon town.  He celebrated the Holy Mass at the St. Joseph Cathedral yesterday.

The two visiting dignitaries are the guests during the formal turnover of the Church at 8:30 this morning.

The ceremonial unveiling of the new marker of the National Historical Churches of the Philippines while a Holy Mass will be officiated inside the restored church as a formal dedication of the Church.

The National Museum of the Philippines (NMP) culminates its restoration and reconstruction of quake-hit-damaged centuries-old heritage structures in Tagbilaran City.

Ambassador Sanchez will deliver a special message, while President Rodrigo Roa Duterte will be represented by Sec. Leoncio Evasco, presidential adviser on Streamlining of Government Processes, to read the president’s message for the turnover.

Other messages will be delivered in person by Gov. Arthur Yap and Cong. Edgar M. Chatto.

Director-General Jeremy Barns, CESO III, of the national museum will then do the turnover and his speech followed by a commemorative documentary video of the church.

Bishop Uy will deliver acceptance speech and message of gratitude, while the signing of the sertificates of turnover and acceptance and unveiling of NHCP marker will follow.

Mass of the Dedication of Maribojoc Parish Church and Diocesan Shrine and Pontifical Mass will be officiated by Bishop Uy with Most Rev. Charles John Brown as homilist.

The Holy Cross Parish Church, Diocesan Shrine of St. Vincent Ferrer, is one of two Spanish colonial period churches completely destroyed by the 7.2 magnitude earthquake that struck Bohol and its neighboring islands on October 15, 2013.

The other church, the Our Lady of Light Parish in Loon, a town adjacent to Maribojoc, had already been turned over to the same diocese last September 7, 2021. Reconstruction of both churches had been implemented by the NMP, a cultural agency responsible for various culturally significant properties, sites and reservations throughout the country.

Prior to its destruction, the church complex of Maribojoc which includes the stone masonry church and convent, its side plazas and the stone stairway at the back of the church, was declared National Cultural Treasure by the NMP on May 5, 2010. The declaration officially recognizes Maribojoc Church as a unique cultural property, possessing outstanding historical, cultural, artistic and scientific value highly significant and important to the country and nation. The site, due to its colonial architecture representative of the Spanish colonial period, had also been listed by the National Historical Institute (now National Historical Commission of the Philippines) as a historic center/ heritage zone. A new historical marker by the NHCP will be unveiled during the ceremonial turnover.

Unique to the church are its neo-Gothic and Mudejar-styled retablos incorporated with local motifs. Its ceiling paintings executed by Cebuano master painter, Raymundo Francia, is a fine example of early 20th-century ecclesiastical art in the Visayas. Both elements of the church have been meticulously restored by local artists, guided by expert art restorers and conservators.

The massive feat of reconstructing and restoring the damaged heritage structures of Bohol, including the church in Maribojoc, is the result of the collective and collaborative efforts of the national government, LGUs, contractors and stakeholders. Eight years since the Bohol earthquake, the NMP has restored the heritage church complexes of Loboc, Dimiao, Alburquerque, Cortes and Panglao; reconstructed the churches of Loon and Maribojoc, as well as the watchtowers in Loay, Pangalo and Balilihan. The Escuela Niña, a Spanish school building, and the Plaza Rizal in Bohol’s capital, Tagbilaran City, have also been restored by the NMP and turned over in June of this year. In 2018, the National Museum Bohol relocated to its new home, the former Provincial Capitol, which was also damaged during the quake and restored by the NMP.

Archbishop Romulo Valles, former president of the Bishops Conference of the Philippines (CBCP) arrived yesterday together with other Boholano church leaders, Bishop Antonietto Cabahug and Bishop Crispin Varquez. Valles is a native of Maribojoc town. (With NM PR)