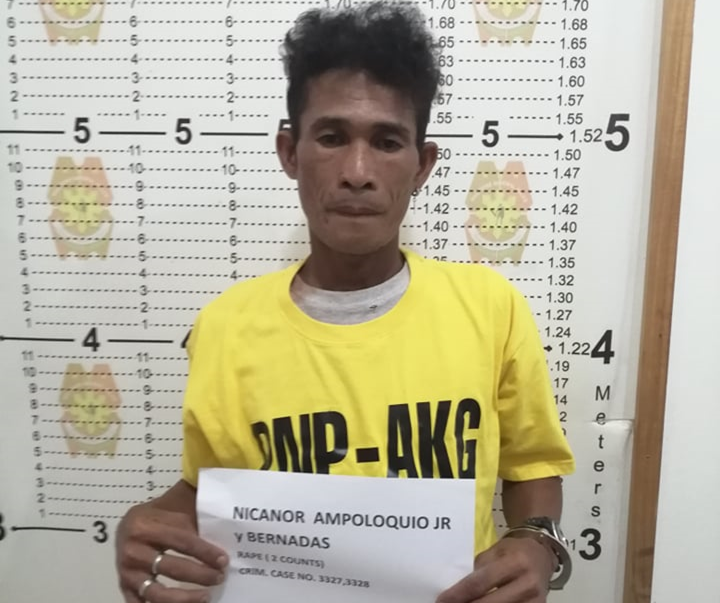 The second most wanted person in Candijay who is facing charges for raping a seven-year-old girl was arrested by police in Dimiao town on Wednesday.

Joint police operatives of the Anti-Kidnapping Group and the Dimiao and Candijay Police Stations collared Nicanor Bernadas Ampoloquio, 40, who is a construction worker at a bunkhouse in Barangay Puangyuta, Dimiao where he has been in hiding for almost a year, said Candijay police chief Major Jaime Dulcero.

Ampoloquio, a resident of Candijay town, was apprehended by virtue of an arrest warrant issued by Judge Adonis Laure, presiding judge of the Regional Trial Court Branch 51 in Carmen.

The suspect who is facing two counts of rape fled Candijay after the warrant came out in September 2020.

It was the AKG that eventually traced the location of Amploquio in Dimiao.

According to the police chief, the alleged rape incidents transpired in November, 2017 and February, 2018.

However, it was only in July, 2020 when the victim’s grandmother reported the incident to police.

Based on the police’s probe, the suspect was known to be close to the victim’s family which granted him free access to their home.

Ampoloquio was detained at the Dimiao Police Station and was set to be transferred to the Candijay Police Station pending the issuance of a commitment order against him.

He will not be eligible to post bail for his temporary liberty as rape is a non-bailable offense. (A. Doydora)