Tagbilaran through the years 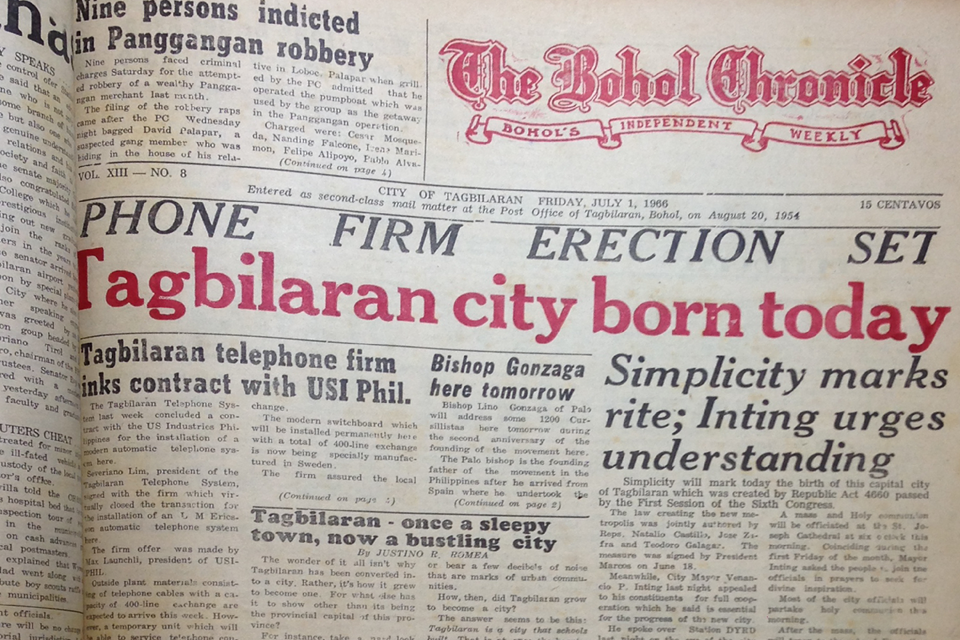 Tagbilaran through the years

“Tagbilaran city born today”—thus, goes the banner headline of The Bohol Chronicle 53 years ago, on July 1, 1966.

The story proceeds stating how simplicity marked the rites accompanying the birth of the Bohol’s capital, the City of Tagbilaran which was created by Republic Act 4660 and passed by the First Session of the Sixth Congress. The law enacting the new city was jointly authored by Rep. Natalio Castillo, Jose Zafra and Teodoro Galagar and was signed by President Ferdinand Marcos on June 18, 1966.

In the eve of the inauguration, the Tagbilaran City Mayor Venancio P. Inting spoke over Station DYRD urging the city residents to “assist in the moral and spiritual uplift of the community as paramount to its existence.” He stressed that his administration needs the spiritual assistance of all to guide him in steering the ship of state towards progress.

Since then, massive economic and infrastructure development has transformed Tagbilaran from a once-sleepy town into the bustling city that it has become today. The city has a strategic position as the center of education, hub of trade and commerce, as well as the seat of political power and for a long time, the primary gateway to the province of Bohol.

In recent years, state-of the art malls, shopping centers, hotels and restaurants have mushroomed in the city. Tagbilaran now offers adequate accommodation and dining facilities to tourists and other visitors. The city is the major provider of services, utilities and telecommunication facilities that connect the island to the rest of the world. Its tourist seaport provides access to travelers coming to Bohol.

Several centuries earlier before the coming of the Spaniards, there was, settled off the waters of Tagbilaran, a rich water-bound city known as the Bool or Dapitan Kingdom that was part of an extensive international trading network throughout Southeast and South Asia.It was in the early 1700s that Tagbilaran was made into a town. The year 1724 was when Tagbilaran has its own parish records. The creation of Bohol province on July 22, 1854, necessitated the appointment of a capital town. Tagbilaran was favored over Calape for the reason that it has a promising harbor.

But it was during the term of then Mayor Celestino Gallares that the urban plan for Tagbilaran was first launched in 1913. The so-called “Gallares Plan” created the streets and enlarged the town’s boundary defining its limits with “circumferential roads” that still exist up to this day. It was also during the time of Gallares that a municipal water system was installed and a new public market put in place, which eventually became what is now downtown Tagbilaran.