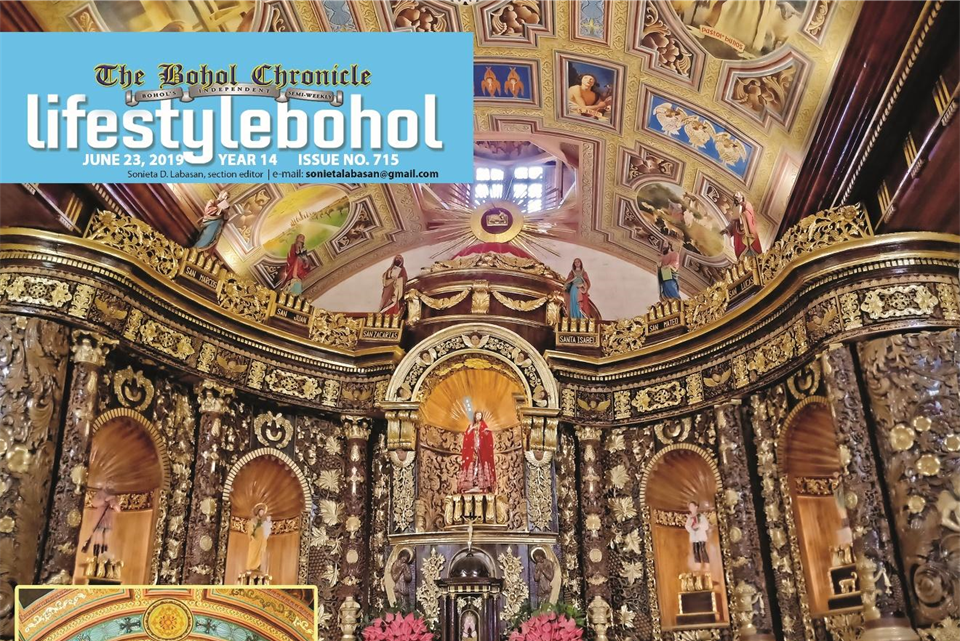 Garcia-Hernandez is the only town in the province of Bohol, which parish bears the name and is placed under the special protection of the one known as the “forerunner of Jesus,” St. John the Baptist, whose feast is celebrated with much revelry every 24th of June.

It was in 1859 when Bishop Romualdo Jimeno of Cebu issued an Ecclesiastical Order which officially established the “Parroquia de San Juan Bautista de Garcia – Hernandez”. That’s exactly 160 years ago and indeed, the parishioners have a lot of reasons to celebrate and be thankful for this year.

The 160th anniversary of the foundation of the Parish of St. John the Baptist is made more meaningful as parishioners and guests to the annual fiesta now behold a truly magnificent parish church – with its new and exquisitely-crafted altar retablos and ceiling painting, made possible by a truly grateful people who treasured a priceless heritage from their ancestors.

It may be recalled that March in1859 was the start of the construction of the first convent in Sinogboan, the former name of the place, which used to be a progressive barrio of Jagna.  Stone blocks were used for the construction. In May of the same year, Moro bandits attacked the place and the people took refuge in the church.  The inhabitants, led by Padre Dionisio Ballesteros, fought back and defeated the bandits; although, Teniente Mayor Cipriano Ladaga and Aguacil Mayor Marcos Cachila were seriously wounded.

Earlier, in 1853, a petition for the townhood of Sinogboan was forwarded to the Spanish authorities by the leaders of the community, which was supported and endorsed by two Recollect Priests: Fr. Jose Garcia based in Loon and Fr. Narciso Hernandez from the town of Guindulman.  On May 27, 1854, a decree was officially issued by the Governor General declaring the Visita de San Juan de Sinogboan as “Pueblo de Garcia – Hernandez”.

Thus, it was out of the people’s gratitude to those two priests that the town was named after them, Fathers Garcia and Hernandez.

In 1883, the parish church where it stands now was permanently constructed and five years after, on June 1, 1888, Fr. Jose Lasala del Carmen became the parish priest of the town. The 24 big posts inside the church were installed in 1893.  These giant posts were brought by the “polistas” or natives obliged under Spanish rule to render personal services.  These “forced laborers” were followed by a band as they carried the heavy logs.  There were times when a “polista” fell down due to the weight of the giant logs and one such casualty was Eusebio Ochavillo.  His hand was cut and he eventually died.

The hard labor and painful penalty given when one fails to render service, had caused thousands of natives leaving the town to settle in other places; some moving to as far as Leyte and Mindanao. To stop the exodus of Garcianhons, Fr. Jose Lasala devised a cable car to transport the logs down the deep Manaba River.  This was inaugurated by Fr. Ambrosio Yturriaga in September, 1894.

Today, the same large wooden posts can be seen supporting the church, a living testament of the sacrifices given by the town’s forebears.  It could also be viewed as analogous to the martyrdom of St. John the Baptist, who is considered as the “forerunner of Jesus”.

Fast forward to the present time, Father Felix Cleopas M. Silagan assumed as the new parish priest in Garcia Hernandez in 2015. The following year, a project was initiated to paint the then bare white ceiling of the church. However, upon inspection of the 24 wooden posts, it was found out that the base of some posts were already rotten and decayed, prompting the plan to reinforce the posts first. What followed was a series of restoration work from strengthening the footing of the old wooden posts, painting of the ceiling and the intricate carving of the main altar and side retablos to the overall uplift of the church reinstating the grandeur of its interior. In a span of three years, much has been accomplished that Fr. Silagan can hardly believe of what has been done; he attributes the achievement to the generosity of the faithful in the town. “Kini bunga sa mga paningkamot ug suporta sa mga tawo. Bilib ko kaau sa pagka-manggihatagon ug pagka-relihiyoso sa mga tawo dire… Hapit kada gabii naa’y makit-an mag-ampo, mag-rosario sa simbahan.”

There is a widespread affection of the parishioners to the Blessed Virgin Mary such that out of the 48 chapels, 31 have expressed devotion to the Mother of Perpetual Help, the town’s secondary patron, whose intercession was believed to have stopped a deadly plague affecting the town in the past.

With 98 per cent of the population being pious Roman Catholics, the Parish of St. John the Baptist has surely gone a long way carving a niche among the faithful in Bohol. Last year, the parish was conferred the Bishop Tumulak Basic Ecclesial Community Award as Outstanding Parish of the Diocese of Tagbilaran.

While still awaiting a public proclamation, the parish church has also been recently declared as one of the country’s most Important Cultural Properties. Indeed, a cause for celebration as the parish observes its 160th anniversary. (Sonieta Labasan)