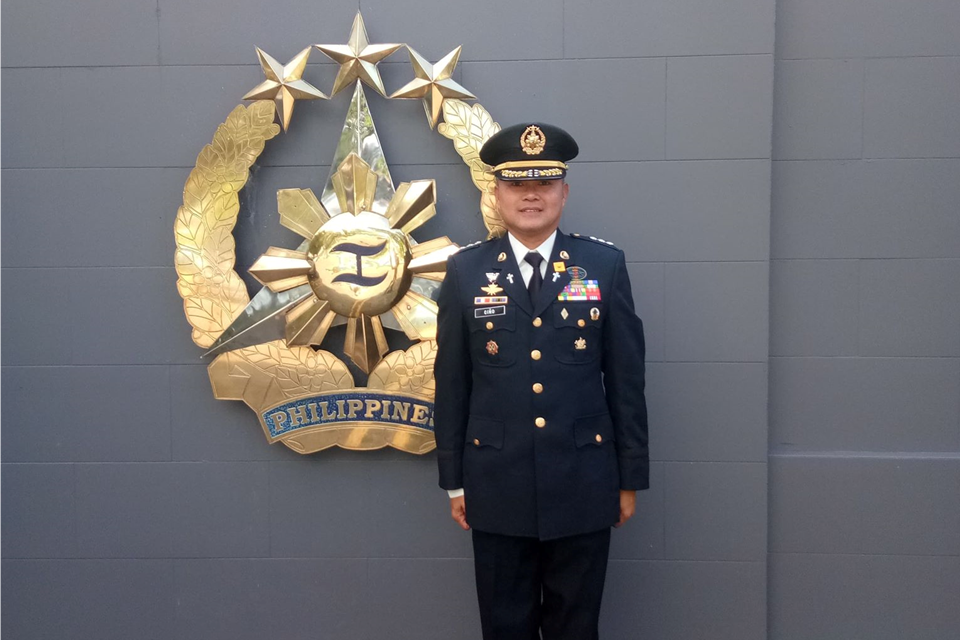 Boholano priest Rev. Fr. Raul Ciño, chief of the Chaplain Service of the Armed Forces of the Philippines (AFP), officially took oath as an army brigadier general before President Rodrigo Duterte in Manila on Monday.

Ciño, a native of Tagbilaran City, joined the oath-taking ceremonies along with other newly appointed generals and flag officers of the AFP and star-rank officers of the Philippine National Police at the Malacañang Palace.

The newly promoted general was accompanied by his sisters Corazon Deala and Clarita Pajo, both residents of Tagbilaran City, during the event where they met the President.

Ciño’s promotion was confirmed by the Commission on Appointments on September 25, 2019 and he was awarded his first star through a donning of ranks ceremony at the AFP headquarters in Camp Aguinaldo, Quezon City on November 12, 2019.

According to Ciño, he had to undergo several studies to be promoted as an army general.

In 2018, he earned a masters’ degree in national security administration from the National Defense College of the Philippines, a prerequisite for those seeking promotion to a general in the AFP.

Ciño has scaled the hierarchy of the AFP’s Office of the Chaplain Service and reached the top as the division’s chief on July 29, 2019 when he officially assumed office.

He is part of the AFP Chief of Staff’s technical and special staff, advising on “moral and spiritual” issues.

“Our office caters to the moral and spiritual needs of the entire armed forces,” Ciño said.

Chaplains of the AFP and its three branches are priests, imams and pastors who are deployed in various parts of the country and abroad.

Ciño who traces his roots to Barangay Manga in Tagbilaran City and is an alumnus of the Immaculate Heart of Mary Seminary was ordained priest in 1996. He joined the military service two years after in 1998 through the approval of the late Bishop Leopoldo Tumulak who was the bishop of the Military Ordinariate of the Philippines, and prior to that, bishop of the Diocese of Tagbilaran.

The newly minted general ascribed his path to become a priest in the military to the examples set by his late parents—his mother Realina Sabornido Ciño who he described as a devout catholic and his father Martin Ciño who was a second lieutenant in the Philippine Army.

“I somehow attribute, shall we say, my priestly side to my mother, sa Catholic values. Every day she went to Mass. My father was a retired lieutenant of the Army,” said Ciño.

Ciño also credited his Boholano roots for his perseverance in surmounting the obstacles he faced throughout his career as a priest in the military which has deployed him to various parts in Mindanao, Visayas, Luzon and even abroad in war-torn Syria.

“I reached the peak of my career as chief chaplain of the entire armed forces and I would attribute this na didto ko na train, na hone sa [Bohol] and at the same time I find consolation and inspiration in the religiosity and resiliency of the Boholanos,” he said.