(Reuters) – The National Basketball Association (NBA) said on Thursday (Manila time) it was suspending the season until further notice after a Utah Jazz player tested positive for the coronavirus.

The test result was reported shortly prior to the tip-off of a game between the Jazz and Oklahoma City Thunder at Chesapeake Energy Arena.

The league said the affected player, reportedly center Rudy Gobert, was not in the arena.

“The NBA is suspending game play following the conclusion of tonight’s schedule of games until further notice,” the league said.

“The NBA will use this hiatus to determine next steps for moving forward in regard to the coronavirus pandemic.”

“This can’t be true,” he told ESPN as his team played the Denver Nuggets.

“This is not in the realm of possibilities. This seems more like out of a movie than reality.”

The pandemic rocked the North American sports calendar on Wednesday, leading to the cancellation of the figure skating world championships and the announcement that college basketball’s annual ‘March Madness’ tournament would take place without fans in attendance. (REUTERS/Rory Carroll in Los Angeles)

Magsayo still undefeated; wins against Mexican in US bout

Bohol’s fighting pride Mark “Magnifico” Magsayo could be the next big thing in Philippine boxing when Manny Pacquiao, who is… 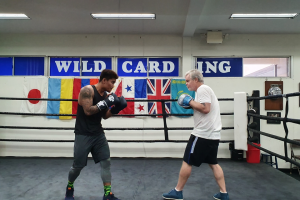 After a grueling battle against Naoya Inoue, Nonito “Filipino Flash” Donaire (45-6) took a much-deserved respite, and he chose to…