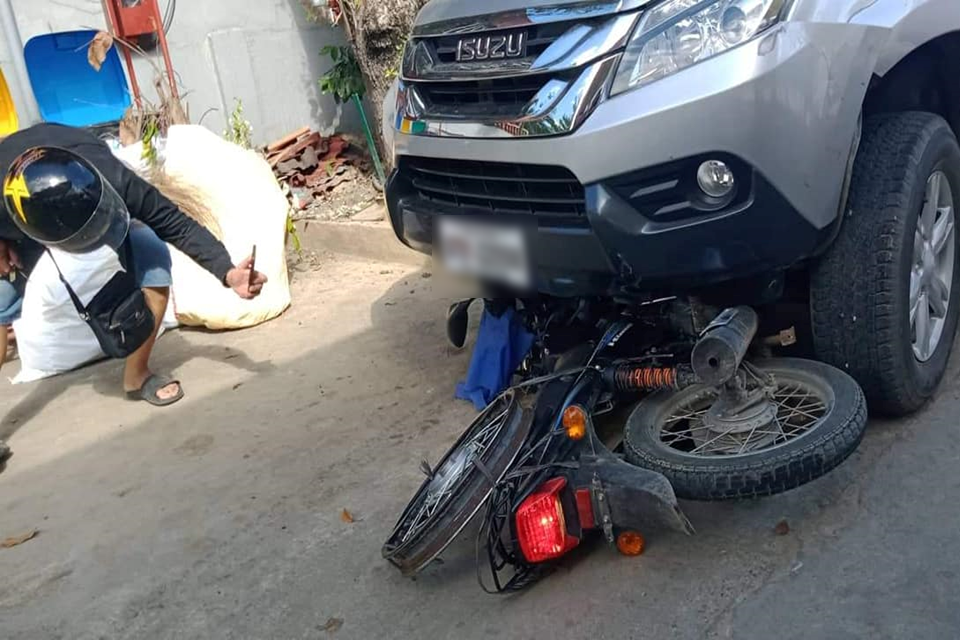 A man suffered multiple injuries after his motorcycle was accidentally rammed by a sports utility vehicle (SUV) driven by a female senior citizen along a national road in Tagbilaran City on Thursday afternoon.

The motorcycle and the Isuzu MU-X collided head-on causing the smaller vehicle to be briefly dragged along by the SUV near a gasoline station in Barangay Manga, said Corporal Majorico Arawiran of the Tagbilaran City Police Station.

The SUV’s driver, Llian Hegetschweiller, 67, of Tagbilaran City claimed that she accidentally stepped on the accelerator instead of the brake pedal causing her to head straight into the motorcycle.

Meanwhile, the motorcycle driver identified as Angelo Lumanta, 29, of Cortes town was rushed to the Governor Celestino Gallares Memorial Hospital in Tagbilaran City.

Arawiran said that Lumanta remained in stable condition but sustained several wounds across his body.

Both parties have reached an amicable settlement as Hegetschweiller assured payment for the victim’s medical bills.

The two ill-fated vehicles were placed under the custody of the Tagbilaran City Police Station for proper disposition. (A. Doydora)

A 51-year-old woman died after her motorcycle was rear-ended by pickup truck along a national road in Barangay Mansasa, Tagbilaran…

Two people died while three others were injured in two separate road mishaps in Ubay and Batuan over the weekend.…

Truck falls into ravine in Loboc

Man falls to death from house in Cortes